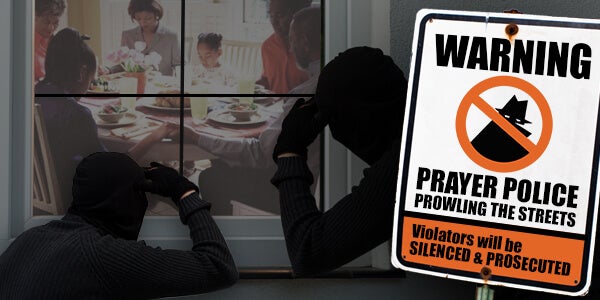 You could be at a high school football game, and before you know it, state officials could be silencing the players and coaches, prohibiting them from praying before or after the game.

If you think that’s farfetched, remember that this exact thing happened to the students at Cambridge Christian School, after officials from the Florida High School Athletic Association forbade the school from praying over the loudspeaker at a championship game. And now, First Liberty is fighting in federal court – only one level below the U.S. Supreme Court – to vindicate the rights of Cambridge students.

And of course, we must mention that school district officials told Coach Joe Kennedy that he could not pray silently after each game, and then fired him for doing so.

But the “bad calls” aren’t just happening on the football field. The Prayer Police has been rearing its ugly head even inside America’s armed forces, too. And who knows, your commanding officer, though in uniform, could very well be the Prayer Police in disguise.

Time after time, we’ve seen cases of entrenched “deep state” officials and commanding officers engaging in “unfriendly fire” toward the ranks. For one, these embedded officials have allowed anti-religious bias to fester, which has dragged distinguished chaplains like Chaplain Scott Squires and Captain Jeffrey Montanari into legal fights for their religious freedom, as well as their careers and their reputations.

Even decorated veterans are not immune to the Prayer Police’s censorship crusade. Right now, we are defending Air Force veterans Oscar Rodriguez and Chuck Roberson after uniformed Airmen assaulted and forcibly removed Oscar from Chuck’s retirement ceremony – all because of a speech that contained the word “God.”

Give today to stop “deep state” attacks on religious liberty.

And that’s not the worst of it. The Prayer Police could actually be walking through your neighborhood streets.

Don’t believe us? Just take a trip to Airmont, NY, where city officials with a long history of anti-Semitism are driving an Orthodox Jewish community underground, threatening a Rabbi with jail for hosting worship in his home.

And even in Dallas, TX, city bureaucrats have made Congregation Toras Chaim, another small orthodox Jewish community, jump through endless hoops just to hold their weekly gatherings in a private home. Why? Because disgruntled neighbors complained that these small religious gatherings supposedly caused parking issues. But here’s the truth: members of the congregation do not drive on their Sabbath!

If that wasn’t enough, it’s downright frightening that nowadays the Prayer Police could very well show up on your front yard. Imagine getting a knock on your door, with someone on the other side saying you can’t practice your faith in your own home!

It’s not a distant reality. Today, these types of attacks are happening in senior living communities where our parents or grandparents live. In two recent First Liberty cases, Ken Hauge of Virginia and Donna Dunbar of Florida are being harassed and intimidated simply for hosting Bible studies!

Ken, who is in his 80’s, was even threatened with eviction just because he wants to live out his faith. And Donna, who is in her 60’s, was outright forbidden from hosting any kind of religious gathering.

When, where, and who will the Prayer Police strike next?

With the rate of religious freedom violations happening today, it’s possible that the next attack could happen to anyone – including you – anywhere and anytime. And though many everyday Americans think such attacks could never happen to them, nowadays the Prayer Police could be hiding in plain sight.

If it does happen that you get hassled and harassed by the Prayer Police, don’t forget: First Liberty attorneys are first in the fight for you and your religious freedom, and we won’t let them get away with violating and trampling your constitutional rights.