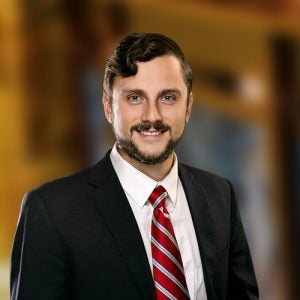 University of Florida College of Law

Jordan Pratt is senior counsel at First Liberty Institute and works in its Washington, DC office. Before joining FLI, Jordan served in various roles in state and federal government: as senior counsel in the U.S. Department of Justice, deputy general counsel in the U.S. Small Business Administration, and deputy solicitor general in the Florida Office of the Attorney General. At the Department of Justice, Jordan advised the White House on judicial nominations and worked to secure the confirmation of numerous federal judges. As a Florida deputy solicitor general, he defended Florida’s most important policies at every level of the state and federal court systems, with successful arguments before the U.S. Court of Appeals for the Eleventh Circuit, the Florida Supreme Court, and Florida’s First District Court of Appeal.

After law school, Jordan served as a law clerk to the Hon. Harvey E. Schlesinger on the U.S. District Court for the Middle District of Florida and the Hon. Jennifer W. Elrod on the U.S. Court of Appeals for the Fifth Circuit.

Jordan has held several fellowships, including an Olin–Searle Fellowship at Florida State University’s College of Law, and has published scholarship in the Tennessee Law Review, the Nebraska Law Review, and the Mississippi Law Journal.

*Licensed to practice in Florida and the District of Columbia.

April 2022 A Tale of Two Colleges: The Right Way (and the Wrong Way) to Handle the Gender Debate

It’s a bedrock principle of our constitutional democracy that the government may not compel citizens to speak messages that violate their convictions. This principle applies with full force in our public schools, colleges and universities. As the Supreme Court famously put it 79 years ago when rejecting the compulsory Pledge of Allegiance, public institutions may not “prescribe what shall be orthodox in politics, nationalism, religion, or other matters of opinion or force citizens to confess by word or act their faith therein.”

As COVID ravaged the nation, far too many Americans became homeless. Statistically, there is little doubt homelessness increased last year. Some analysts believe it was even worse than the numbers show. The city of Tallahassee was no different, facing a pandemic-induced homelessness crisis during winter while many shelters closed their doors.