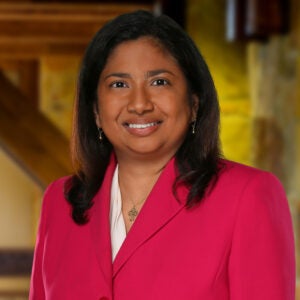 Prior to joining First Liberty, Ms. Noronha served from 2017 to 2021 at the U.S. Department of Health and Human Services (HHS) in multiple appointed roles, including acting chief of staff and principal policy advisor at the Administration for Children and Families, senior advisor to the Director of the Office for Civil Rights within the Office of the Secretary, and regulatory reform officer. She proposed and implemented new reforms to protect conscience and religious freedom rights across the Department’s $1.7 trillion of federally funded programs and activities. Previous work in federal service has also included positions in the White House, U.S. Senate, and U.S. House of Representatives.

Outside government, Ms. Noronha practiced civil rights law at a major Washington, D.C. law firm, where she practiced trial and appellate litigation, served as outside counsel to federal and state government officials, and advised clients on legal compliance and federal policy. She also worked at several non-profit organizations focusing on civil justice reform.

Ms. Noronha was named one of Forbes’ 30 under 30 in Law and Public Policy. Ms. Noronha graduated Phi Beta Kappa from Georgetown University, where she received both her Bachelor of Arts in Government and Juris Doctor. At Georgetown University Law Center, she was current development editor of The Georgetown Journal of Legal Ethics, and published a note entitled, “Removing Conscience from Medicine: Turning the Hippocratic Oath into a Hypocrite’s Pledge.”

Ms. Noronha is admitted to practice in the District of Columbia, Pennsylvania, U.S. Court of Appeals for the Fourth Circuit, U.S. Court of International Trade, and the U.S. Supreme Court.