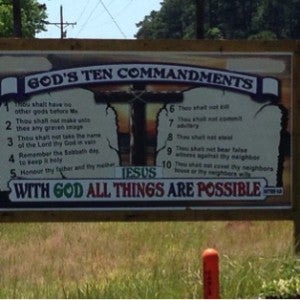 In February 2014, the Texas Department of Transportation (TXDOT) ordered Jeanette Golden to remove a Ten Commandments sign she had placed on her private property near Hemphill, Texas. TXDOT stated her sign was noncompliant with requirements for “outdoor advertising” and later stated that signs were completely prohibited on her property that is adjacent to a state highway. In May 2014, First Liberty sent a demand letter to TXDOT on Mrs. Golden’s behalf, and in September 2014, First Liberty and TXDOT jointly announced a rule change that allowed Mrs. Golden to keep her sign conveying a religious message.

In August 2013, Mrs. Golden acquired a 6 x 12-foot sign depicting the Bible’s Ten Commandments from the organization God’s Ten. She placed the sign on her private property located near Hemphill, Texas, which is in Sabine County.

In February 2014, Mrs. Golden received a removal notice from TXDOT stating that her sign was non-compliant with Texas law for “outdoor advertising.” TXDOT issued the notice despite the fact that the sign was not commercial and ordered Mrs. Golden to remove her Ten Commandments sign within forty-five days.

Wanting to protect her freedom of speech and defend her religious liberty, Mrs. Golden attempted to work with TXDOT to find out what she needed to do to keep her sign, including removing the reference to the website for God’s Ten from the sign. However, TXDOT informed Mrs. Golden that she needed to obtain an Outdoor Advertising License, a minimum $2500 surety bond, and a permit. If Mrs. Golden didn’t obtain a permit and an Outdoor Advertising License, she could be subject to two different fines that were each between $500 and $1000 per day.

Mrs. Golden decided to take some time to consider her options and contemplated the substantial time and money it would take to satisfy TXDOT’s requirements. But in an email on April 17, 2014 to TXDOT employees and later received by Mrs. Golden, TXDOT Associate General Counsel Ronald Johnson stated that no signs could be displayed along the road, writing that, “upon further investigation,” the sign was along a road that is “statutorily prohibited from having signage at all and thus the sign cannot be permitted.” In an email later in the day, Johnson wrote, “the sign cannot be permitted” and “no permit is possible.”

However, the ban on signs asserted by the TXDOT Associate General Counsel Ronald Johnson had not been previously enforced. In fact, commercial signs had been permitted with a license, bond, and permit and continued to be allowed even after the Johnson’s statements. In effect, the ban asserted by Johnson prohibited only non-commercial signs.

Johnson also joked in an earlier email that he “wonder[ed] how they’d feel about a quote from the Quran?”

The letter explained that TXDOT’s ban violated Mrs. Golden’s right to freedom of religious expression and stated that the ban specifically violated the Texas Religious Freedom Restoration Act (TRFRA), the federal Religious Land Use and Institutionalized Persons Act (RLUIPA), the First Amendment to the United States Constitution, and Article I, Section 6 of the Texas Constitution. The letter gave TXDOT 60 days to respond and it requested that TXDOT immediately rescind its ban and removal order and allow Mrs. Golden to keep the religious sign on her private property.  Click here to view a copy of the demand letter.

“It is outrageous that TXDOT prevents Texans from having signs on their own private property,” Liberty Institute Senior Counsel Mike Berry said at the time. “Religious freedom and private property rights are some of the most sacred rights Texans and Americans enjoy, dating back to the founding of Texas and our nation.  It is also shocking that a TXDOT attorney would belittle the religious beliefs of Texans.”

In addition, Texas State Representative Dan Flynn spoke out in favor of Mrs. Golden’s efforts to save her sign. “I am shocked that TxDOT would ban a Ten Commandments sign given the robust protections the Texas legislature passed in favor of religious liberty and [am] extremely troubled by this government overreach against private property rights that is against everything our state stands for,” said Rep. Flynn, who was Co-Chairman of the House Select Committee on Transparency in State Agency Operations.

TXDOT responded positively to First Liberty’s demand letter and acknowledged that its rule was likely unlawful. The agency agreed to revise its rules regarding non-commercial signage on private property in order to protect individuals’ rights to freedom of speech.

In September 2014, First Liberty and TXDOT jointly announced an official change to TXDOT’s rules and regulations regarding private speech on private property. The rule change allowed Texans like Mrs. Golden to freely express their religious beliefs on their private property.

With the change in policy, signs that do not exceed 96 sq. ft. in size, sit on private property, and do not promote a business are exempt from the license, bond, and permit requirements that apply to commercial signs. Mrs. Golden’s Ten Commandments sign is 72 sq. ft. in size.

In TXDOT’s letter to Mrs. Golden announcing the new exemption, TXDOT Associate General Counsel Ronald Johnson thanked Mrs. Golden and First Liberty for bringing up the matter. He then wrote, “The rights of the citizens of Texas are better protected today because of all our efforts. This has been a civics lesson in how democratic government is supposed to work and it would not have happened without you.”

“I always believed in my heart there would be a change in the rules that would allow me to keep my sign, as well as other Texans wanting to express their religious views on their own property,” Mrs. Golden said. “As it states on my sign, ‘With God, all things are possible.’”

First Liberty Senior Counsel Michael Berry said, “We applaud TXDOT’s willingness to work with Mrs. Golden to make this a win-win situation. This rule change will benefit all Texans who value liberty. And we commend TXDOT’s commitment to religious freedom and private property rights, which are the most sacred rights Texans and Americans enjoy, dating back to the founding of Texas and our nation.”

HEMPHILL, TX SEPT. 18, 2014– Today, Liberty Institute on behalf of its client Jeanette Golden of Hemphill, TX, and Texas Department of Transportation (TXDOT) officials jointly announce that the Ten Commandments sign Golden placed on her property along State Highway 21 is exempt from a state regulation prohibiting non-commercial signs on private property.

Prior to the rule change, which became official today, non-commercial signs such as Golden’s were not permitted in Texas, even though commercial signs were allowed with a license and permit. In May 2014, Golden complained to TXDOT that the regulation violated the Constitution, federal and Texas law. In response, TXDOT agreed to amend the regulation by creating an exemption for non-commercial signs such as Golden’s. Under the new rule, signs that do not exceed 96 sq. ft. in size, sit on private property and do not promote a business are allowed without a license or permit. Golden’s Ten Commandment’s sign is 72 sq. ft. Follow this link to view a copy of TXDOT’s rule change letter: https://libertyinstitute.org/txdot#revisedpolicy

“I always believed in my heart there would be a change in the rules that would allow me to keep my sign, as well as other Texans wanting to express their religious views on their own property. As it states on my sign: “With God, all things are possible,” Golden said.

Liberty Institute Senior Counsel Mike Berry said, “We applaud TXDOT’s willingness to work with Mrs. Golden to make this a win-win situation. This rule change will benefit all Texans who value liberty. And we commend TXDOT’s commitment to religious freedom and private property rights, which are the most sacred rights Texans and Americans enjoy, dating back to the founding of Texas and our nation.”

Liberty Institute is a national nonprofit legal group dedicated to defending and restoring religious liberty across America — in our schools, for our churches, inside our military and throughout the public arena. Liberty’s vision is to reestablish religious liberty in accordance with the principles of our Founding Fathers. For information, visit www.LibertyInstitute.org. 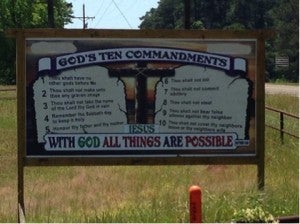 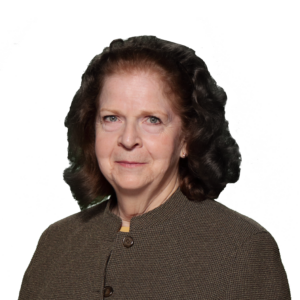