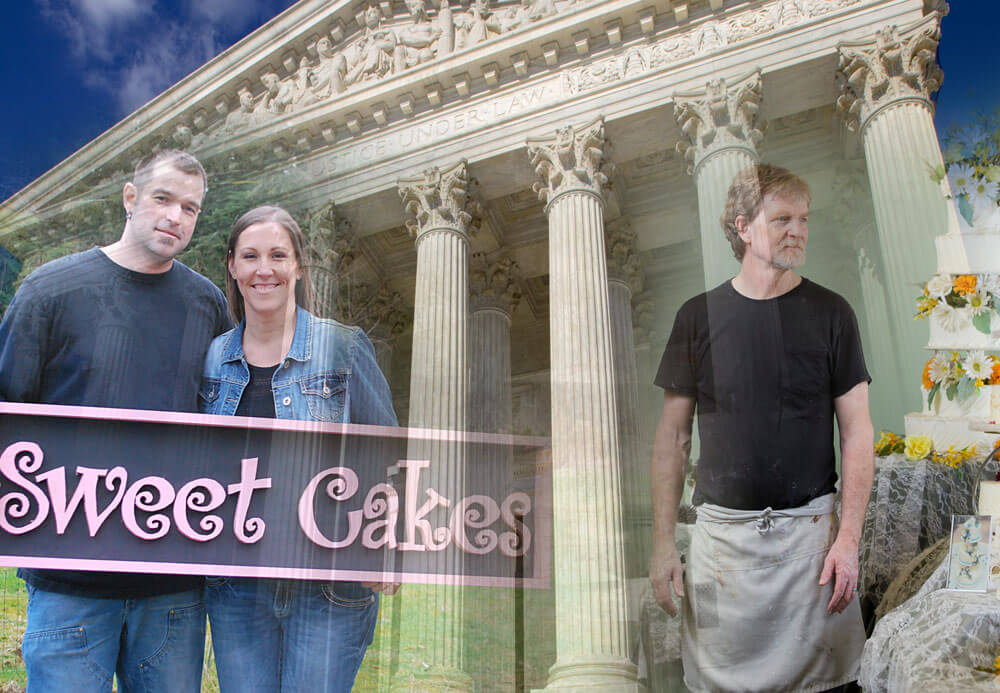 On September 7, 2017, attorneys with First Liberty Institute filed a friend-of-the-court brief with the Supreme Court of the United States on behalf of their clients, Aaron and Melissa Klein.

The amicus brief was filed in support of Jack Phillips, the petitioner in Masterpiece Cakeshop v. Colorado Civil Rights Commission, which is expected to be heard by the Supreme Court in the coming fall term.

Phillips is a Colorado baker and small-business owner who in 2012 informed a same-sex couple that he could not create a custom wedding cake for their ceremony because doing so would violate his religious beliefs as a Christian. Although Phillips emphasized that he would gladly bake other items for them, the couple later proceeded to file a formal charge of discrimination against Phillips.

After years of going through the appellate process, Masterpiece will soon be heard at the highest level. The Court of Appeals of Colorado ruled against Phillips, who appealed to the U.S. Supreme Court.

A DISPLAY OF SOLIDARITY

In 2007, the Kleins opened “Sweet Cakes by Melissa,” a bakeshop in Northwestern Oregon whose services included creating specialty cakes customized for each wedding. Six years later, the Kleins declined a request to create a custom cake for a same-sex wedding due to their deeply-held religious beliefs about marriage.

Subsequently, the Oregon Bureau of Labor and Industries (BOLI) imposed a crippling $135,000 penalty on the Kleins. The State of Oregon also issued a gag order which prevented the couple from freely expressing their religious beliefs and views on marriage in the future. Following harassment, threats, and a decline in business, along with the financial penalty, Aaron and Melissa were forced to close down their shop.

Attorneys for the Kleins presented oral argument before the Oregon Court of Appeals on March 2, 2017. A decision is pending.

As stated in First Liberty’s brief in support of Masterpiece filed with the Supreme Court:

“This Court’s decision in Masterpiece Cakeshop v. Colorado Civil Rights Commission will determine whether the government can force individuals like Aaron and Melissa to choose between practicing their livelihoods and violating their consciences. Because the First Amendment does not permit the government to force such a choice upon individuals like the Kleins, the judgment [of the Court of Appeals in Masterpiece] should be reversed.”

Through this most recent amicus brief, First Liberty Institute and the Kleins urged the Supreme Court to recognize the vital significance of the case to individuals across the nation who risk losing their livelihoods because of their religious beliefs. The case could set a longstanding precedent for the lower courts on matters of religious liberty and expression.

If the Supreme Court rules that Jack Phillips’s decision to refrain from creating a cake for a same-sex wedding is protected under the Free Speech and Free Exercise Clauses of the First Amendment, then the decision would favorably impact people across the country like the Kleins. The opposite scenario—a loss for Phillips—could make the path to justice more difficult for Aaron and Melissa.

There is much more at stake than whether or not Phillips and the Kleins can be forced to bake cakes for same-sex weddings. The core principle at stake is whether the government can compel individuals to communicate ideas with which they fundamentally disagree. Americans from all religious backgrounds could be affected by the rulings on these cases. It could mean that Americans will be forced to make decisions in their businesses and places of worship that violate their consciences or face legal action for standing firmly by their religious principles.

Concerning Masterpiece, First Liberty contends that “the First Amendment entitles Jack Phillips, like every other American, to refrain from supporting same-sex marriages.” Instead, Phillips maintains “the right not to be compelled by force of law to abandon his decent and honorable belief opposing same-sex marriage.”

In essence, Americans should not be forced to choose between forfeiting their profession or violating their religious conscience.

In a concurrent brief, the United States Department of Justice echoed First Liberty’s stance on the Masterpiece case:

“Forcing Phillips to create expression for and participate in a ceremony that violates his sincerely held religious beliefs invades his First Amendment rights…[and] Colorado has not offered, and could not reasonably offer, a sufficient justification for that compulsion here.”

Ultimately, the Supreme Court decision will shape the landscape of the religious freedom debate for decades to come. For generations, American citizens have enjoyed and cherished the liberty to worship and practice their faith without government intrusion. At a time when the government is attempting to coerce or interfere with that right, First Liberty is at the forefront, ready to fight for the religious liberty of all Americans.