In Times of Distress, America Prays 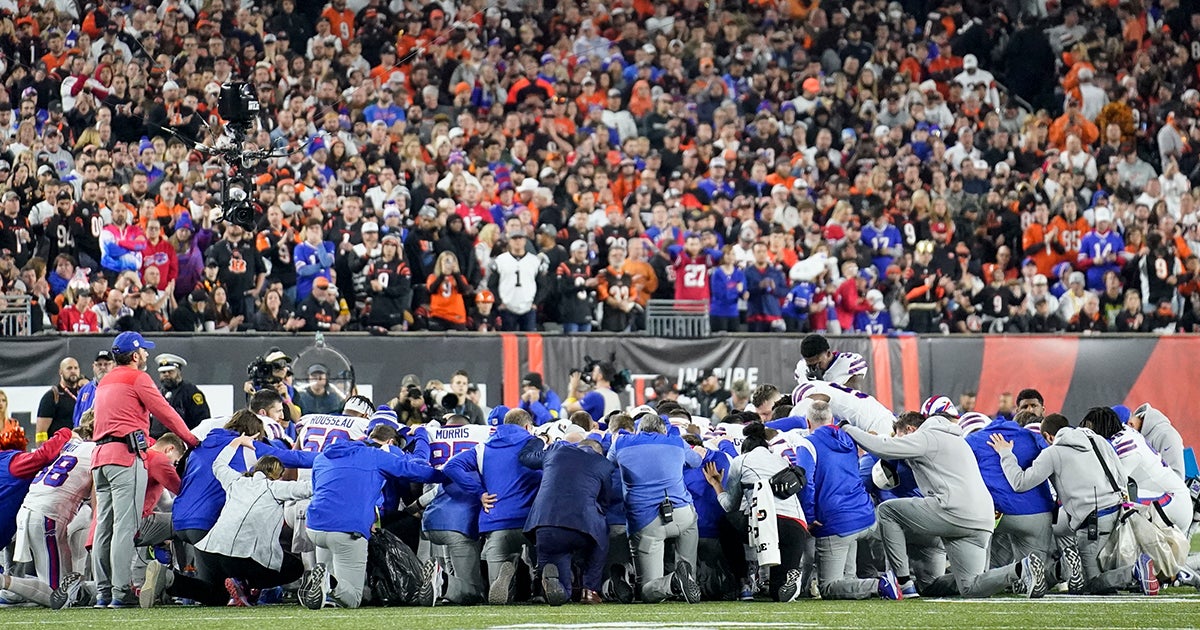 After Buffalo Bills Safety Damar Hamlin suffered cardiac arrest on the field, players and team staff quickly took a knee in a massive, yet intimate, circle on the field. Those watching the game that Monday night witnessed the team’s chaplain, Len Vanden Bos, leading the group in a moment of spontaneous prayer. The hushed crowd at Paycor Stadium burst into applause as the players knelt and again as they rose. It was a moment that was impossible to miss.

In the days that followed, we saw an incredible outpouring of support for Hamlin. A GoFundMe charity Hamlin set up received millions in donations, NFL players wore shirts displaying a “Love for Damar” imprint, and of course, speedy recovery messages came in from virtually every corner of the country.

As the young man fought for his life, we saw something profound. America responded by doing much more than simply saying “get well soon.” Millions around the country turned to God and prayed.

“Please pray for our brother,” Bills Quarterback Josh Allen wrote on Twitter. A video circulated online of Bengals fans reciting the Lord’s Prayer in the stands.

In a bold, public display of faith, former NFL quarterback and now ESPN host Dan Orlovsky paused in the middle of a live TV broadcast to pray:

What stood out about Orlovsky’s prayer was the widespread praise he received. And it wasn’t only evident on ESPN. The Wall Street Journal ran an opinion piece titled “How Damar Hamlin Drove a Nation to Pray.” The New York Times featured a surprisingly positive article on the bond between football and faith:

“To outsiders, the intensity of these expressions of faith might have seemed surprising, an unusual display of public devotion in an increasingly secular culture. To observers of the close relationship between Christianity and American football, the exhortations to prayer were natural.”

We often hear that our nation is increasingly secular. And in such a hostile culture, one would think public expressions of faith would be unwelcome, ridiculed or lambasted. But that hasn’t been the case in recent days. Why?

We think it has a lot to do with an attitudinal shift regarding religious expression our country. Last year, the U.S. Supreme Court ruled in Coach Kennedy’s case that he has a constitutional right to kneel in prayer on the field after games. The Court not only upheld his rights, but also overturned a 50-year-old precedent that harmed religious liberty. It set a new precedent that government cannot censor private religious expression.

This landmark case didn’t just bring a positive change to the law. It also had a big cultural impact. It sent a message across our country that prayer and religious expression should not be censored or hidden. It’s okay—and legal—to express our faith in public.

We see this shift becoming a reality with Damar Hamlin’s incident. People turned to their faith, and the positive response demonstrates that America is still a nation that values prayer and the free exercise of religion.

Prayer is what Americans are historically known to do. From our leaders to our local communities, many of us seek God’s divine intervention in times of deep distress.

December 1777 was one of the bleakest times during the Revolutionary War. The Continental Army had won few battles and morale was low. It was at this critical juncture when General George Washington took a knee in what’s known as the “Prayer at Valley Forge.” A man of faith, the Father of Our Country was known for going to God in prayer when he, his troops and our fledgling nation faced a crisis.

During the Civil War, one of America’s darkest and most divisive times, President Lincoln openly turned to prayer. His Second Inaugural Address delivered in 1865 read:

“Fondly do we hope, fervently do we pray, that this mighty scourge of war may speedily pass away. Yet if God wills that it continues… until every drop of blood drawn with the lash shall be paid by another drawn with the sword…so still it must be said that the judgments of the Lord are true and righteous altogether.”

Just before the D-Day invasion of Normandy in WWII, President Franklin D. Roosevelt delivered a radio address to the nation. His words on June 6, 1944 took on the form of a prayer:

“Almighty God: Our sons, pride of our Nation, this day have set upon a mighty endeavor, a struggle to preserve our Republic, our religion, and our civilization, and to set free a suffering humanity…Lead us to the saving of our country, and with our sister Nations into a world unity that will spell…a peace that will let all of men live in freedom, reaping the just rewards of their honest toil.”

Through our most troubling and difficult times, Americans ask God for guidance, favor and deliverance. This was true at the very inception of our country, and it is true today.

There’s supernatural power in prayer. Just a little more than a week after being hospitalized, Hamlin has shown remarkable progress. His recovery is nothing short of miraculous. Reports say that he is breathing on his own and physicians at the University of Cincinnati Medical Center have said his “neurological function is excellent.”

We are incredibly blessed to live in America, where we have religious freedom and a constitutionally protected right to pray publicly, openly and collectively. Let’s continue to pray together for Hamlin and his family, as well as for our country. It’s not hard to see the tremendous difference it makes when people turn to God in prayer.