Advent: A Countdown to Christmas or Something More? 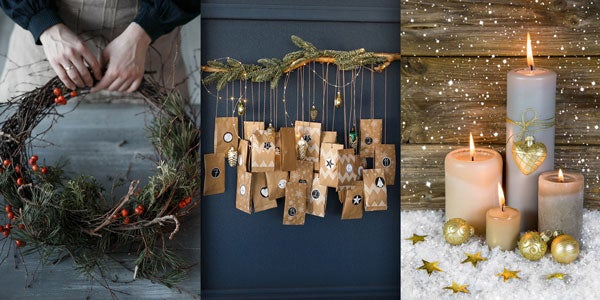 For you and millions of other Americans, December is blitz of holiday spectaculars – shopping, family, dinners, lights, and yes, those infamous, ugly Christmas sweaters.

But what you may not know is that December is also Spiritual Literacy Month, a time to expand our knowledge of the various religious traditions that exist in America. People of all faiths celebrate their holiday season in different ways – and that’s why First Liberty exists to defend and protect the right of all faiths to commemorate their special days in accordance with their beliefs.

That being said, let’s take a closer look at the Christian tradition of Advent.

For many, Advent brings memories of beautiful Christmas scenes or discovering a new confectionary treat each day of December before Christmas. But what actually is Advent? Is it a countdown to Christmas, or something more?

Today, Advent is often observed as a four-week period before Christmas, where observers pray, fast and celebrate in memory of Christ’s birth, resurrection and His promised second coming.

However, Advent has great variety of meaning and forms of practice, and the way that it is observed today also brings together a rich history of traditions from centuries past.

The first recorded celebration of Christmas occurred in 336 AD under the Emperor Constantine. Under Pope Julius I, December 25 was chosen as the official celebratory date, which was selected to coincide with Winter Solstice celebrations that were already occurring during that time.

Over the centuries, the formalized observation of Advent is not entirely clear, but it does date back to at least 567 AD when monks spent the month of December fasting.

Eventually, the organized church began adopting the heart of this practice in what is called Advent: remembrance of both Christ’s first coming two thousand years ago and the anticipation of His promised return.

Today, most observe Advent the four Sundays and weekdays directly preceding December 25th. For certain religious groups, like in Eastern Orthodox, Advent is longer, beginning November 15th. This is a 40-day journey leading to the Feast of the Nativity on December 25, which then lasts for 12 days. One interesting point about Advent is that Sundays are not seen as a time to fast, but rather to celebrate the resurrection of Christ.

In the 1800’s, Europeans were known to note the days of Advent with a candle or chalk mark on the wall, while some hung devotional images on the wall. These practices influenced the development of wooden calendars in the mid-19th century, and eventually led to a blossoming calendar countdown tradition that spread worldwide in the 20th century.

Other Christian traditions are marked by more strict liturgies, but Advent doesn’t have hard-fast, official rules. However, those who observe it generally do include prayer and fasting and consider it a period of self-preparation and in many occasions accompanied by with repentance and reconciliation before the arrival of Christmas.

One of the most visible impacts of Advent in our culture today is the displaying of wreaths. The Advent wreath is usually an evergreen wreath placed on a table or suspended from a ceiling or an arch, and it serves as a reminder to Christians of the eternal and ever-renewing promises of Christ.

One of the fondest Advent traditions for both congregations and families is the lighting of Advent candles. In centuries past, northern Europeans lit as many as twenty-four candles on an evergreen-covered wheel or wreath. By lighting a candle a day, they marked time, anticipating the return of the sun’s light and warmth. By the 1500s, both Lutherans and Catholics adapted the Advent Wreath as a devotional way to prepare for the coming of Christ.

Today, many Advent observers still light a candle for each day while others arrange four or five candles in a wreath display. The first, second and fourth weeks are represented by purple candles, the officially selected color of Advent. The third week’s candle may be rose, symbolic of the joy coming with Christ’s second coming celebrated that week. Some will include a fifth white candle in the center for Christmas day.

Songs, hymns and carols are also an important part of Advent. They are often sung during the candle lightings. Some of the most popular are: “O Come O Come Emmanuel,” “Come Thou Long Expected Jesus,” and “People, Look East.”

So, we see that Advent has been an important aspect of holiday celebration in years gone by and will likely continue shaping festivities in new ways in the years to come. Whether this Advent you will be bringing out grandma’s old custom-made calendar, quietly fasting, or forging your own traditions, we encourage you to continue to broaden your spiritual literacy and enjoy the season of remembrance and celebration!