PRAYER POLICE: What Every Person Who Shares Their Faith Should Know 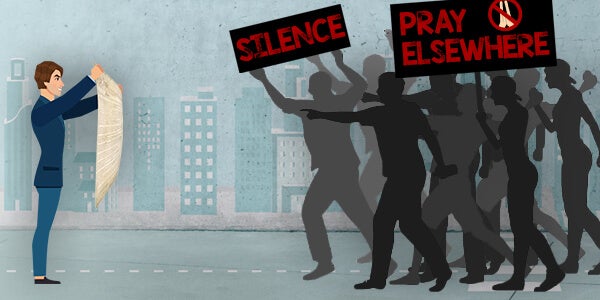 What Every Evangelist, Street Preacher, or Anyone Else Who Shares Their Faith Publicly Should Know to Protect Themselves

It’s no secret. In America today, hostility to religion – and religious expression – is at an all-time high.

The Prayer Police (all those who oppose free religious expression, such as radical atheist groups, embedded government bureaucrats, even landlords at senior living facilities!) are constantly prowling and taking every chance they get to censor or silence people of faith.

These group and individuals operate with a misguided agenda that derides religious speech, claiming in particular that religious expression has no place in the public sphere.

And because of their distorted agenda (along with their lack of knowledge about the U.S. Constitution), evangelists and street preachers are now finding themselves in the crosshairs of bullying tactics and arduous lawsuits.

But evangelists – and any other person of faith who speaks publicly – must know that the law – and First Liberty – is on their side.

Here is our response to three common questions regarding public religious expression:

Can I preach, evangelize, or share my faith in public places?

Generally speaking, yes you can express your religious beliefs – including evangelism – in public spaces.

It is beyond dispute that the U.S. Constitution protects your right to express your religious views in public. What’s more, for the street preacher, oral speech is specifically shielded by the First Amendment. And that is an invaluable protection when we consider that most of the time evangelists share their faith by word of mouth.

But religious speech protections are not just limited to the U.S. Constitution. Often, state constitutions also contain language that closely resembles that of the First Amendment, which reinforces your right to express your religious views. In fact, these state protections help ensure that government officials may be held personally liable if they violate a citizen’s constitutional right to religious expression.

In sum, evangelists who speak in public spaces – such as parks, sidewalks, or public streets – have the strongest guarantee of constitutional protection.

Have you been censored or silenced when sharing your religious beliefs?
Contact our expert legal team today!

I’m being asked to apply for a “speech permit.” What should I do?

Some local governments consider individual religious expression a “demonstration” and may require you to apply for a “speech permit.”

You can usually find speech permit requirements in your local ordinances. Cities and counties often have requirements for sound amplification, signs, or handing out leaflets – which are generally reasonable requests.

But you must take “speech permit” requirements with a grain of salt.

Courts have unanimously held that speech permit requirements impose a heavy burden on individuals and small groups. And that means “speech permits” for citizens are generally only allowed under very limited circumstances.

In other words, the Constitution is on your side when it comes to speech permits.

If you – or a small group from your church or house of worship – are going to hold a public event, it’s likely you will run into some kind of permit requirement. We recommend contacting our attorneys immediately if you think that these permits or city officials are impeding your right to religious speech.

Are there places or situations in which I cannot share my faith publicly?

Americans enjoy expansive rights when it comes to religious expression. Nonetheless, there are a few scenarios in which your free speech rights may be limited.

For one, government has some ability to restrict your speech, but only under very narrow circumstances. For example, governments can restrict demonstrations that block traffic or pedestrians entrance to a building, as well as any unnecessary loitering outside of buildings.

Other forms of unprotected speech include obscenity, defamation, promoting lawless behavior, fraudulent misrepresentations. Fighting words and intimidating behavior may not be protected under law.

Broadly speaking, street preachers need to be careful and prudent. Preaching or sharing your religious beliefs on private property could be a gray area – which usually means you should obtain permission from the owner before engaging in religious speech in or around private property.