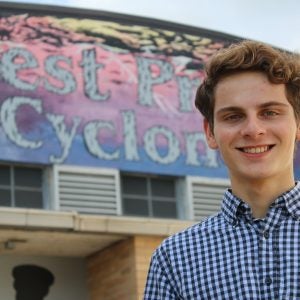 Sam Blackledge was co-valedictorian of the 2018 graduating class of West Prairie High School in Illinois. Sam worked for weeks on his valedictory address, but just hours before the graduation ceremony school officials forced him to either delete the comments about his religion or not give the speech at all. First Liberty Institute represented Sam and worked to ensure his religious liberty and the rights of all students are respected now and in the future. In December of 2018, the school board updated its policies to ensure that the religious liberty of students is protected.

Sam Blackledge was co-valedictorian of the 2018 graduating class of West Prairie High School in Illinois. Sam worked for weeks on his valedictory address, but just hours before the graduation ceremony school officials forced him to either delete the comments about his religion or not give the speech at all. First Liberty Institute represents Sam and is working to insure his religious liberty and the rights of all students are respected now and in the future.

First Liberty learned of the situation surrounding Sam Blackledge’s graduation speech and immediately began investigating the details. “School officials should remember that students retain their constitutional rights to freedom of expression from the schoolhouse gates, all the way through the graduation ceremony,” says Jeremy Dys, Deputy General Counsel for First Liberty.

The practice of school district officials editing, controlling, and censoring student speech because of its religious viewpoint is unconstitutional. First Liberty will continue to work with Sam and the school district to implement the necessary protections for students’ religious liberty.

Sam Blackledge worked hard to become the valedictorian of his graduating class. He achieved a perfect 4.0 grade point average. Sam attributes his accomplishments to more than just hard work. “The most important thing in my life is Christ,” he said. “Christ is the only reason I was a valedictorian. He’s the reason I got that 4.0. If it wasn’t for him I wouldn’t be up there. I was giving Him the credit for that.”

But administrators at West Prairie High School in Illinois refused to let him mention his faith because according to them the content was not appropriate for a high school graduation ceremony. Just minutes before the graduation ceremony was scheduled to begin, school officials gave Sam an incredibly difficult choice to make.

“They said they didn’t want to make it a religious ceremony. They told me that if I took out Christ I could say everything else.”

When school officials explained their concerns over the possibility that some in the audience might think Sam was speaking on behalf of the school district, Sam attempted to compromise and proposed a solution.

“I offered to begin my speech with a disclaimer but they turned that down, too – twice,” he said.

Where students or other private graduation speakers are selected on the basis of genuinely neutral, evenhanded criteria and retain primary control over the content of their expression, however, that expression is not attributable to the school and therefore may not be restricted because of its religious (or anti-religious) content. To avoid any mistaken perception that a school endorses student or other private speech that is not in fact attributable to the school, school officials may make appropriate, neutral disclaimers to clarify that such speech (whether religious or nonreligious) is the speaker’s and not the school’s.

In December of 2018, after working with First Liberty attorneys, the school board updated its policies to ensure that the religious liberty of students is protected.

Colchester, Illinois—First Liberty Institute today announced that the West Prairie (IL) Community School District 103 adopted policies protecting the First Amendment rights of students who participate in graduation ceremonies.  In May, a student, Sam Blackledge, had to alter his valedictory speech and was prohibited from sharing his faith in the way he had planned.  The new policies were approved last night by the West Prairie School Board.

“West Prarie’s new policies ensure that students are free to express their faith at school as long as it’s not disruptive,” said Roger Byron, Senior Counsel for First Liberty Institute. “We, along with our client, are very pleased that West Prarie school officials clarified this important policy that will permit future students to share their faith in a graduation ceremony.  We appreciate the school district’s deep commitment to upholding the Constitution.”

In May, Blackledge, a 2018 graduate of West Prairie High School, was told prior to his graduation that he could not share his faith in his valedictory speech in the way he had planned.  In a letter to school officials, First Liberty explained that the First Amendment protects the personal remarks of graduates.  School officials worked with the attorneys at First Liberty Institute to craft a clarification to their policies in order to protect the religious expression of students in the future.