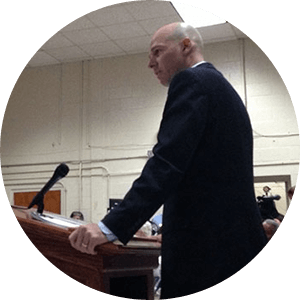 In early 2013, the organization Americans United for Separation of Church and State (AUSCS) began complaining to school officials in Bulloch County, Georgia, about perceptions of excessive religious expression by teachers and other staff members. The organization’s complaint resulted in an atmosphere of fear and religious censorship at the county’s schools. First Liberty Institute took action to protect the religious freedom of teachers, staff, and students in the district. As a result, the school board issued a notice supporting the religious liberty of teachers and staff, and school officials overturned rules that unlawfully discriminated against a student-led Bible study at an area high school.

Bulloch County schools made national headlines when a prominent journalist posted an article that cited criticism of the district for taking down a public bulletin board where teachers traditionally displayed Christmas cards.

First Liberty Senior Counsel Jeremy Dys made the trip to Bulloch County and uncovered multiple instances of religious hostility. For example, teachers and staff were ordered to walk away from student-led prayer, teachers were told to remove Bible verses or religious sayings from computer screen savers and email signatures, and a student-led Bible study at an area high school was abruptly prohibited access to a bulletin board that had previously been open to them.

Dys learned the censorship of religious expression at the county’s schools had worsened after a complaint from AUSCS.

Dys attended the next school board meeting and spoke to the board and an emotionally charged crowd. Most members of the crowd were there to support the teachers and staff.

A week later, the Bulloch County Board of Education favorably responded by issuing a notice supporting the religious liberty of its teachers and staff, though the district continued to ban religious expression in the email signatures of employees.

First Liberty also successfully represented the leadership of the student-led Bible study at an area high school that was prohibited from using a bulletin board previously open to them. School officials reversed rules that banned the group from holding weekly meetings, posting Scripture verses on the bulletin board, and using the school’s name on t-shirts for their group.

America’s schools have become targets for secularist groups like the AUSCS, the Freedom From Religion Foundation (FFRF), and the American Civil Liberties Union (ACLU). These organizations send out hundreds of letters each year that mislead school officials and threaten them with lawsuits. Fearful of expensive litigation, many schools make decisions and enact policies that infringe upon the religious liberty of teachers, staff, and students. But with expert legal counsel and citizens who are willing to stand up for their rights, religious freedom can be defended and restored.

First Liberty is committed to defending teachers, school staff, and students across the country who face the violation of their religious freedom rights. First Liberty works to prevent school districts from making hasty decisions out of fear of lawsuits from secularist groups, and First Liberty seeks to educate school districts on the strong legal protections for religious liberty in the school and empower school officials to make decisions that protect the First Amendment rights of teachers, staff, and students.