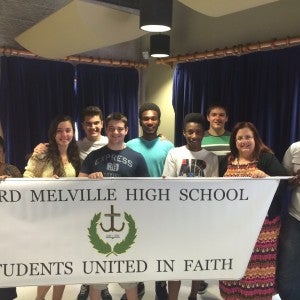 In the fall of 2013, Ward Melville High School in East Setauket, New York refused to recognize John Raney’s Christian “Students United in Faith” (SUIF) club because it was a religious club. First Liberty sent a demand letter, and the school reversed its position and agreed to allow the club. But in the fall of 2014, the high school denied the club formal recognition again. First Liberty sent another demand letter, and the school district again reversed its decision and agreed to formally recognize SUIF.

Students United in Faith (SUIF) is a faith-based, service-oriented club that has held successful food drives and made a positive impact in a community fighting increasing drug use and suicide among teens. However, when John Raney, a student at Ward Melville High School in East Setauket, New York, applied to start the club, he ran into opposition from school officials.

In the fall of 2013, John submitted a request to his high school for permission to start SUIF. However, after ignoring his application for more than two months, the school denied his request, saying that religious clubs were illegal in New York public schools, even though the school permitted other student clubs like the Fishing Club, the Frisbee Club, and even the Rube Goldberg Club. John contacted First Liberty.

John called First Liberty again. First Liberty Senior Counsel Jeremy Dys advised John of his constitutional rights of free speech and association. Dys informed John that the club could legally walk in the parade with the religious liberties group, so John and his fellow club members did just that.

Despite their previous decision to allow SUIF formal recognition, Ward Melville High School denied the club’s request to continue on campus for the fall of 2014.

In September 2014, John asked the school’s new assistant principal, Dr. Christian Losee, how to re-apply for school recognition for the 2014-2015 school year. Dr. Losee told John to submit an application by September 9, 2014, and John submitted the application on the day of the deadline. But by the next day, the school rejected in writing SUIF’s application and claimed the rejection was due to “[c]ontractual guidelines regarding minimum student participation in co-curricular activities” and “Ward Melville High School’s financial limitations.”

In a demand letter dated October 6, 2014, First Liberty and volunteer attorney Todd Harrison, a partner at McDermott Will & Emery, challenged the school’s rejection of the club, stating:

It seems obvious that the School’s stated reasons for rejection of John’s application are once again simply pretext—we are not aware of any other similarly situated clubs that have received such denials. Thus, it is clear that SUIF’s application was rejected due to religious discrimination and retaliation.

“This is not a complicated issue,” Hiram Sasser, First Liberty Deputy Chief Counsel, said at the time. “Simply put, public schools cannot discriminate against religious clubs and must treat them the same as other student clubs on campus.”

“The decision to reject SUIF’s request to continue as a club on campus is in clear and direct violation of the Equal Access Act of 1984, Supreme Court precedent, and the First Amendment of the United States Constitution,” said Harrison, who served as lead attorney for the students.“There is simply no legal basis for the School’s decision in this case.”

In a letter dated October 9, 2014, just a few days after First Liberty sent its letter, a lawyer representing the school responded that the school had changed its position and would recognize SUIF as a student club.

“We are hoping that the school doesn’t make this an annual tradition of violating the Equal Access Act,” Sasser commented. “Congress can pass laws and the courts can issue opinions, but if great Americans like John Raney and Jeremy Johnson don’t take a bold stand for freedom, we will all lose our liberty.”

“I am very happy that the decision has been reversed,” John said. “The publicity surrounding my school’s decision to deny our club access to campus has had the happy consequence of helping students hear about our club who otherwise would not have heard and they have begun to support the club in even greater numbers. I am thrilled that my fellow club members and I can resume doing good for our community.”

“Today, Ward Melville High School did the right thing by affirming that students of faith in American public schools have the same freedom to form a club as any other student,” said Liberty Institute attorney Jeremy Dys. “We are pleased that our clients will begin their student club immediately after returning from Christmas break.”

Liberty Institute’s client applied to form a Christian club at Ward Melville High School, but school administrators simply ignored his application for over two months. Only when the student’s mother asked the principal what happened to her son’s application did the student learn why his club had been denied: religious clubs, according to school administrators, are illegal in New York public schools.

After the first of the year, Students United in Faith will join over 40 other student clubs at Ward Melville High School.

Liberty Institute is a national nonprofit legal group dedicated to defending and restoring religious liberty across America — in our schools, for our churches, in the military and throughout the public arena. Liberty’s vision is to reestablish religious liberty in accordance with the principles of our nation’s Founders. For information, visit www.LibertyInstitute.org.