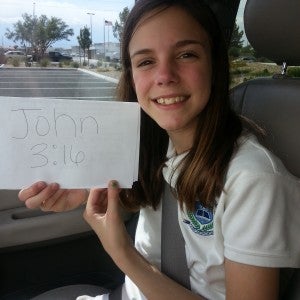 School officials apologize for denying sixth-grader's right to use John 3:16 in class assignment

Mackenzie Fraiser, a sixth-grader at Somerset Academy, a public charter school in Las Vegas, Nevada, was told that she could not include a Bible verse in a class assignment titled “All About Me.” First Liberty sent a demand letter to school officials informing them that the law protects the expression of faith by students in class assignments. Two days later, the school responded with a formal apology and allowed Mackenzie to resubmit her assignment including her expression of faith.

In February 2015, sixth-grader Mackenzie and the rest of the students in her class at Somerset Academy, a public charter school in Las Vegas, Nevada, were assigned a project to compose PowerPoint presentations called “All About Me.” The presentation was to include a slide with an “inspirational saying” important to the student’s identity. Mackenzie’s Christian faith is a central aspect of her identity, so she planned to use a Bible verse—John 3:16—as her “inspirational saying.” However, the teacher told the class they could not use “Bible verses or quotations from the Book of Mormon” on the “inspirational sayings” slide, so Mackenzie settled for a trite saying that was entirely secular and submitted her assignment.

Soon after, Mackenzie was assigned a project on self-esteem in another class. When Mackenzie’s stepmother suggested she reference how her self esteem derives from being made in the image of God, Mackenzie became nervous and told her parents about how the use of Bible verses had been banned in the “All About Me” presentation. This had led Mackenzie to believe it was wrong, even illegal, to express her faith in school assignments.

Mackenzie’s father, a pastor, emailed school officials to find out why his daughter had not been allowed to include a Bible verse in her assignment. Somerset Academy’s Assistant Principal replied—incorrectly—that the school was following U.S. Department of Education Guidelines, claiming that the Bible verse could not have been included because the “All About Me” project was intended to be presented to the class.

On May 20, 2015, First Liberty sent a demand letter to school officials. The letter cited three reasons for why the school should have allowed Mackenzie to include the Bible verse in her project: First, the U.S. Constitution protects the religious expression of students. Second, U.S. Department of Education guidelines do protect the rights of students to express their faith in class assignments—and these rights do not end when an assignment is to be presented in class. Third, censoring students’ religious expression teaches students that it is wrong to express faith at school and, like what happened in Mackenzie’s case, can make students afraid to express their religious beliefs.

Mackenzie’s story received national attention when FOX News contributor Todd Starnes reported on the case in his “American Dispatch” column. It was also covered by other national media outlets including the Associated Press, Breitbart, The Blaze, and Fox & Friends.

On May 22, 2015, two days after First Liberty sent the demand letter, the school responded by issuing a formal, written apology to Mackenzie. The school agreed to allow Mackenzie to resubmit her original project, including her favorite Bible verse, John 3:16.

The apology letter from Somerset Academy states: “After reviewing the facts of this particular situation, Somerset Academy recognizes that the teacher and assistant principal incorrectly implemented [Department of Education] guidelines….Somerset Academy of Las Vegas and its Administrators apologize for this inadvertent error. The student will be allowed to resubmit her original presentation, inclusive of her religious beliefs.” (Read the apology letter.)

“We are thankful that Somerset Academy school officials did the right thing by upholding Mackenzie’s right to express her religious beliefs in class assignments,” said Jeremy Dys, First Liberty Senior Counsel. “As the school officials correctly noted, U.S. Department of Education guidelines guarantee that students are free to express their religious beliefs in their schoolwork. We are grateful for the Academy’s quick response and commitment to safeguarding their students’ freedom of religious expression at school.”

SCHOOL OFFICIALS TELL SIXTH GRADER SHE MAY NOT USE JOHN 3:16 IN CLASS ASSIGNMENT

Jeremy Dys, Liberty Institute Senior Counsel, said, “Students have a constitutional right to express their beliefs in class assignments. They should never be intimidated into feeling like their faith is bad or something they have to hide. Somerset Academy has denied Mackenzie’s constitutional and civil rights, ignoring U.S. Department of Education guidelines. We ask them to apologize and reaffirm their students’ rights to express their faith in school assignments.”

In February 2015, Somerset Academy sixth-grader Mackenzie Fraiser’s schoolteacher assigned her class a PowerPoint presentation called “All About Me.” In the presentation, Mackenzie was instructed to include a slide with an “inspirational saying” that was important to her identity. Though she planned to include her favorite Bible verse—John 3:16—Mackenzie’s teacher emphatically told her and the other students they were not allowed to put “Bible verses or quotations from the Book of Mormon” on the “inspirational sayings” slide.

Later in May, a teacher gave Mackenzie a new assignment on self-esteem. When her stepmother suggested she include a Bible verse in the project, Mackenzie got nervous and informed her parents that one of her teachers had made it clear that using Bible verses in class assignments was wrong. Mackenzie’s father, a pastor, emailed her teacher to ask why Mackenzie had been denied the right to include the Bible verse in her assignment. The Assistant Principal responded, incorrectly, that they were simply following U.S. Department of Education guidelines. However, as Liberty Institute attorneys pointed out, U.S. Department of Education Guidelines explicitly permit students to use Bible verses in class assignments: “Students may express their beliefs about religion in homework, artwork, and other written and oral assignments free from discrimination based on the religious content of their submissions.” (Read the guidelines here.)

Liberty Institute is the largest nonprofit legal organization in the nation dedicated solely to defending religious liberty in America. Liberty Institute protects freedom of religious expression in our military, schools, churches, and throughout the public arena. For more information, visit www.LibertyInstitute.org. -3