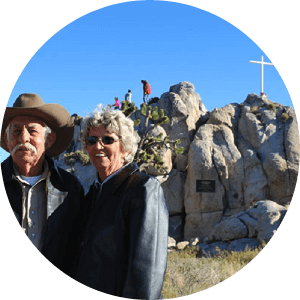 In 1934, the Veterans of Foreign Wars (VFW) erected the Mojave Desert Veterans Memorial Cross atop Sunrise Rock in the middle of the 1.6 million-acre Mojave National Preserve in California in honor of World War I veterans. But in 2001, the lawsuit of one individual living out of state, represented by the American Civil Liberties Union (ACLU), sparked a national controversy that compromised the fate of this veterans memorial and other memorials across the country that contain religious imagery. In 2010, in a landmark 5-4 decision citing First Liberty Institute’s brief 12 times, the U.S Supreme Court upheld the constitutionality of the land transfer of the veterans memorial to First Liberty Institute’s client, the VFW.

Henry Sandoz was a friend of Riley Bembry—a World War I veteran and one of the founders of the memorial. Riley Bembry took care of the cross until his death in 1984. Shortly before his passing, he asked Henry to care for the memorial. From that time, Henry and his wife, Wanda, faithfully looked after the cross.

Henry’s decision to take a stand led to the legal battle over the memorial cross that eventually climaxed in a battle at the U.S. Supreme Court.

“I thank God he’s a stubborn guy, because otherwise it would have been over and done, and there’d be no World War I memorial,” Wanda later said, as reported by WORLD News, when remembering Henry’s refusal to take down the cross.

In 2001, the ACLU filed a lawsuit on behalf of a man living in Oregon, arguing that the cross was unconstitutional since it was located on government land. Lower federal courts agreed, ordering the removal of the cross and prohibiting Congress from transferring the cross and the land on which it stood to the VFW.

Judges ordered a heavy bag padlocked over the cross to cover it up during the appeals process. Later, the bag was replaced by a wooden box.

To help save the memorial, First Liberty Institute stepped in and filed an amicus (friend of the court) brief at the U.S. Supreme Court on behalf of the VFW, The American Legion, Military Order of the Purple Heart and American Ex-Prisoners of War.

In 2010, the Supreme Court reversed the lower courts’ rulings and upheld the constitutionality of a law passed by Congress in 2003 that allowed the transfer of the memorial and the land upon which it stood to the VFW in exchange for land elsewhere in Mojave Desert owned by Henry Sandoz. In its decision, the Supreme Court referenced First Liberty’s amicus brief 12 separate times.

Just days after the Supreme Court’s ruling, vandals stole the cross, but the VFW promised that the memorial would be rebuilt once the case was finally over and the VFW became the official landowners of the small patch of desert where the cross once stood.

In April 2012, U.S. District Court Judge Robert J. Timlin signed an order ending the ACLU’s lawsuit, paving the way for the transfer of the original memorial site on Sunrise Rock to the VFW.

On November 11, 2012, after the conclusion of the land transfer, more than 200 supporters turned out for a special Veterans Day celebration, which included the long-awaited restoration and rededication of the new Mojave Desert Veterans Memorial Cross. At the ceremony, the Sandozes, members of the VFW, and members of The American Legion took turns reflecting on the historic moment – a moment 11 years in the making.

The protection of the Mojave Desert Veterans Memorial Cross, sparked by Henry Sandoz’s refusal to take down the cross, created important precedent for defending other memorials that contain religious imagery from being torn down.

In 2015, Henry passed away at the age of 76. Hiram Sasser, Deputy Chief Counsel at First Liberty, said, “If Henry Sandoz had caved in, the only World War I Memorial designated a National Monument by Congress would have come down, and the ACLU’s campaign to single out and take down veterans memorials with religious imagery would have claimed its most prominent victim.”

When a government official ordered King Aerospace to remove all signs that include the word “God” from an aircraft maintenance facility on an Air Force base, First Liberty Institute stepped in to help.