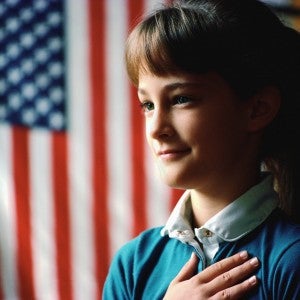 "Under God" in New Jersey Pledge of Allegiance protected against lawsuit

Humanist Association Challenges “Under God” Wording in Pledge of Allegiance

In March 2014, the American Humanist Association (AHA), along with an anonymous atheist couple and their child, sued the Matawan-Aberdeen Regional School District in New Jersey for conducting the daily, voluntary recitation of the Pledge of Allegiance in its schools in accordance with New Jersey law.

AHA’s lawsuit, filed in the Superior Court of New Jersey, Monmouth County, sought to have the pledge’s inclusion of the phrase “under God” declared a violation of the New Jersey Constitution’s equal protection guarantees. AHA filed the lawsuit even though the recitation of the pledge or any portion of it was completely voluntary and the United States Supreme Court has repeatedly described the “under God” wording in the Pledge of Allegiance as constitutional under the Establishment Clause of the First Amendment in the U.S. Constitution.

For example, in 1984, the Supreme Court observed that “the language ‘One nation under God,’ as part of the Pledge of Allegiance to the American flag…recited by thousands of public school children—and adults—every year” is a “reference to our religious heritage” in the same vein as “official references to the value and invocation of Divine guidance in deliberations and pronouncements of the Founding Fathers.” The Supreme Court also described the “under God” wording in the pledge as constitutional practice in its May 2014 ruling in Town of Greece v. Galloway, in which it upheld a town council’s right to pray before council meetings.

The AHA’s lawsuit challenging the pledge under the New Jersey Constitution was not the first time AHA had sued in state court to have the “under God” declared unconstitutional. The AHA along with atheist parents and their school children had previously sued a Massachusetts school district in a similar lawsuit. First Liberty, along with another team of premier volunteer attorneys, took action in August 2013 on behalf of The American Legion to defend the Pledge of Allegiance in Massachusetts and filed an amicus brief in support of the traditional pledge. Following the U.S. Supreme Court’s lead the Massachusetts Supreme Court upheld the pledge.

The Legion, chartered by Congress in 1919, is the largest wartime veterans service organization in the nation with approximately 2.2 million members. It works to instill patriotism and respect for America’s flag.

The Legion was instrumental in crafting the current language of the Pledge of Allegiance. In 1923, The Legion convened the very first National Flag Conference, attended by President Harding, as well as the second National Flag Conference the following year. At these conferences, the words of the pledge were changed from “I pledge allegiance to my Flag” to “I pledge allegiance to the Flag of the United States of America.” In 1942, The Legion led the way in convincing Congress to adopt into law the Flag Code that included the Pledge of Allegiance. Similarly, in 1954, The Legion worked to ensure that the words “under God” were added to the Pledge.

In September 2014, the Superior Court of New Jersey, Monmouth County, permitted The American Legion to become a party in the case to defend the pledge.

In February 2015, Judge David Bauman upheld the constitutionality of the pledge and granted First Liberty’s motion on behalf of The American Legion to dismiss the humanists’ lawsuit.

In his opinion, Judge Bauman discussed the long history of both America and the state of New Jersey of acknowledging and relying upon God as the one who secures liberty. After citing examples such as the Preamble to the New Jersey Constitution and Benjamin Franklin’s appeal to prayer during the Philadelphia Constitutional Convention, Judge Bauman wrote:

The Pledge of Allegiance, in this historical context, is not to be viewed, and has never been viewed, as a religious exercise. It is intended, rather, as a vehicle to transmit, ‘unimpaired to succeeding generations’ [from the New Jersey Constitution’s Preamble] of American public school boys and girls, those core values of duty, honor, pride and fidelity to country on which the social contract between the United States and its citizens is ultimately based. To that end, the Pledge Statute undeniably advances a compelling state interest.

Moreover, the words ‘under God’ are now as interwoven through the fabric of the Pledge of Allegiance as the threads of red, white and blue into the fabric of the flag to which the Pledge is recited. As a matter of historical tradition, the words ‘under God’ can no more be expunged from the national consciousness than the word ‘In God We Trust’ from every coin in the land, than the words ‘so help me God’ from every presidential oath since 1789, or than the prayer that has opened every congressional session of legislative business since 1787.

“We applaud today’s outcome that allows the school and the Court to avoid wasting more time and resources on a meritless lawsuit,” Roger Byron, First Liberty Senior Counsel, stated at the time. “This past May [in Town of Greece v. Galloway], the U.S. Supreme Court yet again used the Pledge of Allegiance as an example of a clearly lawful practice.”

“We are pleased the Court granted our client The American Legion’s motion to dismiss the case,” said Jeff Mateer, First Liberty General Counsel. “The unmerited assault on the Pledge of Allegiance and the rights of New Jersey school children to honor God and country is unfortunate and we are thankful that the law has once again been upheld.”

MATAWAN, NJ, July 31, 2014 – Today, The American Legion, The American Legion Department of New Jersey and The American Legion Matawan Post 176 filed a motion with the Monmouth County Superior Court of New Jersey to intervene in a lawsuit that challenges the constitutionality of the Pledge of Allegiance under the New Jersey Constitution. The motion to intervene asks the Court to permit the Legion to become a party in American Humanist Association et al. v. Matawan-Aberdeen Regional School District et al. to defend the Pledge it has supported and promoted for almost 100 years. The Legion also filed with the Court a motion to dismiss, asserting that the lawsuit has no merit and should be thrown out of court.

Fishkin Lucks LLP and Liberty Institute are two of the law firms leading the Legion’s representation in this matter.

“I am surprised and saddened that there are some who are saying the Pledge of Allegiance may be good enough for the U.S. Supreme Court and the rest of the nation, but it is not good enough for the citizens of New Jersey,” said Jeff Mateer, Liberty Institute General Counsel.

The American Legion, the largest wartime veterans service organization in the nation with approximately 2.3 million members, has a long-standing interest in the Pledge. The Legion convened the very first National Flag Conference in 1923 as well as the second National Flag Conference in 1924, which amended the Pledge to read “the Flag of the United States of America.” The Legion was also active in securing enactment of the Act of June 14, 1954, which added the words “under God” to the Pledge.

“It is unfortunate that the school and the court must waste precious time and resources on an obviously meritless lawsuit,” said Roger Byron, Liberty Institute Senior Counsel. “In May, the U.S. Supreme Court yet again used the Pledge of Allegiance as an example of a clearly lawful practice.”

The lawsuit began on March 31 when a humanist group filed a complaint alleging that the voluntary recitation of the Pledge in New Jersey schools violates the New Jersey Constitution’s equal protection guarantees because the Pledge includes the words “under God.”

In 1984, The United States Supreme Court observed that “the language ‘One nation under God,’ as part of the Pledge of Allegiance to the American flag … recited by thousands of public school children—and adults—every year” is a “reference to our religious heritage” in the same vein as “official references to the value and invocation of Divine guidance in deliberations and pronouncements of the Founding Fathers.”

Fishkin Lucks is a litigation boutique located in New York City and Newark, NJ, that delivers unparalleled litigation and risk management services in a client-centric, result-oriented manner that stresses efficient, cost-effective solutions. The Firm offers “big law” expertise and talent in in matters ranging from significant “one-off” litigations to large inventories of cases around the country. The Firm is also committed to handling significant pro bono matters involving issues of national interest.