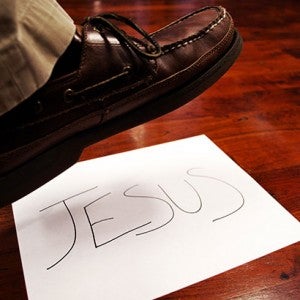 First Liberty Institute declared victory on March 25, 2013 on behalf of client Ryan Rotela, a college student who was suspended from Florida Atlantic University (FAU) after refusing to participate in a “lesson,” in which his instructor ordered the class to write the name “Jesus” on a piece of paper and step on it.

In March 2013, Professor Deandre Poole of Florida Atlantic University (FAU) instructed students in his Intercultural Communications course to write “Jesus” on a piece of paper, put the paper on the floor and step on it.

FAU Junior Ryan Rotela, a devout Mormon, had religious objections to stomping on Jesus’ name. Refusing to comply, Rotela explained to his professor why the assignment offended him.

Later, FAU responded to Rotela’s complaints by suspending Rotela from the class.

First Liberty Institute represented Rotela and immediately sent a letter to university officials defending Rotela, and requesting a meeting in person to resolve the situation.

In the meeting, the officials apologized in person, agreed not to take any further disciplinary action and to expunge all academic charges from Rotela’s student records, and to allow him to complete the course.

The next day, FAU’s Senior Vice President of Student Affairs issued a video statement, in which he said that particular lesson would no longer be used and that “it was insensitive and deeply hurtful.”

Florida Governor Rick Scott also sent a letter to Chancellor Frank Brogan of the State University System of Florida, requesting “a report of the incident, how it was handled and a statement of the university’s policies to ensure this type of ‘lesson’ will not occur again.”