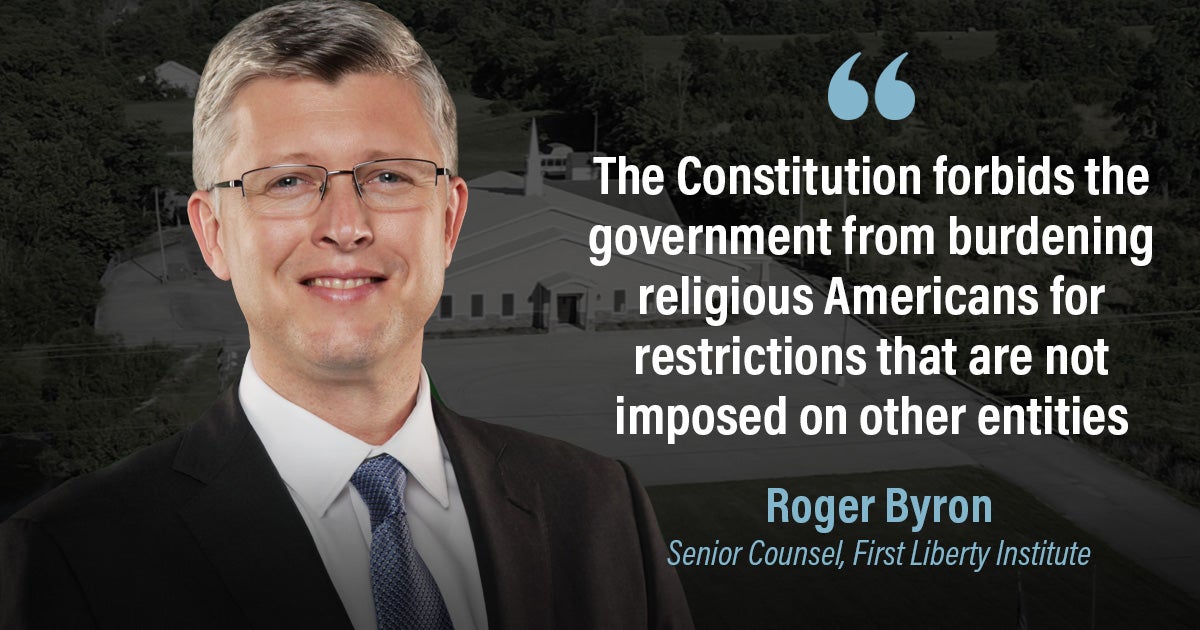 Nicholasville, KY—First Liberty Institute and network attorneys with WilmerHale and Bilby Law PLLC today filed a federal lawsuit and a motion for a temporary restraining order in the U.S. District Court for the Eastern District of Kentucky on behalf of Tabernacle Baptist Church of Nicholasville, Kentucky, challenging Governor Andy Beshear’s orders that prohibit in-person church services and threaten criminal penalties.

“Governor Beshear’s orders unlawfully target religious worship and violate the First Amendment,” said Roger Byron, Senior Counsel for First Liberty Institute. “The Constitution forbids the government from burdening churches with restrictions that are not imposed on other entities. The fundamental rights of religious Americans who seek to abide by the public health guidelines during this pandemic may not be singled out for onerous restrictions.”

Churches like Tabernacle Baptist stopped holding in-person religious services after a March 19, 2020 order by Kentucky’s Cabinet for Health and Family Services, a branch of Governor Beshear’s administration, that prohibited church gatherings on threat of criminal penalty. On March 25, Governor Beshear issued Executive Order 2020-257, and asserted religious organizations are not “life-sustaining” organizations, except when they function as charities by providing “food, shelter, and social services.” But while restricting churches the Governor permits people to congregate indoors in large numbers in a variety of other contexts, from shopping malls, to retail stores, to laundromats, to liquor stores, so long as they do so consistent with social distancing practices.

In its complaint, First Liberty argues, “Defendants’ statewide ban on religious worship services is a substantial burden on the religious exercise of Tabernacle Baptist and its members if they cannot meet for in-person corporate worship. For six weeks, since March 22, Tabernacle Baptist and its congregants have been unable to gather for religious worship in their sanctuary for fear of criminal prosecution despite their willingness to abide by social distancing precautions.”

To address the challenges posed by the COVID-19 outbreak, Tabernacle Baptist is committed to physically gathering in a manner consistent with social distancing guidelines issued by the CDC and Governor Beshear’s March 25 order to ensure the safety and well-being of all congregants, including: encouraging the use of personal protection equipment (“PPE”), ensuring the availability of hand sanitizer, separating the seating of households by a minimum of six (6) feet, and regularly disinfecting frequently touched surfaces.

In April, First Liberty and WilmerHale secured a temporary restraining order for On Fire Christian Church in Louisville, Kentucky. There, federal Judge Justin Walker stated in his order that Louisville’s ban on drive-in church services violated the Free Exercise clause “‘beyond all question.’”

As America re-opens and churches plan for responsibly returning to in-person meetings and services, it is more important than ever for First Liberty’s team of legal experts to be ready to put a stop to the singling out of people of faith with oppressive restrictions.

As attempts to criminalize religious gatherings are beginning to take place in states all across our nation, we know that the work we are doing to defend the First Amendment from these attacks is already making a historic impact for the future of religious freedom. And it is only through your support that we able to actively protect your right to live out your faith.

Will You Help First Liberty Stop the Criminalization of Religious Gatherings and Services?