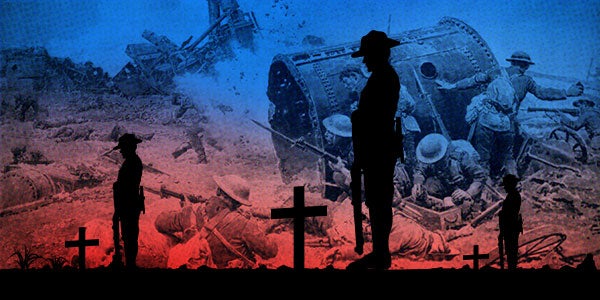 Read The Heroic Stories About The “Boys of Bladensburg” Who Fought and Died During One of the Greatest Military Campaigns in U.S. History

During October 1918 – at the height of the WWI Meuse-Argonne Offensive – millions of American soldiers charged forward into enemy lines. After numerous costly assaults, the Allied Expeditionary Force finally broke through the defenses of the German Empire.

Throughout this bloody military campaign, thousands upon thousands of American soldiers lost their lives service of their country – and in defense of freedom. But in the end, the heroic efforts of the Allied forces brought victory. The signing of the Armistice, marking the end of WWI, would come in just a few short weeks.

In this latest feature of the Liberty Watch, we remember three more fallen heroes from Prince George’s County, MD, who valiantly gave their all during one of the deadliest campaigns in American history, and whose names are honorably engraved on the Bladensburg WWI Veterans Memorial.

100 years ago, in the span of just four short months, Frank C. Rorabaugh, was shipped off to France as part of the 115 Infantry 29th Division as an appointed Private First Class. The young soldier, only 21 years of age, was killed in action on October 27th, 1918, thus becoming one of the many who made the ultimate sacrifice during the pivotal stages of the Meuse-Argonne Offensive.

Upon his death, his sister Hattie Walker wrote these words in his memory:

Somewhere in France,
on foreign soil,
Across the deep blue sea,
Sleeps there within a silent grave,
One who is dear to me.

The tragedy of war often leaves little for those who remain. But of the Boys of Bladensburg, Frank’s family was among the more fortunate. In a report from the Commanding Officer was the confirmation of his death under honorable conditions, along with instructions that Rorabaugh’s mother was to receive her son’s allotment of $15 and the sum from his War Risk Insurance, $10,000.

Though the details of Frank’s death were not noted, today we know the precise geographical location (35NE E324.76 N280.81) of his original grave in Commune Consenvoye, Meuse, France. A few months later, Frank’s body was reinterred at an American cemetery in France, with a cross-shaped headstone placed above his grave.

Maurice Snyder: “Always of the Highest”

Maurice Snyder was not yet 20 years old when he was assigned to Company F, 115th Regiment United States Infantry. Aboard the USS George Washington, Corporal Snyder began his voyage from Hoboken, NJ to France on June 15, 1918.

Just 4 months later, Corporal Snyder joined his band of brothers on the front lines of the Meuse-Argonne Offensive. He was killed in action, along with 56 other men of his company who were also killed or wounded in battle. His body was originally laid to rest in a French war cemetery. In May of the following year, his body was reinterred at the Argonne American Cemetery, Romagne-sous-Montfaucon, in Meuse, France, where his grave was marked with a cross.

One of Maurice’s cousins inquired about his death, to which Corporal Snyder’s Company Commander responded:

Snyder was wounded in the back by either a rifle or machine gun while in action on 9 Oct 1918, dying at Bois de Consenvoye, northwest of Verdun, east of the Meuse River. Cpl. Snyder fought gallantly and bravely stood by his post, at which place he rendered the supreme sacrifice. His services were always of the highest, and he was of excellent character. He was well liked by all the men of his company, as well as the Officers. We all deeply regret to know that he has made the supreme sacrifice and join you in sorrow. The body of Cpl. Snyder was buried in the graveyard of the 115th Inf., at the south edge of the Consenvoye Wood, west of Bratant Road. Please accept my deepest sympathy, coupled with that of all the number of the command over our loss.

In his Maryland hometown, Milton Edward Hartman was considered a hero. In June of 1917, Hartman registered for the draft and joined the National Guard of Maryland, assigned to Company F, 1st Regiment Maryland National Guard (Infantry). Hartman was held in high regard, esteemed by his comrades and quickly progressed to the rank of Corporal.

Fighting side by side with the men of Company K, 115th Regiment United States Infantry, Corporal Hartman was killed in action on October 10, 1918 – dying at the ripe, young age of 23 under honorable conditions during the Meuse-Argonne Offensive.

Corporal Hartman’s body was originally laid to rest in American B. A. Cemetery, Consenvoye, Meuse, France. In May of the following year, he was disinterred and buried at Argonne American Cemetery, Romagne-sous-Montfaucon, Meuse, France. A cross, along with identification tags, marked Milton’s grave.

On July 19, 1919, a Washington, DC newsletter recounted what was “A Beautiful Memorial Service” in Milton’s honor:

“All gave Corporal Hartman warm praise as a man, a patriot, a soldier, and a churchman. The whole countryside came to the memorial service, thronged the church and filled the churchyard ten feet deep around the church, listening and participating through the open doors and windows.”

The Bladensburg WWI Veterans Memorial, reflective of the cross-shaped markers placed on the graves in France, stands in tribute to the great sacrifice of 49 men of Prince George’s County who fought and died in WWI. Its presence reminds us of the profound cost of war, as well as the stories of the fallen heroes who gallantly served to defend freedom and who subsequently shaped the course of history.

And today, the Bladensburg Memorial must remain standing in their honor, lest we forget what we do not see.