GOV’T DOES GOOD! Recent 2 Victories are 2 Big Steps in the Right Direction 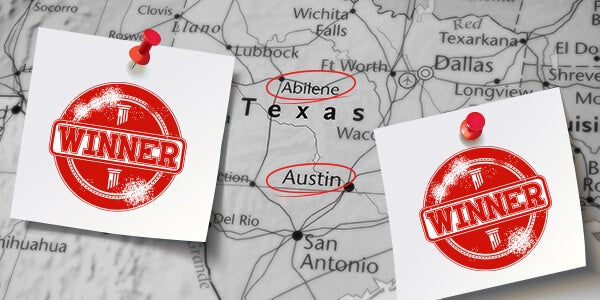 Government officials don’t always have the best reputation when it comes to defending religious liberty. That’s why it’s so pleasantly surprising when local officials actually do take action to protect Americans’ first freedom.

In the rare cases when local government officials or entrenched ‘Deep State’ bureaucrats do uphold religious freedom, it’s often because First Liberty attorneys step in to hammer the facts, the law and the Constitution.

Recently, our legal team sealed the deal on two cases down in the Lone Star State, as officials in Austin and Abilene, Texas did the right thing by reaffirming the religious liberties of their respective residents.

You could say, in a way, that these two local governments did their own version of the iconic “Texas 2-Step.” After all, what they did is certainly a step in the right direction.

Across America, churches and religious groups are core community partners, forming relationships with government and other local organizations to improve the lives of neighborhoods and residents.

Recently, Austin school district officials tried to prevent Celebration Church of Georgetown, TX from using a public school performing arts center. And that’s why First Liberty, along with Texas Values, stepped in to defend the church’s right – like that of any secular or religious organization – to have equal access to the use of public facilities.

And our attorneys got the job done.

The Austin Independent School District assured Celebration Church that it may continue to rent the Mueller Performing Arts Center on a month-to-month basis. The school district informed Senior Pastor Joe Champion that his church would have an equal opportunity – like other organizations in Austin – to use the performing arts center.

Now that’s worthy of kicking your boots up!

Why? Because countless numbers of churches and other religious congregations – in Texas and across the country – often make use of public buildings to hold their services and gatherings. That’s why it’s critical that religious organizations are given an equal footing in accessing public buildings, and First Liberty is there to ensure that churches and religious groups continue to have that right.

Read more about this case.

Extremist, anti-religion groups have a knack for picking easy targets.

But this time, these hostile groups picked the wrong fight down in Taylor County.

Judge Downing Bolls and the Taylor County Commissioners Court received a letter from an anti-religion legal group complaining about various displays in county offices, such as crosses and Bible verses displayed on county employees’ desks. These displays, the group argued, violate the law and must be removed.

First Liberty stepped in, advising the county that public employees do not surrender all their rights when they accept employment and that the law protects government employees from religious discrimination.

In the end, the county’s officials chose the high road, concluding that religious government employees enjoy the same First Amendment rights as their non-religious peers – and thus allowed county employees to keep their displays.

Thankfully, Taylor County was able to make a decision based on the facts and the law, protecting the constitutional rights of its citizens instead of caving to the demands of an anti-religion special interest group.

Read more about this case.