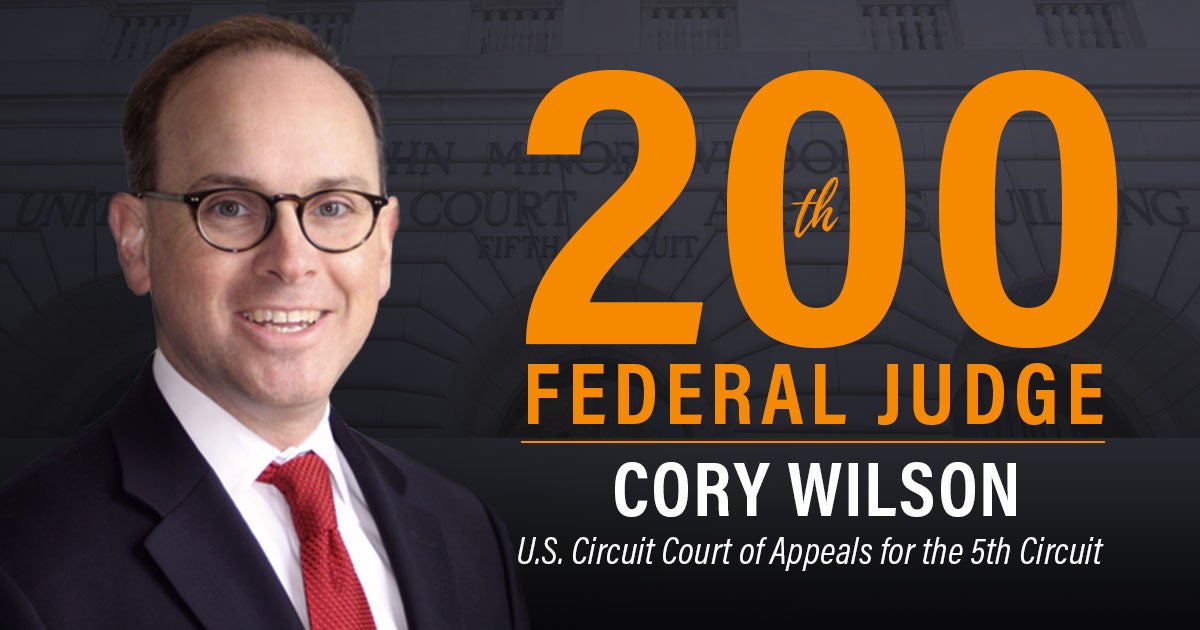 Today, we’re reporting a judicial milestone that will have a generational impact in our nation’s federal courts for the next 30 to 40 years, and that will help preserve religious freedom for our children and grandchildren.

The U.S. Senate recently voted to confirm Cory Wilson to the U.S. Court of Appeals for the Fifth Circuit, marking a record-breaking 200th federal judge appointed by the current president.

Judge Wilson fills the final vacancy (the critical “swing” seat) left on the 5th Circuit, and his confirmation also means there are zero (0) vacancies left at the circuit court level.

But, just how far ahead of previous presidents are the current president and Senate Majority Leader Mitch McConnell?

Thanks to your generous support, First Liberty’s team of experts was able to thoroughly vet Judge Wilson’s record on religious liberty, and provide our analysis to the Senate and the administration.

Let’s briefly look at how federal judges played an essential role in restoring religious freedom during one of our nation’s most vulnerable and unprecedented moments.

We need YOUR financial support to maximize this once-in-a-generation opportunity to reclaim America’s courts.

Judge Wilson will join Judge James Ho on the 5th Circuit, the latter who’s also demonstrated to be a stalwart protector of religious liberty.

“People of faith demoralized by coercive shutdown policies, that raises a question: If officials are now exempting protesters, how can they justify continuing to restrict worshippers? The answer is that they can’t. Government does not have carte blanche, even in a pandemic, to pick and choose which First Amendment rights are ‘open’ and which remain ‘closed.’ ”

Judge Justin Walker is another federal judge who recently issued a pivotal ruling in one of First Liberty’s cases (On Fire Christian Church v. Fischer).

As a district court judge in Kentucky, he heard the first case in the nation protecting the right of churches to safely gather again for worship during the pandemic. His commitment to protecting religious freedom was made clear when he wrote:

Only a few weeks after issuing this opinion, the U.S. Senate confirmed Justin Walker to become a judge on the D.C. Circuit Court of Appeals, considered the second most important court below the U.S. Supreme Court.

A Defining Moment for the Future of America’s Courts

As we face a constitutional crisis and all-time high attacks on our First Amendment freedoms, the federal bench needs more originalists like Judges Ho, Phipps, Walker and Wilson—judges who will respect religious freedom and protect the Constitution.

As part of First Liberty’s national fight to reclaim religious liberty, our expert legal team continues vetting and analyzing the records of tens, even hundreds, of federal nominees. But the window of opportunity to provide our expertise on judges to the U.S. Senate and administration is closing…and it’s closing fast.

It takes an enormous amount of manpower, work hours and resources to fully examine the record of nominees—and it’s only with YOUR financial support, right now, that we can maximize this once-in-a-generation opportunity.

Will you consider making a critical donation to First Liberty today?