Pin ‘em to the Top: 3 Big Religious Freedom Cases to Keep on Your Radar This Fall 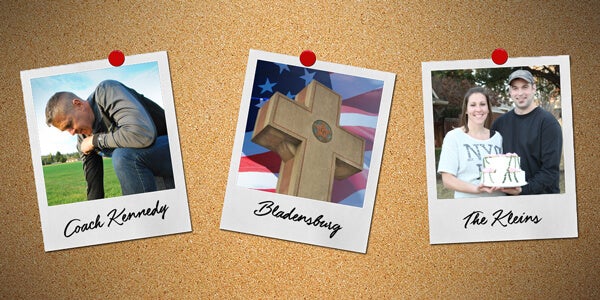 It all comes down to this.

On the first Monday of October, the Justices of the U.S. Supreme Court will be convening for the start of their annual term.

And for us here at First Liberty – as well as for our clients and people of faith throughout America – this year’s term is set to be unlike any we have seen in the past. Right now, our attorneys are appealing three critical cases to the nation’s highest court and the outcome on each could set life-altering precedents that affect millions of Americans.

And make no mistake about it. We know the stakes are higher than ever before.

The decisions the High Court makes on these “Big 3” could affect the freedoms, rights, and the values that everyday Americans – like you – hold near and dear, especially the right to freely live according to your religious beliefs.

Kicking things off is the Coach Kennedy case, where the Court’s decision could affect your right to live out your faith without the fear of being fired. This could have a profound impact on the rights of public school employees and teachers of all faiths. If the current Circuit Court’s decision is allowed to stand and Coach Kennedy’s rights aren’t vindicated, then Jewish teachers could be fired for wearing a yarmulke in sight of students and Muslim educators could also face discrimination for wearing a hijab to work.

Similarly, if radical atheists succeed in bulldozing the Bladensburg WWI Veterans Memorial, it’s only going to be a matter of time before the wrecking ball turns on Arlington National Cemetery and the thousands of memorials with religious imagery across the country. And because we are prone to forget what we do not see, the destruction of such memorials would essentially erase from our memories the sacrifice and bravery of America’s fallen heroes – like the Boys of Bladensburg.

And last, but certainly not least, as we prepare our petition to the U.S. Supreme Court to hear Aaron and Melissa’s case, the Court could soon issue a ruling on an all too important issue of our time: the right to earn a living running your business in accordance with your religious beliefs.

The fact remains. No one in America should be forced by the government to choose between their faith and their livelihood. But Oregon bakers Aaron and Melissa Klein were faced with that untenable choice. And because they chose to live and act in a manner consistent with their religious convictions, the State of Oregon penalized them to the point of bankrupting their family-owned bakery.

Clearly, the stakes are high as First Liberty attorneys hone their attention to the beginning of the Supreme Court’s term, but we are heading forward with positive expectation. Why? Because our legal team continues to have unprecedented victories at the highest federal levels, including the Supreme Court. We are winning where it counts and where it matters most, restoring First Amendment rights and getting the results for Americans who want to see religious freedom thrive.