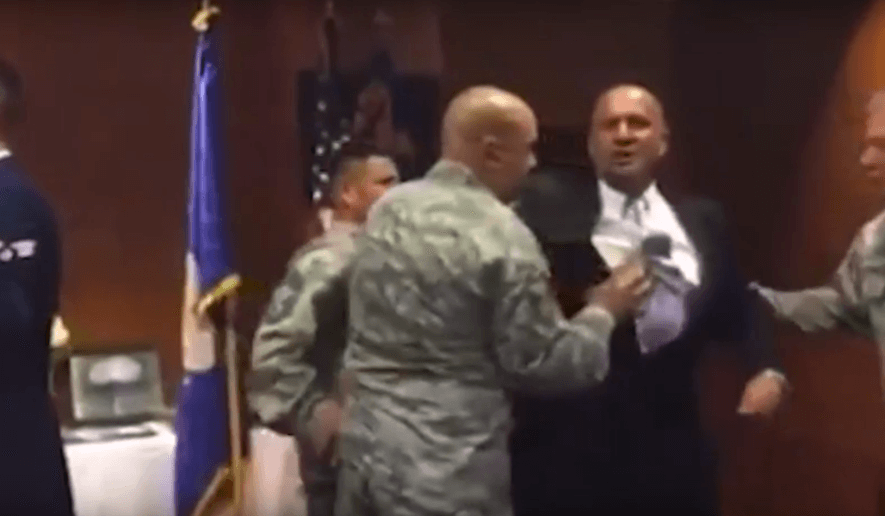 On June 20, 2016, First Liberty Institute sent a demand letter to the United States Air Force on behalf of Oscar Rodriguez, Jr., a decorated 33-year Air Force veteran. Rodriguez was invited to give a flag-folding speech at a private military retirement ceremony held at Travis Air Force Base, but military personnel forcibly removed Rodriguez from the ceremony because his speech was to include the word “God.”

“The Air Force had no right to assault a citizen, much less a 33-year military veteran, because they didn’t want him to mention ‘God,’” said Mike Berry, Director of Military Affairs for First Liberty Institute. “Mr. Rodriguez has a constitutional right to free speech and religious expression, even on a military base.”

“The military broke the law and abused its power,” said Berry. “We expect the Air Force to hold those responsible accountable, and allow Mr. Rodriguez to continue honoring the flag and other veterans who have sacrificed for our country.”

An Air Force veteran, Rodriguez enlisted in the Air Force Reserve in 1980 and retired in 2013 as Senior Master Sergeant. During his service, Rodriguez received many accolades and decorations. He also made great sacrifices for his country—even losing his business as a result of being called to active duty. In fact, Senator Mary Landrieu (D-LA) spoke from the U.S. Senate floor about Rodriguez’s story.

For years, Rodriguez has regularly performed a patriotic flag-folding speech at retirement ceremonies and civic and patriotic events. In 2013, Congressman John Garamendi (D-CA) sent a hand-written note that expressed how moved the congressman was when Rodriguez delivered the speech at the California State Fair.

The speech, which Rodriguez has given hundreds of times, describes what the American flag symbolizes. The speech discusses how the flag represents the ideals of the Declaration of Independence and the Constitution. It also contains references to the word “God,” including the following three sentences that conclude the speech:

SPEECH BANNED FOR INCLUDING “GOD”

Roberson still strongly desired for Rodriguez to give the flag-folding speech at the ceremony as planned. He and Rodriguez attempted to work with higher authorities at Travis Air Force Base, even offering to place notices that stated that the word “God” would be mentioned. But they never received a response from the authorities.

THROWN OUT OF PRIVATE RETIREMENT CEREMONY

Roberson’s private retirement ceremony was held as scheduled on April 3, 2016. Rodriguez stood firm in his commitment to Roberson and attended the ceremony. As Roberson had requested, Rodriguez took his position to perform the flag-folding speech. However, when he stood to deliver the speech, a uniformed Airman approached him and warned him, saying “You’re really going to do this?”

When Rodriguez began his speech, the Airman assaulted Rodriguez by forcibly grabbing him. Other Airmen joined in, physically dragging Rodriguez out of the ceremony. Travis Air Force Base officials then kicked Rodriguez off the base.

Watch the video of the assault.

Rodriguez expressed his shock and humiliation. He stated in a video:

“To even imagine that I would be removed while the American flag is being unfurled and open—the flag which represents freedom of speech, freedom of religion, freedom of the press…it’s horrifying.”

Rodriguez said that it was “one of the most humiliating experiences” of his life. “I have given more than three decades of service to the military and made many sacrifices for my country,” said Rodriguez. “To have the Air Force assault me and drag me out of a retirement ceremony simply because my speech included the word ‘God’ is something I never expected from our military.”

In its demand letter, First Liberty states that the actions taken against Rodriguez violated his constitutional rights. It asks the Air Force for an admission of wrongdoing, an apology, and for the responsible parties to be held accountable. The letter also requests assurances that Rodriguez’s constitutional rights will be respected in the future.

First Liberty Institute is dedicated to protecting Rodriguez’s right to include the word “God” in his speech and the religious liberty rights of all members of the U.S. military. To learn more about religious freedom in the military, download First Liberty’s free Religious Liberty Protection Kit for the U.S. Military.