Find out how well you know the First Amendment and learn how to respond when you hear one of these popular myths about freedom of speech or religion. 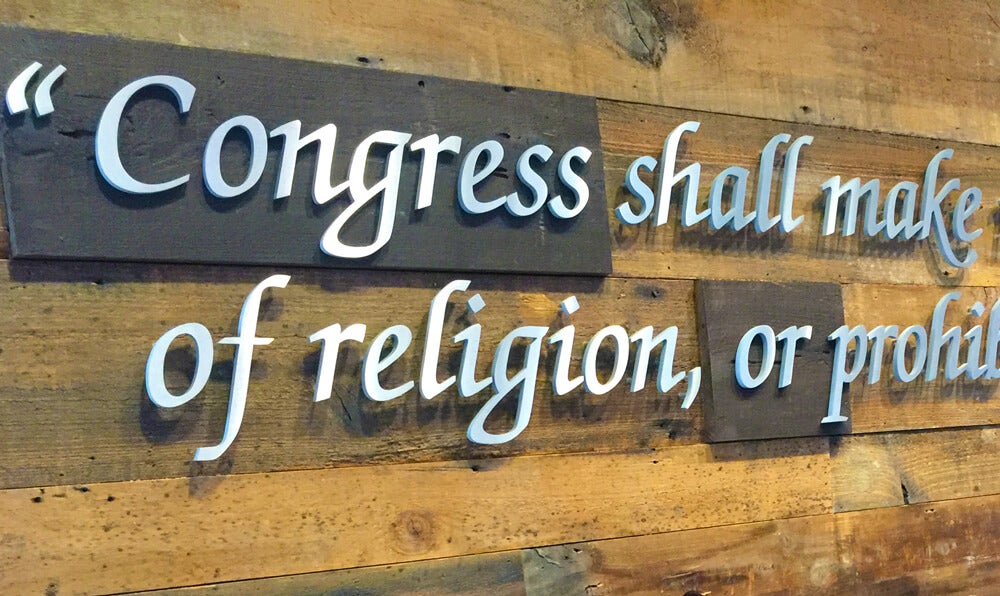 In a world driven by social media and sound bites, we are constantly bombarded by claims of factual or legal authority. Often, it can be difficult to decipher what is true, what is legal, and what is just plain table-pounding.

It may come as a surprise to learn that much of what is popularly believed about the Constitution falls into the “table-pounding” category—and that much of the confusion involves the First Amendment, including religious freedom.

TRUTH: Often, we hear someone accuse another private citizen of violating his or her First Amendment rights.

That’s not to say, however, that religious freedom is unprotected in the private sector, like at work. While the First Amendment might not apply to an employer, if an employer engages in religious discrimination against an employee, it may be violating Title VII of the 1964 Civil Rights Act. But that’s not a First Amendment or Constitutional issue.

MYTH #2: America’s founders intended the First Amendment to apply at both the state and federal levels.

MYTH #3: The First Amendment creates a strict “separation of church and state.”

TRUTH:Neither the words nor the concept of a strict “separation of church and state” are found anywhere in the First Amendment or the Constitution.

The Supreme Court’s use of the “wall of separation between church and state” stemmed from the phrase’s appearance in a letter from Thomas Jefferson to a Baptist committee in Danbury, Connecticut. Though Jefferson’s words have been used by some to justify a radical separation of religion and government, such a reality would be out of step with the actions of Jefferson himself. For example, Jefferson attended church services held on public property, supported Bibles and missionaries to the Indians and even proposed a draft national seal depicting Moses and the Red Sea miracle.

Many commentators have asserted that, taken in context, Jefferson’s words were meant to communicate that there would be no national church or any federal discrimination on the basis of religion. This would be consistent with Jefferson’s actions and other writings.

MYTH #4: The First Amendment guarantees a person’s right not to be offended.

TRUTH:The First Amendment does not protect one from being offended. In fact, many would argue the First Amendment is necessary precisely because it protects the right to espouse beliefs that others may find offensive. After all, the very notion that America should be an independent nation was highly offensive to the King of England at the time of the founding.

Free exercise of religion inherently implies that America should be a place where a diversity of religious views are publically expounded and lived out. Since such a diversity will encourage the airing of differing religious beliefs about which citizens feel strongly, it follows that many people will be offended—a small price to pay for freedom.

So take care to educate yourself regarding the truth about the First Amendment. And the next time you hear these popular myths, pound the law and the facts, not the table.

Radical groups are on the prowl looking for ways to suppress religious expression throughout America.

Contact First Liberty for immediate help if your religious speech has been censored or attacked.