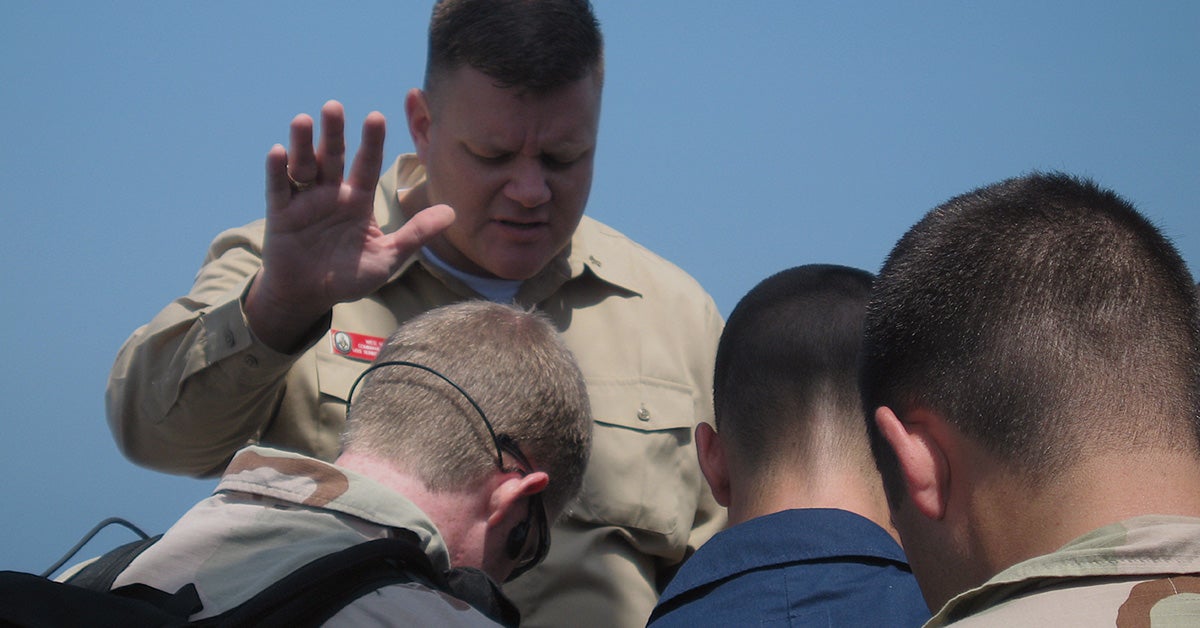 As our nation commemorates the 70th anniversary of Armed Forces Day, I find myself reflecting on an experience I had while serving on Active Duty.

On a cold night, sparkling lights began to appear as we quickly descended to land in northern Afghanistan. We were flying to visit some of the Navy SEALs on the fight against terrorism, and the sparkles looked like new fallen snow out of the small aircraft window.

In the half moon light, the Marine Gunnery Sergeant sitting across from me said quietly: “Those little sparklers are small arms fire.”

We swooped down suddenly, with no lights inside or outside the aircraft. The rapid descent gave the enemy only the briefest window to train their weapons on us.

The small caliber ammunition wasn’t likely to cause us any serious danger. But there was always a chance that someone could have gotten their hands on something deadlier. So, I bowed my head slightly and prayed quietly for protection for us all.

As a military chaplain, I had come to the remote, rugged mountains close to the border with Pakistan to serve as a flesh-and-blood reminder for the courageous young men on the front lines. I was to remind them they had not been forgotten by God or by their loved ones back home.

On previous occasions I’d carried my Marine issue M-16A2. Now, as a Navy Chaplain, all I had was a Bible, my RP1 and our Mount-out Box for Religious Services. It was enough, though, because I knew that I was on a divine mission and my Religious Program Specialist was going to protect me if needed.

Chaplain field visits were typically restricted to well-secured situations, not only for our safety but for those deployed—they didn’t need the added responsibility of looking out for unarmed visitors, should an incident occur.

But if Navy SEALs could have their own unique way of doing things within the broader military culture, then so could the chaplain serving them. So, in addition to visiting FOB’s (Forward Operating Bases), I went out beyond the wire to visit teams deployed in the surrounding hills.

I considered it part of my calling to ensure that those who were willingly putting themselves in harm’s way knew that, as best we could, the rest of us had their backs when it came to spiritual resiliency and support. If they were willing to go to some of the farthest corners of the earth to keep the rest of us safe, I figured it was only right that I do the same to assure them of our prayers and our gratitude. Hence, my unusually extreme efforts to reach them.

It was heart-warming to see the appreciation in the eyes of the men I served in Afghanistan territory. I counted it a privilege to care for some of America’s finest—resolute, rugged young men who were prepared to put it all on the line for their family, country and friends, and millions more they would never know.

On this Armed Forces Day, we must be conscious of our debt and honored gratitude for those who are serving, those who make exceptional sacrifices every day. It’s a unique day to remember all serving in the Army, Navy, Marine Corps and Coast Guard for the defense of our great American Republic.

This year, let’s express our thanks to those who wear our Nation’s cloth, who serve faithfully and stand watch for our freedoms—including religious liberty and the freedom to live out our faith.

Will you join me as we pray for them?

Father God, we pause for a moment to call upon your Holy Name on behalf of our military. We pray, that this mighty plague of war and pestilence of disease may pass away and we can bring all of our Armed Forces home. Yet, if it be your will Lord that you use our military for your ministry let it be said that the judgments of the Lord are true and righteous altogether. Help us Lord to be grateful and show our love and appreciation for those serving.

We pray that you would let us finish the work we are in, to care for those who are in the battle, to bind up our nation’s wounds, and for our military families who are serving who sacrifice so great a price on the altar of freedom. We pray for a peace that transcends all human understanding a peace that is just and lasting among ourselves and with all nations. We pray Lord for your hand of protection on those serving as we stand on your promises that you Lord are our refuge, our place of safety and our deliverer. As the Psalmist writes…Lord you will rescue us from every trap and protect us from deadly disease. You Lord, will cover us with your feathers. You Lord, will shelter us with your wings. We pray for our Armed Services that your faithful promises are their armor and protection. For it is in Christ’s name we pray. Amen.