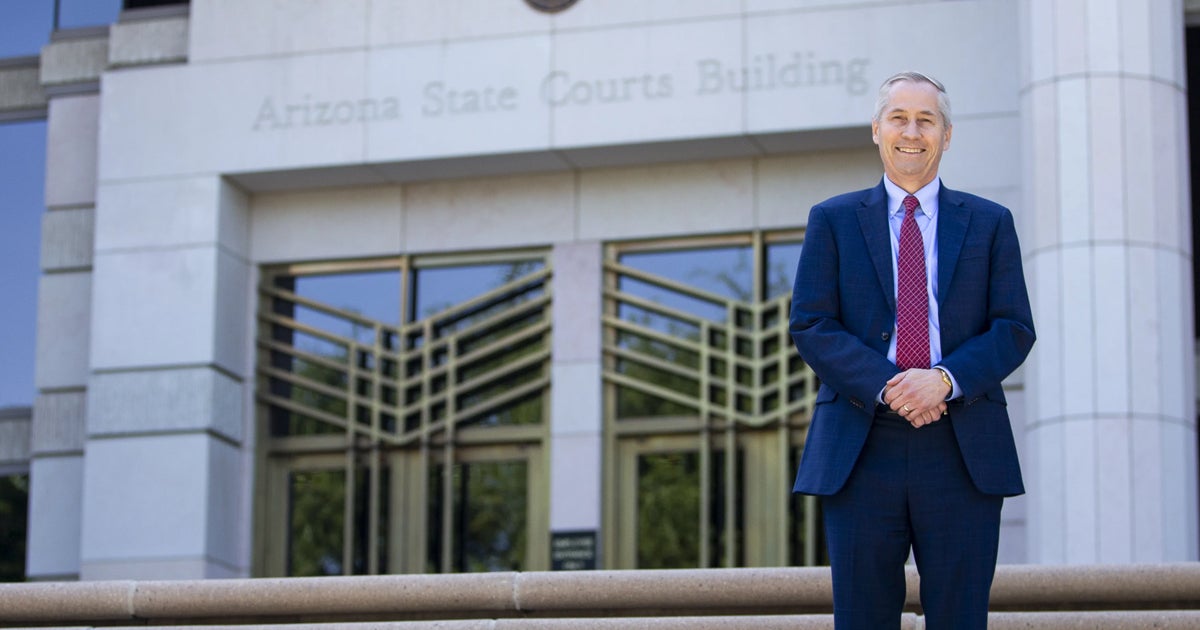 Gould brings decades of experience as an attorney, prosecutor and judge. His impressive and proven record in defending religious liberty and our constitutional freedoms make him a tremendous addition to our team. Having him at First Liberty will help lead us toward more victories for our First Freedom in the future.

Here’s a brief look at his distinguished career in the law and his achievements during his many years of public service.

Gould served most recently as a Justice on the Arizona Supreme Court. He was nominated to the state’s highest court by Governor Doug Ducey in 2016. He served on the bench until 2021, when he resigned his judgeship to campaign for state Attorney General.

In 2019, Justice Gould wrote the majority opinion in Brush and Nib v. City of Phoenix, an important religious freedom and free speech case. It involved an art studio that specializes in hand-painting, hand-lettering and calligraphy for weddings and other events. The owners declined to create art for same-sex weddings based on their Christian beliefs about marriage. A sweeping city ordinance, however, would have forced them to design custom artwork expressing messages that violate their faith.

The Court ruled in favor of the Christian business owners and held that the city of Phoenix cannot force artists to create wedding invitations expressing messages that conflict with their deeply held beliefs. Justice Gould didn’t mince words. He wrote:

“The rights of free speech and free exercise, so precious to this nation since its founding, are not limited to soft murmurings behind the doors of a person’s home or church, or private conversations with like-minded friends and family. These guarantees protect the right of every American to express their beliefs in public. This includes the right to create and sell words, paintings, and art that express a person’s sincere religious beliefs.”

“Freedom of speech and religion requires tolerance of different beliefs and points of view. In a diverse, pluralistic society such as ours, tolerance of another’s beliefs and point of view is indispensable to the survival and growth of our democracy…For this reason, we have always recoiled at those governments and societies that repress or compel ideas or religious beliefs.”

Before serving on the Arizona Supreme Court, Gould spent more than fifteen years serving as a state trial court and appellate court judge. He was a judge on the Arizona Court of Appeals from 2011 to 2016 and served on the Yuma County Superior Court from 2001 to 2011.

Governor Ducey described Gould as someone who’s been “committed to law and order throughout his career, working to ensure justice for victims and upholding the Constitution.” Similarly, Governor Jan Brewer—who appointed him as an appellate judge—said that Gould exemplified “a philosophy of judicial restraint” and is someone with a strong conviction to “interpret and apply laws as written” and “steadfast respect for the doctrine of separation of powers.”

In addition to his time on the bench, Gould was a prosecutor for several years. He lived in Yuma for more than two decades in an area that is a hotbed of cartel activity on the U.S.-Mexico border. Gould said that living and working as a prosecutor in Yuma made the danger and prevalence of the drug trade more evident to him. His experience litigating major criminal cases and putting cartel members behind bars includes serving as:

Gould also worked in private practice for a number of years, focusing on civil litigation. His experience includes working for the law firms of Gallagher & Kennedy and Snell & Wilmer in Phoenix, Arizona.

Gould earned his law degree from the Northwestern University School of Law in 1990, and received with highest honors his undergraduate degree from the University of Montana in 1986. He and his wife Connie have two children, George and Anna.

Never Forget Where You Came From

Gould credits his “humble” upbringing as a big reason why he decided to go into the legal field. In an interview with The Arizona Republic, he said: “You always have to remember your roots. You can’t forget where you came from.”

His mother was a legal secretary for 30 years and introduced him to the legal profession during his childhood. He recalls that his family made incredible sacrifices, citing this as one of the things that most impacted his career. Gould says that the purpose of pursuing a career in law was always to help people and to be a public servant.

We recently caught up with Gould so he could tell us more about his life, career and why he’s excited about joining First Liberty:

What motivated you to become an attorney?

“I became a lawyer to fight for people who are unable to fight for themselves.  Like so many others in this country, my parents were what I refer to as the Forgotten Americans; honest, hard-working people of strong faith and modest means. I became a lawyer to make sure that the Forgotten Americans like my parents have someone to someone to stand up and fight for them.”

What is a vital lesson you learned from your many years as a lawyer, prosecutor and judge?

“The best lawyers are those that love and care about people. If you don’t like people, law is the wrong profession for you.”

Why did you decide to join First Liberty and fight for religious freedom?

“Religious liberty is essential to protecting individual autonomy and freedom of conscience. However, this fundamental right, which is guaranteed by our Constitution, is in grave danger. As a result, I believe that it is my solemn duty and responsibility to protect religious freedom for all Americans, and I am honored to join First Liberty in fighting for this fundamental right.”

What do think is the most pressing threat to religious liberty today?

Are you optimistic about the future of religious freedom in America?

“I am guardedly optimistic. When I ran for Attorney General in Arizona last year, I was surprised by the number of people of faith I met on the campaign trail. But they were timid and quiet, almost embarrassed to speak about their faith. This has to change. Contrary to characterizations by the media, Christians are, by their nature, tolerant and kind. They are also very private, and do not like to get involved in the public arena. But Christians must also understand that they are the salt and light of the world, and that throughout the history of the United States, we have had an important role in serving as a positive influence on society. Indeed, every great reform movement in the history of this country, from the American Revolution to the Civil Rights movement, started in the church. Now, more than ever, it is important for Christians and their leaders to show courage by exercising their First Amendment right to express their beliefs.”