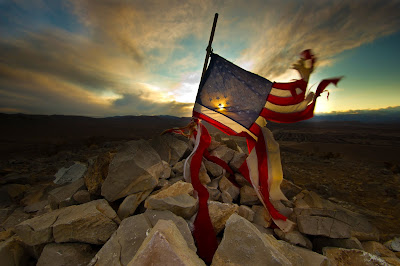 “The American Legion and Liberty Institute both unapologetically stand ‘For God and Country,’ a stance that will never waver. We appreciate the outstanding work that Liberty Institute has done in protecting our nation’s veterans memorials.”

It’s a cruel irony. Veterans Day is less than one month away—but memorials to our veterans are under year-round legal attack. And while flags, patriotism and yellow ribbons will fly high as America observes Veteran’s Day on November 11, we cannot afford to limit our support of veterans to just one day a year.

Though the military battle for many of our veterans is over, many of them continue to fight another battle on a regular basis—namely, the battle to honor their comrades—both living and fallen—through veterans memorials.

In honor of our veterans, we must fight in court to save the tributes to their service.

THE WAR ON VETERANS MEMORIALS

In an effort to erase any semblance of religious imagery from the public arena, organizations like the ACLU, American Atheists Association, and Americans United for Separation of Church and State have sued and are suing for the removal of veterans memorials across the country.

These organizations claim that any memorial on public land that uses images or text that might be associated with religion violates the Establishment Clause of the First Amendment. But legal experts at Liberty Institute know that historical context, case precedent, and the Constitution itself say otherwise.

Liberty Institute is currently defending one of the oldest World War I veterans memorials in the United States, currently under legal attack and threatened with removal. When the lawsuit was filed, attorneys at Liberty Institute were quick to take action, and we are now awaiting the decision by the Court that will determine our next move.

In the past year, Liberty Institute conducted extensive discovery and then completed complex briefing for our Motion for Summary Judgment on behalf of The American Legion in defense of a historic WWI Veterans Memorial in Bladensburg, Maryland.

Built by The American Legion and completed in 1925, the Bladensburg WWI Veterans Memorial serves to honor 49 men from Prince George’s County, Maryland who died in WWI. Part of the Memorial is in the shape of a cross—an iconic symbol for the fallen of WWI and the primary grave marker in U.S. cemeteries overseas, in which many fallen of WWI are buried. Mothers of sons who fell overseas raised a portion of the initial funding for the memorial.

Despite the fact that the memorial stood uncontested in Bladensburg for nearly 90 years, the American Humanist Association sued for its removal in February of 2014, alleging that the public ownership, maintenance, and display of the memorial violated the Establishment Clause of the First Amendment to the U.S. Constitution.

Liberty Institute, on behalf of The American Legion,jumped to the defense of the memorial. We first asked the Court to allow the Legion to intervene in the lawsuit to defend the Memorial, which the Court granted. We then conducted an extensive period of discovery, during which we secured one of the most respected World War I academics in the world to serve as our expert witness. Most recently, in August, we completed briefing for our Motion for Summary Judgment (a presentation of the case facts and relevant law), explaining to the Court why the Memorial is well within the law and why we should win the lawsuit without a trial. We are currently waiting on the Court’s decision. Read more about Liberty Institute’s defense of the Bladensburg WWI Veterans Memorial.

WINNING FOR THE MEMORIALS—SO FAR

Recently, Liberty Institute successfully defended one veterans memorial and helped defend another in cases that gained national media attention and were heard at the United States Supreme Court.

·      In 2012, the Mojave Desert Veterans Memorial Cross—a tribute to WWI veterans—was allowed to remain in the Mojave Desert in Northern California after a lengthy legal battle, theft, and a trip to the U.S. Supreme Court. Read more about Liberty Institute’s work to save the Mojave Veterans Cross here.

Liberty Institute is determined to fight for our veterans and the right to honor them through veterans memorials. We have seen in our past cases what determination can do to protect these memorials, and we are confident that we will prevail in the defense of the Bladensburg WWI Veterans Memorial and others that come under attack.

Don’t wait until Veterans Day—and don’t wait until the next attack on veterans memorials. Make a decision today to remain aware, educated, and prepared to help us defend veterans and their memorials. They stood for us—now it’s everyone’s turn to stand for them.

If you or someone you know is currently serving our country in the military, please read our new Religious Liberty Protection Kit for the U.S. Military to learn about religious liberty rights in the armed services.