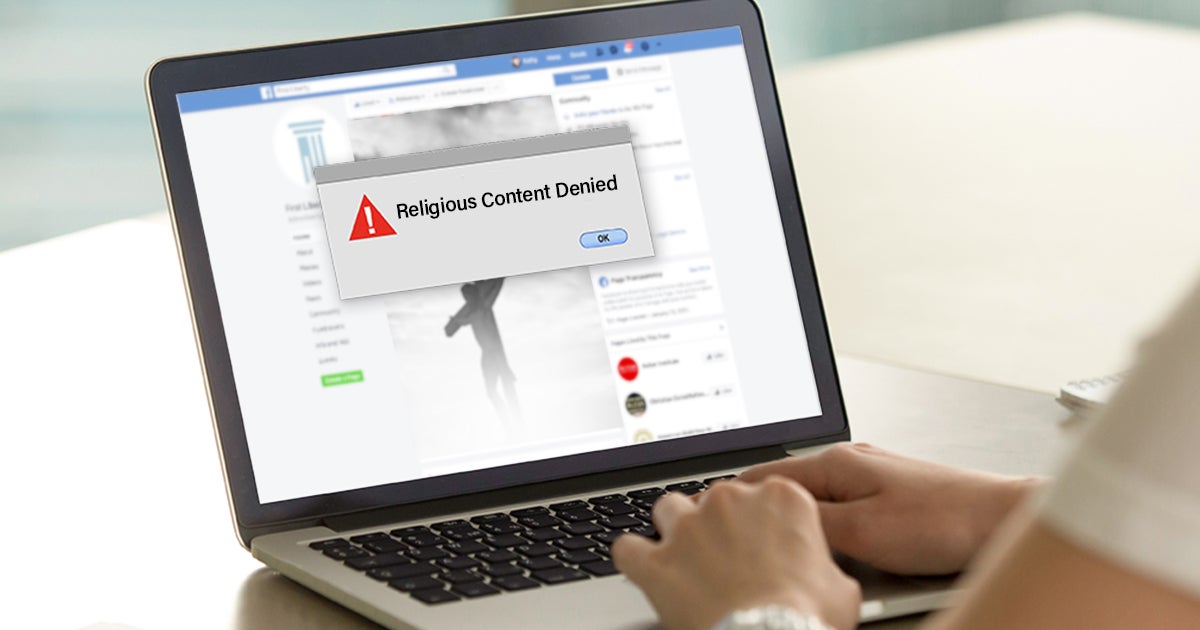 In a little over a week, Christian and Jewish communities all across America will celebrate some of their most important holidays – Easter and Passover, respectively. These festivities are a central part of how these religious communities exercise their constitutional right to live out and express their faith.

And if you’re connected to social media, it’s likely that you’ll come across an ad from a church or synagogue inviting you to one of their special events.

But though social media platforms are considered the great equalizers in the marketplace of ideas, there is a looming threat that certain voices – religious and conservative voices, in particular – are being censored from the online social world.

Don’t believe that this type of censorship could ever happen today?

But this isn’t a standalone incident.

The list of similar actions by social media platforms is extensive – showing us that even though most Americans would never participate in a book burning, we live in a culture that’s very willing to censor ideas online.

Most Americans despise the thought of burning books.

In our country, it is a point of pride that we would never participate in a book burning, no matter how objectionable we find the book in question. Collectively, we celebrate “banned book week” where librarians across the country encourage us to actually read a book again and perhaps even engage with their, at least at-one-time, controversial ideas.

Burning books is not only about destroying the content of the books, it is also about sending a message. After all, there are much more discrete ways to discard a book, like simply throwing it in the trash. Book burnings are public and ostentatious decrees that the content of the book is so objectionable to you that it needs to be destroyed. The idea of burning books conjures images of oppression, censorship, and the quashing of free thought.

Yet, we see the same sort of public calls for censorship on the Internet all the time. As long as we term it “hate speech,” our culture is much more comfortable with burning those books. The European Union recently congratulated Facebook and Twitter for how much faster they are at removing content deemed objectionable.

The problem with the idea of hate speech is that it is an ambiguous concept. Does an off-color joke count as hate speech? Derogatory slurs? What about an unpopular political position? Or a not-so nice comment about groups? Or is it just about direct threats of violence against an individual?

And more importantly – who decides what is okay and what is not?

In a recent piece, the New York Times asked how its readers define hate speech. The results showed just what a mushy concept it is even among people who are in favor of banning it.

The justification for banning so-called hate speech is that the ideas expressed are dangerous. But this is the same justification that has been used to burn books. Words and expressions that some people find hateful have been conflated with credible threats of imminent violence.

Maybe the reason we can emphatically say that book burning is immoral, but encouraging Twitter to take down offensive content is okay is because books are not the primary way ideas spread these days. Bad books aren’t seen as a threat in the same way that bad tweets are.

Sometimes, we do recognize the evils of censorship online. We all shake our heads at Google for catering to China’s obvious censorship of political ideas, for example. But, all too often, domestically, our embrace of banning hate speech encourages private companies to censor ideas that they find distasteful.

Have you or your house of worship been censored online?
Make us your “First Call” and request immediate legal assistance!

Still, there is something different about giant social media networks who hold themselves out as neutral and open to everyone. These are the new public parks. These are the new libraries. This is where people dialogue, share their views, and get a significant amount of their information.

These companies should recognize that the best answer to speech that they find hateful or offensive is more speech, not less. The way to combat bad ideas is to expose them to the light, not to let them fester in the shadows.

Even if we can’t (or shouldn’t) legally require private companies to open their forums to free expression, we should encourage them to do so. Our discourse would be better for it.