Beware the Freedom of Worship Trap 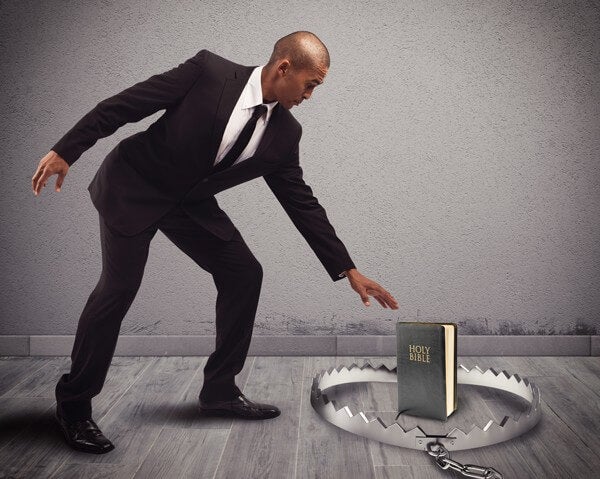 Recently, the governor of a large state was asked whether businesses owned by people of faith should be able to decline participating in same-sex weddings on the grounds of their sincere religious beliefs. This would include First Liberty Institute clients such as Aaron and Melissa Klein (owners of Sweet Cakes by Melissa) and Edie and David Delorme (owners of Kern’s Bakery).

This governor’s answer was a textbook example of the “Freedom of Worship Trap.”

“People talk about religious liberty,” he said, “and I think frankly our churches should not be forced to do anything that’s not consistent with [their beliefs].” But as for the faith-based baker being asked to participate in a sacred ceremony that violates a 2,000-year-old doctrine of their faith? “Make the cupcake,” he dismissively concluded. “Move on.”

HOW TO TRAP A PERSON OF FAITH

Here’s how the Freedom of Worship Trap works, as illustrated by the governor’s answer:

First, you insist you will protect churches and religious institutions from anything that would violate their faith. Notice the part of the answer saying “our churches should not be forced to do anything that’s not consistent” with their beliefs. Sounds good, as far as it goes.

Second, you limit such protection. Explicitly non-profit religious institutions like churches get protected. But not religious individuals, especially out in the marketplace or workplace where their faith can touch more people but where they are most vulnerable to economic retaliation. Out there, open exercise of their faith would be unprotected and allow government persecution..

YOUR FAITH IN A BOX

The Freedom Of Worship Trap was articulated last year by influential national TV commentator and New York Times columnist Frank Bruni. He assailed as bigots those whose sincere religious beliefs prevent them from participating in business activities that support sexual behavior their faith considers off limits. Bruni wrote:

“I support the right of people to believe what they do and say what they wish—in their pews, homes and hearts.”

There it is. Both elements of the Trap: First, “I support the right of people to believe what they do and say what they wish.” Second: “in their pews, homes and hearts.” It’s faith in a box.

In this boxed-in faith, “freedom of worship” means freedom to engage in religious activities like singing, preaching, praying, and believing. Just so you keep it to yourself – in your church or home.

Of course, the First Amendment to the U.S. Constitution doesn’t restrict protected religious activity to “worship.” That foundational Amendment says that Congress shall not prohibit “free exercise” of religion. The 14th Amendment extends that to all states.

“Free exercise” is something that encompasses every area of life beyond the four walls of a church or home, and outside of the thoughts in your mind. “Free exercise” goes with you to work, to public meetings, to school—everywhere.

THE FREEDOM OF WORSHIP MANTRA

But despite the First Amendment’s insistence on “free exercise” of religion, Freedom of Worship has become the mantra of those who want religious influence excluded from public, including:

Wolfson initially appeared to agree with First Liberty’s position that Americans should be free to dissent from the Supreme Court’s same-sex marriage decision—but then Wolfson added the condition that such a faith-based stance couldn’t be permitted in the marketplace since that would be “discrimination.”

A person of faith’s refusal to openly contradict their own religion—even concerning thousand year old doctrines—is classified as “unlawful discrimination.”

IN PRACTICE, “FREEDOM OF WORSHIP” HAS NOT PROTECTED FREEDOMS

The goal of the secular Left isn’t simply to contain religion, but eradicate it. First Liberty Institute attorneys see this in real-life cases.

Dr. Eric Walsh, a First Liberty client, was fired from two jobs—despite a stellar record in the field of health administration—because of sermons he preached inside the four walls of his church. So much for “freedom of worship.”

First Liberty clients such as Vintage Church near New Orleans, Christian Fellowship Missionary Baptist Church and Latter Day Deliverance Revival Center in Houston, Congregation Toras Chaim in Dallas, Opulent Life Church in Holly Springs, Mississippi, and others have been among the targets of legal attacks on houses of worship in recent years. They found little protection in the “freedom of worship” box.

Insight for Living Ministries, a First Liberty client, is among dozens of non-profit ministries facing crippling fines for refusing the federal government’s mandate to facilitate participation in health insurance providing abortion drugs. The fact that they are “religious institutions” has given them little protection.

Catholic adoption agencies have been put out of business, ministers have been fined, and the Salvation Army has been penalized, and more. So much for “freedom of worship.”

On two separate occasions, the Solicitor General of the United States has warned churches and ministries that they could be potential targets of legal action. He said tax-exempt status for Christian schools that opposed same-sex marriage would be “an issue.” He said a church’s freedom to hire is not protected by the religion clauses in the U.S. Constitution. Fortunately, Courts do not agree with him, at least for now.

The Freedom of Worship Trap is confusing, deceptive, and dangerous to freedom. Most of all, it is against the plain meaning of the Constitution and numerous federal and state laws. People of faith must see this trap for what it is, and resist it. They must insist on their religious freedom and stop the blessings of public faith from being “boxed” and shipped out of our nation.