When Americans hear the term “court-packing,” they almost instinctively make a connection to the radical coup attempt of the U.S. Supreme Court.

While rigging the Supreme Court would indeed destroy one of America’s most venerated institutions, the far Left is also waging a two-front attack to ideologically capture the lower federal courts—a plot that could endanger the judiciary’s integrity from top to bottom and accelerate the erosion of our God-given rights and freedoms.

Dusting Off the Playbook: Using a “Crisis” to Justify Radical Change

Citing an alleged judicial “crisis” and an “overwhelmed judiciary,” Leftist judicial activists have made calls to add as many as 250 judges between the district and appeals court levels. However, official data from the U.S. Courts website shows case filings during the COVID-19 pandemic decreased by ten percent (10%) overall and criminal defendant filings dropped twenty percent (20%).

(A related, but important note: When was the last time the term “crisis” was used as a pretext to justify far-reaching action by the Left? Oh yes, when the COVID pandemic supposedly justified unconstitutional government orders restricting religious freedom, closing houses of worship nationwide and treating people of faith disparately from their secular peers).

Returning to the matter at hand, pending proposals to add four (4) seats to the Supreme Court would create a 7-6 majority of liberal-appointed justices. Though it’s a slim one-justice majority, it’s enough to effectively tip the Court in the Left’s favor and give them the numbers needed to rubber-stamp their radical agenda. 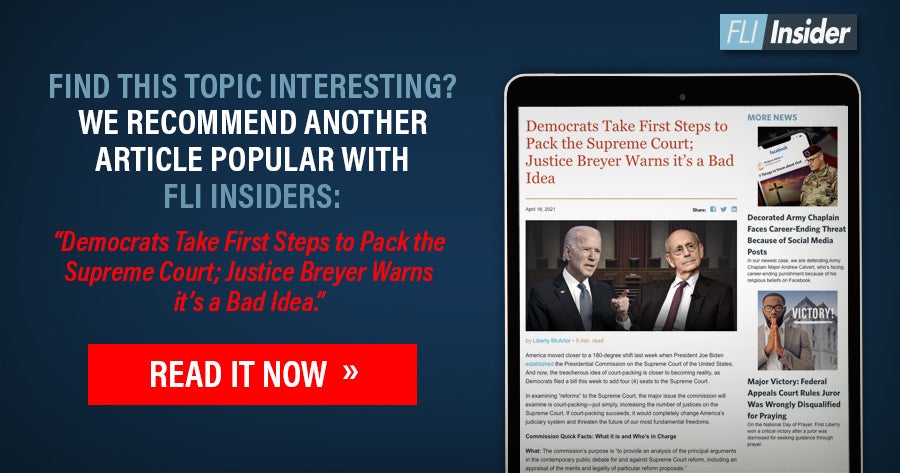 Add another 250 open seats at the district and appeals court levels, however, and the destruction of the Left’s court packing scheme would not only be widespread across the nation, but also multiplied by the hundreds.

Let’s look at the numbers. Presently, there are slightly over 375 Democrat-appointed and approximately 400 Republican-appointed judges in the federal judiciary. With 250 new judges, plus filling all current vacancies (about 75), a couple of things would likely happen:

Bottom line, packing the lower courts would give President Biden more than three times the number of vacancies to fill, and the ability to possibly install nearly thirty percent (30%) of judges on the federal judiciary.

By comparison, the Trump administration set records with over 230 judges confirmed and filling twenty-eight percent (28%) of all current active federal judges.

Is it a coincidence that the court-packing numbers proposed today would give President Biden the margins and edge he needs to surpass the record of his predecessor?

Instead of alleviating a so-called judicial crisis, stacking hundreds of lower court judges appears more an act of political revenge. Everyone who cares about the integrity of America’s judiciary should be aware that, just like adding justices to the Supreme Court, the bottom-up scheme is also a corrupt power grab with destructive consequences.

For the People Act: Court “Picking” Also a Danger to the First Amendment

Right now, Congress is considering H.R. 1, known as the “For The People Act,” a bill introduced by Democrats that threatens core First Amendment protections through the more subversive, yet dangerous tactic of court “picking.”

Essentially, court picking (as opposed to packing) is when Congress uses its authority over federal-court jurisdiction to stuff politically sensitive cases from throughout the country into one court that leans its way.

While mainly focused on election law, there’s a provision inside this 886-page behemoth bill that does precisely this. A recent Wall Street Journal op-ed explained:

“…The bill would strip 93 of 94 local federal district courts, and 11 of the 12 regional appellate courts that review their decisions, of their power to hear First Amendment challenges to congress’s regulation of political speech. All such claims…would be confined to the District of Columbia.”

In other words, the D.C. Circuit Court of Appeals—conveniently comprised of a majority of liberal-appointed judges—would be given enormous and concentrated power to interpret the First Amendment and decide political speech cases.

Coupled with the court-picking provision, the bill threatens the freedom of expression of religious organizations, faith-based nonprofits and houses of worship because it expands the definitions of what constitutes “electioneering” and political speech. And of course, if legal issues concerning political speech do arise, these cases would go directly to the Speech Czars at the D.C. Circuit.

What might appear as mundane judicial statistics or legalese concerning the lower courts actually has a profound impact on our individual liberties.

Let’s not forget that while the Supreme Court attracts the most attention, it decides less than 100 cases each year, and maybe only rules on one or two religious freedom cases annually.

The district and appellate courts are where a vast majority of legal battles are settled and where important precedent is set concerning our freedoms, including many of the religious liberty cases First Liberty litigates. (As an example, see our recent victory at the Eleventh Circuit on behalf of Corrine Brown where the trial court in her case had dismissed a juror who prayed and asked for guidance during trial deliberations).

Whether you’re starting with the Supreme Court or a local federal district court, court-packing and court-picking amount to the same thing: Brazen attempts by one political party at gaming the system so they can get the political results they want.

It’s up to us—We The People—to preserve the integrity of America’s Constitution and the world’s most revered judicial system. Will you Join First Liberty in exposing the Left’s radical coup to bring U.S. citizens under their tyrannical authority and policies?