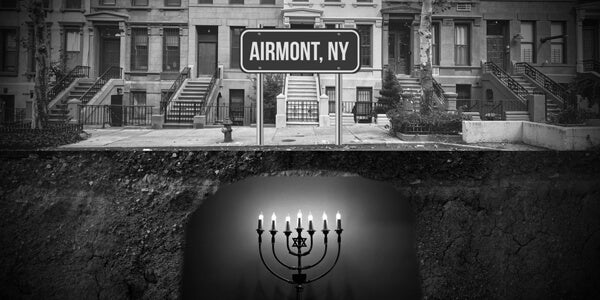 If you thought that discrimination against the Jewish community was a thing of the past…think again.

In this edition, we will be sharing with you one of the worst cases of religious discrimination that we have ever uncovered. And it may shock you to learn that it’s not happening in some remote part of the world.

For more than 30 years, village officials in Airmont, NY have forced the local Orthodox Jewish community underground. And it’s been this way since Airmont was established back in 1991.

Since then, local officials have made it all but impossible for anyone who is an Orthodox Jewish believer to live out their faith, demanding that they receive approval from the city to worship in their very own homes.

And if you’re one of those who’s brave enough to apply for approval, then you’re inevitably roped into a vicious –and virtually endless – cycle.

Here’s what you can expect: ever-increasing fines, severe delays, the “squeeze play” every time you present an application, and constant “reassessments” of the square footage of your home that’s used for worship.

In fact, a local rabbi has had to pay $40,000 in costs trying to meet the Village’s demands! (Another rabbi has been threatened with a year in jail!). And his ordeal isn’t yet finished – village officials still haven’t approved his application!

And that’s basically the game they’ve been playing for over three decades: Denying, delaying, and fatiguing…because everyone knows that in Airmont, if you want to practice your faith, you better get ready for a perpetual process of denial.

If you think that what’s happening in Airmont couldn’t happen in your city or to you…think again!

If Airmont government officials are intruding into the homes of the Orthodox Jewish community, then they could do it to just about any other American, of any faith.

Let that sink in for a minute.

Imagine if city officials or local bureaucrats have the power to tell you how much of your own home you can or cannot use for religious purposes – and on top of that, they require you to pay absurd amounts of money just so you can host a simple religious gathering, like hosting your small group.

If that doesn’t get under your skin, consider that in Airmont, they even go as far as to measure the amount of space in your house you use to shelve your Bible or other religious books.

So, that Bible study or small prayer group that you host at your house…it’s now under government control.

And anytime they want to shut you down, they could easily do it just by slapping on an extra fee of any amount, or putting you through a never-ending loop, or threatening you with jail time.

But we’ll end with a note of encouragement – and a fact:

You don’t need Airmont government officials’ approval to live out your faith in your own home. You already have all the approval you need to worship, and it’s found in the First Amendment of the U.S. Constitution.

And that’s why First Liberty is fighting for you and for those of the Orthodox Jewish community in Airmont, because no American should be forced to live their faith in hiding.

All Americans have the right to live out their faith.
No person of faith should be forced underground.