100 years later, we have not forgotten the sacrifice of the 49 Brothers of Bladensburg. In this first excerpt of an exclusive on-going series, we remember one of the most decorated military heroes of all time, U.S. Marine, First Lt. Henry Hulbert. 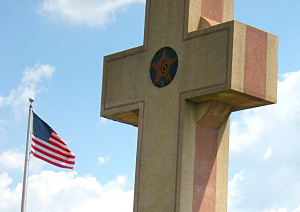 From 1914-18, America’s finest and bravest young men fought in the great “war to end all wars.”

Sadly, 100 years later, the war against our fallen heroes continues as First Liberty and the American Legion fight to save the memory and sacrifice of the “Fallen 49” honored at the Bladensburg WWI Veterans Memorial.

In this exclusive on-going Liberty Watch series, we pay tribute to these men by sharing their remarkable stories of valor, endurance, courage, and devotion – the very words engraved on their memorial gravestone, so that we may never forget their sacrifice.

Appropriately, we begin with the story of Marine First Lieutenant Henry L. Hulbert, Medal of Honor recipient and one of the most decorated soldiers in military history.

“WORTHY OF ALL HONOR AND PRAISE” 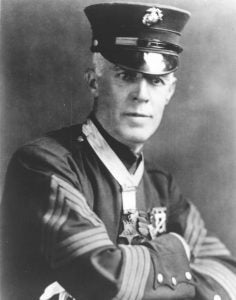 Born on January 12, 1867, Hulbert’s military career began in 1898 as a private in the U.S. Marine Corps. On April 1, barely a year after his enlistment, he was awarded the Medal of Honor for extraordinary heroism during an ambush by a numerically superior force. Despite being wounded, Hulbert fought single-handedly, delaying action while protecting two mortally wounded officers.

Under fire from three sides, Hulbert refused to give ground, and enabled the main body to establish a new defensive perimeter.

In his official report, Lt. Constantine M. Perkins, commander of Philadelphia’s Marine Guard, wrote, “His conduct throughout was worthy of all honor and praise.”

“NO ONE COULD HAVE RENDERED MORE VALUABLE SERVICE”

While serving as a gunner with the 5th Regiment, 2d Division, at Chateau-Thierry, France, Hulbert again demonstrated his metal, resolve, and propensity for self-sacrifice.

Wounded in his regiment’s first major engagement at Belleau Wood on June 6, 1918, Hulbert was twice cited in official orders for acts of bravery. On one occasion, carrying only a rifle, he launched a one-man attack against a German machine-gun position that “left seven of the enemy dead and put the remainder to flight.”

Hulbert then earned a second citation, which commended him for leading additional attacks against a series of enemy strongpoints, all while suffering painful wounds himself.

But Hulbert, a platoon leader who was old enough to be the father of most of the men he led into battle, was not finished.

A man of supernatural stamina, courage and endurance, he was decorated with the Distinguished Service Cross for his third act of heroism during the fight – thus becoming one of the very first Marines ever to be so recognized.

Army Major General Omar L. Bundy, commanding general of the 2d Division, singled out Hulbert in his official report covering the month-long fighting, “for his extraordinary heroism in leading attacks against enemy positions on June 6th.” In his report, he concluded, “No one could have rendered more valuable service than Gunner Hulbert.”

Commander Bundy was not alone in his high-praise for Hulbert.

“I should be most glad to have Gunner Hulbert under me in any capacity, and should he through good fortune be promoted over me, I should be most happy to serve under his command.”

Lieutenant W.T. Galliford, also a winner of the Distinguished Service Cross, said, “If the Fifth Regiment goes over the top, I want to go with Mister Hulbert.”

And finally, General John J. Pershing, commander of the American Expeditionary Force, personally recommended that Hulbert be commissioned as a Captain.

Gunner Hulbert was again cited for bravery during fighting at Soisson, where he was wounded yet again. For his continued acts of heroism, Hulbert was commissioned to Second Lieutenant and immediately promoted to First Lieutenant. 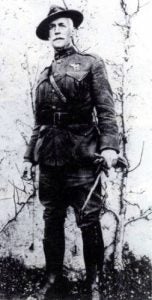 THE BLOODIEST DAY – HULBERT’S HEROISM COMES TO AN END

October 4, 1918, at Blanc Mont Ridge, Hulbert was again leading from the front, when he was struck down by an unknown German machine-gunner. He was posthumously awarded the Navy Cross and cited for bravery for a fourth time.

The French government bestowed the Croix de Guerre Order of the Army upon this “most gallant soldier.”

THE BATTLE FOR BLADENSBURG IS FAR FROM OVER

For years, First Liberty Institute has deterred attempts from a humanist group that wants to see the Bladensburg Memorial leveled and shattered to pieces.

After years of extended litigation, the battle for Bladensburg has reached the highest levels in our federal judiciary. Earlier this year, the U.S. Court of Appeals for the Fourth Circuit refused to hear the Bladensburg Memorial case en banc – by a full panel of judges of the Court. This refusal upheld a far-reaching opinion from a three-judge panel that declared the memorial unconstitutional and put it in danger of being demolished.

Despite the Fourth Circuit’s extreme ruling, the fight is not yet over. As we speak, First Liberty attorneys are preparing a petition to the Supreme Court of the United States. Appealing this case to the Supreme Court will be one of the most important offensives to preserve the Bladensburg Memorial.

And we intend on seeing this battle through to the very end because we understand that this memorial is much more than a piece of stone. The Bladensburg Memorial is a standing and tangible symbol that pays homage to the fallen heroes who gave everything to protect and defend our freedom.

It is perturbing that an extremist group would zealously seek to demolish the memorial or that a federal court would casually consider “chopping off the arms” as a viable alteration. Many of these suggestions ignore or fail to consider that the families and mothers of the fallen soldiers undertook the daunting task of erecting a monument to mirror the measure of individual devotion and sacrifice of these men.

The legacy and sacrifice of Henry Hulbert and his compatriots cannot be forgotten. We cannot allow an extremist group to erase the memory of these service members. First Liberty fights for the memorial’s preservation precisely for that reason. The Bladensburg service members already fought with passion and zeal for America, and thus it is now our turn to fight for them.