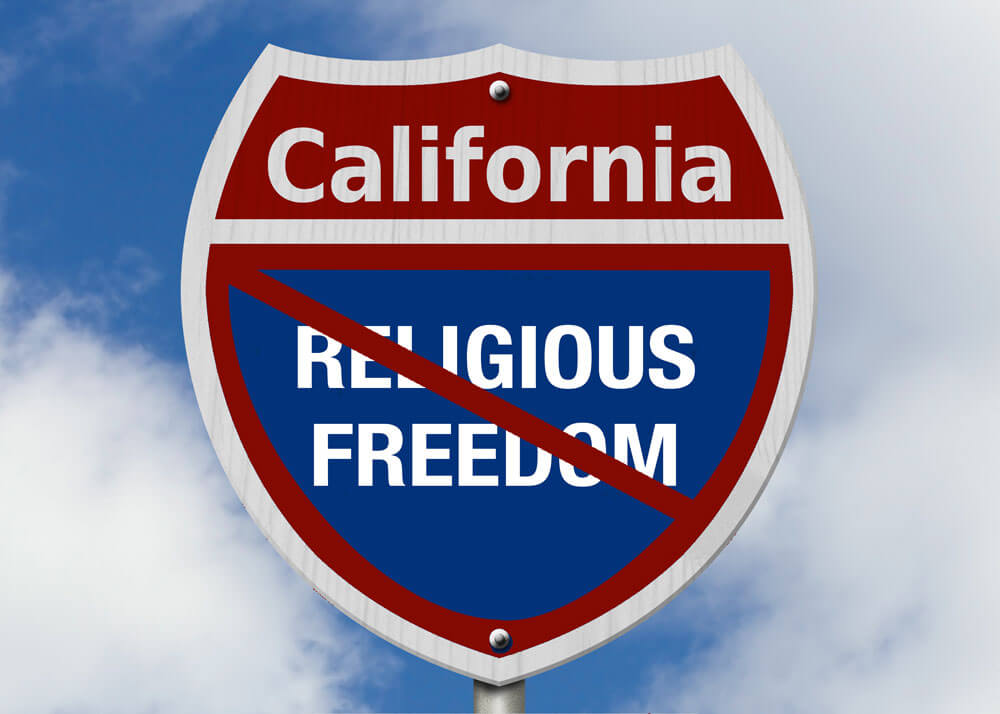 Editor’s Note: In light of the grave threat posed by the California Assembly Bill 569 as described in this article, First Liberty Institute is available to assist any California faith-based school, organization, or church who may be impacted should AB 569 become law. Don’t hesitate to contact us at (972) 941-4444 or via this link. The following article contains elements of First Liberty Counsel Stephanie Taub’s comments submitted to a committee of the California legislature regarding the severe impact to California and, indirectly, all Americans if this proposed bill becomes law.

Hundreds, if not thousands, of faith-based entities serve California’s 39 million residents, the nation’s most populous state.

Religious schools. Houses of worship. Faith-based hospitals and social services organizations of various kinds. These organizations, representing a diverse array of religions, sects, and cultures, seek to serve and support the citizens of California while adhering to millennia old tenants of their faith.

Shouldn’t protecting the ability of these entities to continue to provide invaluable service to its citizens be the utmost interest of any state?

Apparently not. Because of a discriminatory bill in the California legislature, AB 569, many of these religious entities could face the untenable choice between closing their doors and compromising their pro-life standards.

It is an irony that, in the name of inclusion, the California legislature is targeting faith-based groups because of their religious views on abortion and contraception. If the California legislature passes AB 569, the results could be devastating. AB 569 squelches the religious liberty rights of faith-based entities, potentially limiting the provision of invaluable aid and services to Californians across the state.

Specifically, AB 569 obstructs ministries’ ability to operate in accordance with their faith system by:

In other words, AB 569 would prevent a non-profit, pro-life organization—a pregnancy resource center, for example—from hiring certain employees who adhere to the organization’s sincerely held beliefs on abortion and contraception. This means any religious employer in California could face unconstitutional government discrimination simply because its beliefs on the sanctity of life conflict with the state government’s approved position.

Further, the pro-life pregnancy resource center could be forced to employ pro-abortion employees. If they don’t adhere to the law, they could face legal liability. In this way, the government unconstitutionally interferes with internal decisions that affect the faith and mission of the religious entity itself.

AB 569 is unconstitutional, violating both religion clauses of the First Amendment. The bill opens religious ministries to legal liability if they adhere to pro-life beliefs and include pro-life standards in their employees’ code of conduct requirements.

By contrast, the U.S. Supreme Court’s unanimous ruling in Hosanna-Tabor Evangelical Church v. EEOC held that both the Establishment and Free Exercise Clauses of the First Amendment “bar the government from interfering with the decision of a religious group to fire one of its ministers.” Since the passage of Title VII of the Civil Rights Act of 1964, the Religious Freedom Restoration Act, and other employment discrimination laws, courts have uniformly recognized the existence of a “ministerial exemption,” grounded in the First Amendment, that precludes government intrusion in the employment relationship between a religious institution and its ministers.

Importantly, the ministerial exemption is not limited to the head of a religious congregation. Rather, the Court broadly defines “minister” as any employee who conveys the religious message or carries out a religious entities’ mission, not limited to churches.

Thus, not only does AB 569 violate the First Amendment, it conflicts with Supreme Court and statutory precedents.

AB 569 turns this necessary religious liberty protection on its head, inserting the government directly into the relationship religious organizations have with those who carry out their mission, their employees. At the core of religious entities’ identity is the ability to associate with those who adhere to the tenants of their faith and who will faithfully profess their beliefs.

Finally, the legislation has no real bearing on secular entities. It is targeted to restrict the freedom of religious groups to choose who will carry out their missions, if those missions include pro-life values. In effect, AB 569 threatens inclusivity and diversity and jeopardizes the long-established relationship between the State of California and faith-based entities that serve their communities. AB 569 is patently unconstitutional.

It is customary in American history and tradition to protect conscientious dissenters. As noted in the First Liberty amicus brief in Stormans, Inc. v. Weisman, signed by 43 Members of Congress, federal, state, and territorial governments have enacted over 160 conscience exemptions for religious dissenters who cannot in good conscience participate in military service, capital punishment, abortion, euthanasia, and assisted suicide. In short, exceptions are not exceptional in the American experience.

AB 569 flies in the face of these rights. In an unprecedented move, the bill regulates the code of conduct of religious entities, including churches, pregnancy resource centers, and other religious organizations, prohibiting these groups from creating a community of people who share their sincerely held beliefs on these issues—cutting at the very core of their religious identities.

A THREAT TO ALL AMERICANS

It is vital for faith-based entities to be allowed to continue to operate in accordance with their sincerely held beliefs. Many of First Liberty’s clients, and other faith-based entities like them, are motivated by their religious beliefs to provide aid, food, clothing, homes, and education for the most vulnerable in our society.

Their faith-informed good works are vital to the welfare of our communities. Without legal protections, faith-based entities cannot continue to serve without risk of retribution.

AB 569 jeopardizes these vital interests by targeting faith-based employers who adhere to sincerely held religious beliefs on life and contraception, forcing them to choose between their religious beliefs and serving their communities. The result will be an increased litigation, higher social costs, and less diversity in the public square. If California passes AB 569, it will restrict invaluable aid, services and choices of its own citizens.

Because of bills like California’s AB 569, organizations of all faiths reach out to First Liberty Institute seeking legal help for religious discrimination. Faith-based entities across the country face threats of legal liability, loss of licensure, loss of funding, or government retribution because their longstanding religious beliefs are deemed incompatible with the prevailing government orthodoxy. When faced with these threats, First Liberty is here to help them with expertise that has successfully assisted others.