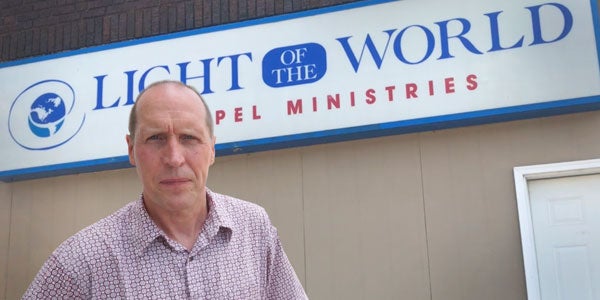 Read how ‘Pastor Paul’ of the Light of the World Gospel Ministries is fighting hard to shine the light in this crumbling Nebraska community – even though the city government is trying to stonewall him.

“No one will serve my people.”

It was that one line, those six simple words, delivered by Pat Philips – a member of an Omaha Indian Nation — that made a powerful impact on Pastor Paul just over a decade ago.

So much so, that he packed up his entire family of five from Northern Ireland and moved them to the tiny remote town of Walthill, Nebraska.

Yes, you read that correctly. Pastor Paul Malcomson – a former Northern Ireland police officer – traveled across the Atlantic Ocean to live in this crumbling village seemingly in the middle of nowhere (Where’s Walthill?), which has a population of about 800 people.

At that time, Pastor Paul had no church. And no financial support. All he did have was a huge heart, plus the vision and mission to serve this struggling community.

Just a few months after arriving, Pastor Paul founded Light of the World Gospel Ministries – now a growing, vibrant, and multi-ethnic church wanting to serve its community and renew several of the town’s run-down properties.

But for all the hope and vigor alive within Pastor Paul and his church, the village government has engaged in discriminatory actions and made it almost impossible for them to continue serving their community.

Shortly after buying a small building on Main Street, Light of the World rapidly outgrew its space and purchased additional property directly across the street to build a new facility for worship and ministry – which desperately needs restoration.

Apart from one of its only “thriving” businesses — the Lucky 77 Casino — Walthill’s downtown district features a series of boarded storefronts, shattered glass windows, and decaying buildings.

In Pastor Paul’s own words, “Walthill is known more for what it doesn’t have, rather than what it has.”

Light of the World has been nothing but compliant and cooperative with local officials. And even though Pastor Paul and his church members have expressed a willingness to rebuild and revitalize many of these crumbling structures, the Walthill village government is bending over backwards to prevent them from breathing life back into their community.

In fact, one of the most pressing issues for the church is a dangling wall from an adjacent building that could collapse onto the church’s current property at any moment. Despite the imminent danger of that structure, however, the city has denied and revoked various building permits for the church.

For that reason, First Liberty attorneys are working to ensure that Pastor Paul and Light of the World can continue to minister to their neighbors, and invest and renovate their village. We recently filed a lawsuit against the village, arguing that its actions violate state and federal laws. After all, the First Amendment and federal law protect the right of churches to operate free from unreasonable and intrusive government interference.

We will work arduously to remind the village government of the law and the Constitution – and prompt them to stop this blatant religious discrimination.

Thoughts? Comments? Suggestions?
Please let us know how you feel about this article at FirstThought@firstliberty.org