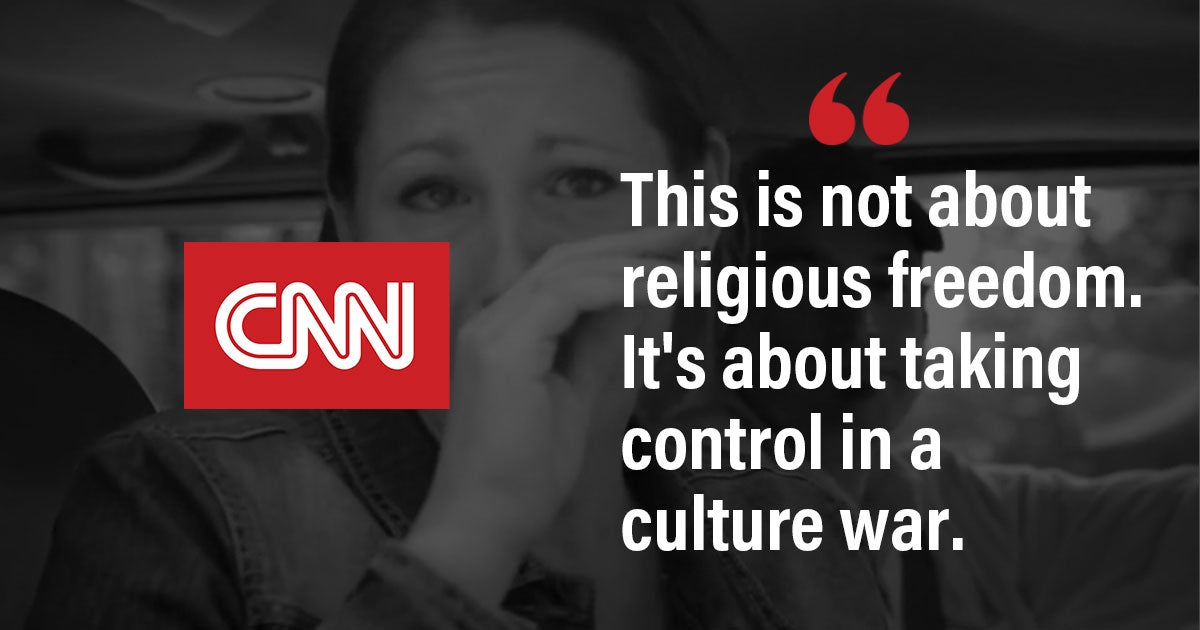 Readers of FLI Insider are likely more aware than most of the legal battles being waged across the country to preserve the right of every American, no matter their faith tradition, to live according to their most sacred beliefs. Still, the cultural aspect of preserving this foundational principle provides the context in which the legal arguments take place.

The culture is the “national conversation” on the subject. A recent opinion piece on the CNN website provided a perfect example of the cultural landscape upon which defenders of religious liberty must do battle.

The author begins by highlighting some churches’ efforts to begin reopening under safety guidelines related to COVID-19 citing First Amendment grounds, but quickly pivots to make his real point:

… the legal advocacy groups arguing the cases challenging stay-at-home orders on religious grounds are the same ones that have waged a so-called religious freedom war against the LGBTQ community.”

There is nothing wrong with this argument that can’t be sufficiently described with the word: “everything.” However, it is rare enough that one is provided with such a microcosm of the opposition’s viewpoint that to dismiss it pithily would be a missed opportunity.

To begin with the description of religious liberty as a “license” to do anything is illustrative of a fundamental misunderstanding of rights.

A license is granted by government. It is an indication of the government’s permission to engage in the licensed activity, which can just as easily be revoked.

As First Liberty Institute declares often and any study of our nation’s founding confirms, religious liberty is a God-given right and the purpose of government is the protection of God-given rights. Licenses may be temporarily suspended, such as in a public health crisis; rights are as eternal as their Grantor and may not be suspended.

Next, the use of religious freedom to deny women “reproductive health care” or to wage war against the LGBTQ community is a claim as factually inaccurate as it is legally ineffective. To support this notion, the author cites the U.S. Supreme Court’s decisions in the Hobby Lobby and Masterpiece Cakeshop cases.

The family owners of Hobby Lobby didn’t deny contraception to anyone; they just didn’t pay for it. The Court recognized the family’s right to live according to their deeply held convictions including how they operated the business. Contraception remained as available to Hobby Lobby employees after the decision as it had been before whereas a ruling in the opposite would not have left religious liberty similarly situated.

The only “war” Jack Phillips ever waged in Masterpiece Cakeshop was defending himself against the State of Colorado who brought to bear the full power of the state to force the baker and small business owner to participate in a wedding contrary to his religious beliefs. Moreover, the only discrimination in the case, according to the U.S. Supreme Court, was by the state of Colorado against the religious beliefs of Jack Phillips.

First Liberty client Melissa Klein is currently in the same defensive posture in the state of Washington and has seen her bakery closed as a casualty of the government’s war on dissent from cultural orthodoxy.

The CNN piece then takes a temporary departure from specious legal claims to disparage those whose outlook adheres to the text and intent of the First Amendment as out of touch with religious Americans, citing a recent poll as evidence. While the poll may contribute to the author’s already robust sense of moral superiority, it is in no way relevant to any discussion of constitutional rights.

The Constitution and Bill of Rights were drafted with the specific intent of protecting our rights from the fickle whims of popular opinion. In a republic where those who wield power do so only with the consent of the governed, freedom is never safer than when those who hold beliefs contrary to the majority are protected by the very government put in power by the majority.

The original title of the article (which the editors appear to have changed since they first published it) is ironically the only part that enjoys even a hint of accuracy: “Distorting religious freedom will put people in danger.” Exactly. When our culture accepts such blatant distortions of religious liberty as appear in this screed, it is easy to see where the threats of violence against First Liberty clients like Melissa Klein come from. Distorting religious freedom is why churches merely seeking to open again under safety precautions get hundreds of hate-filled calls and threats.

If culture is our ongoing national conversation, we must be as vigilant to confront fallacious characterizations of our beliefs in the court of public opinion as we are in our courts of law. With your help, First Liberty Institute will continue the defense on all fronts.