Coach Kennedy: The Courage of an Unsung Hero 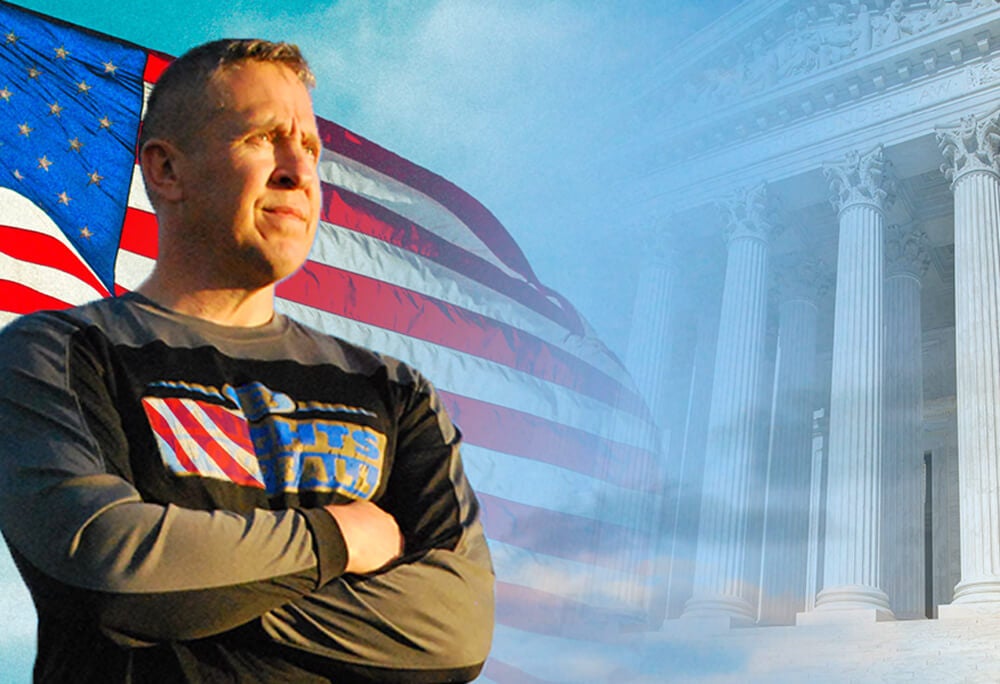 As First Liberty attorneys prepare to file a petition to the U.S. Supreme Court, we recognize Coach Kennedy for “sticking to his guns” and courageously standing by his religious beliefs.

In America today, it’s no small feat to stand up for your faith.

And if there is someone who deserves recognition for taking a courageous stand for one’s faith, it is First Liberty’s client, Coach Joe Kennedy, who was fired from his job as a high school football coach because he kneeled to pray on the field after games.

Coach Kennedy and millions of people of faith are facing some of the most hostile times in our nation’s history, especially amidst the amassing waves of censorship and radical opponents who are determined to silence religious expression.

In recent years, hostility hasn’t just come in the form of public scorn, disparaging statements, or social ridicule. Now, hostility to religion is manifesting in very tangible ways, often with life-altering consequences for those who choose to practice their faith. Many times, people of faith like Coach Kennedy have risked losing everything because they chose to live and stood firmly by their religious convictions.

But Coach Kennedy is no stranger to conflict or difficulty. As a retired U.S. Marine, he knows exactly what it takes to endure through difficult circumstances with courage and valor.

And now the long legal battle that Coach Kennedy has endured will be facing its most critical challenge. Within a few weeks, First Liberty is set to file an appeal on his case to the Supreme Court of the United States, asking the nation’s highest judicial body to restore his constitutional rights.

When Coach Kennedy prayed on the field after games, he did so knowing that he had constitutional right under the First Amendment to openly express his faith. In fact, he exercised that right for nearly 7 years without complaint, taking a knee week after week.

But why did he kneel to pray in the first place? He did what millions of other Americans do on a daily basis. Like other people of faith, his silent prayer was a way of holding true to his religious beliefs. It was his way fulfilling a personal promise he’d made to thank God for the opportunity of being a coach and mentoring young student athletes.

Thus, when he was fired from his job, Coach Kennedy not only lost his job, but one of the most important means through which he practiced and expressed his faith.

Today, it has been three years since Coach Kennedy was fired. In that time, he’s endured and met the struggle of arduous litigation with so much dignity that it is worthwhile to give him accolades for the example that he sets and for his heroic persistence.

First in the Fight for Millions of America’s Unsung Heroes

First Liberty attorneys dedicate themselves to restoring and protecting the religious liberty of Americans like Coach Kennedy because we know the courage and strife that comes along with standing up for your faith.

Today, we are increasingly seeing how opponents continue to attack religious liberty in our nation’s schools, military, public institutions, and the public arena. They are creating a culture in which mockery and penalization of people of faith is becoming a normal occurrence. “Sticking to your guns” and living according to your religious beliefs often carries the stigma of bigotry from anti-religious freedom opponents.

At First Liberty, we’ve seen the sacrifice that many Americans have made because their faith is central to their life. As we continue to represent more and more people of faith, we see their courage, commitment, and tenacity not only in standing up for their beliefs, but also for the rights of millions of other Americans who deeply cherish religious liberty.