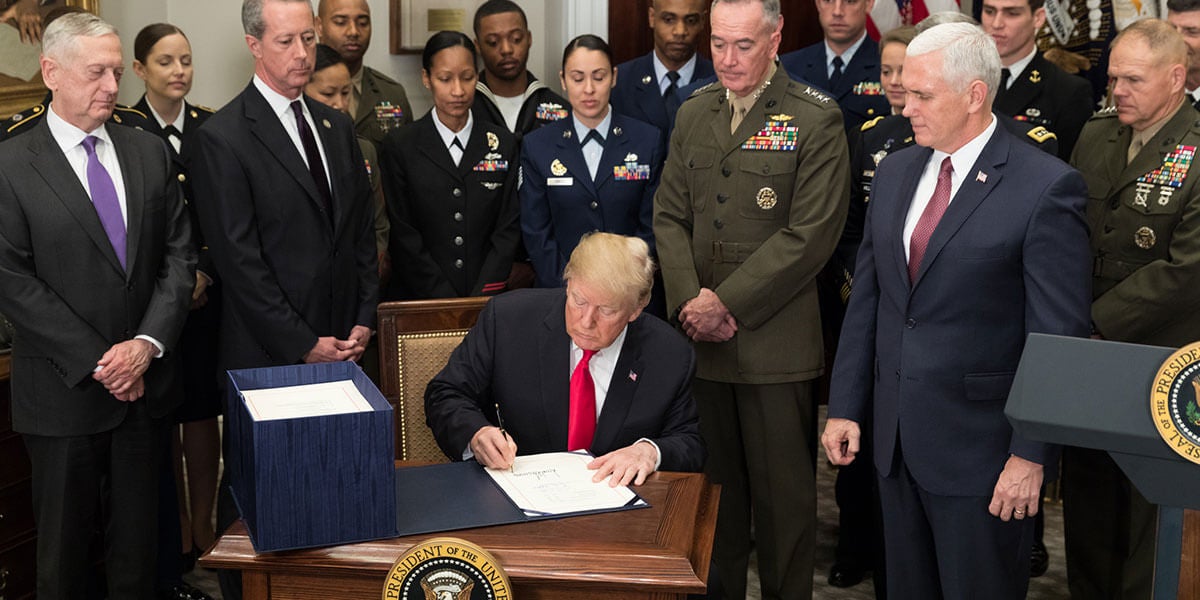 As a U.S. Marine and current Director of Military Affairs at First Liberty Institute, Mike Berry is more than familiar with the term “covering your six.” As a veteran who served in Afghanistan a decade ago, the understanding between him and his buddies was clear: I’ve got your back.

Which brings us to President Trump.

Earlier this month, the president signed an executive order to ensure that the faith-based and community organizations that form the bedrock of our society have strong advocates in the White House and throughout the Federal Government. The president’s most recent action complements his first executive order on religious freedom, which he signed approximately one year ago.

With this in mind, Liberty Watch sat down with Berry to get his insight on the potential impact on Americans and the U.S. military in particular.

1. Why are President Trump’s executive orders significant, especially for people of faith in America? How do they help protect and restore religious freedom?

MB: “Americans of all faiths benefit from the White House taking action or implementing new initiatives that allow religious individuals and organizations to thrive. These executive actions show us that the president is aware of the federal laws that protect religious liberty. Now, he is taking the issue a step further because he recognizes there may be agencies or departments in the Executive Branch that may not be complying with those laws.”

2. As an attorney – and a veteran – who works to defend the religious liberty rights of fellow service members, how will these actions impact religious freedom in the U.S. military?

MB: “They essentially tell Americans that the president is making religious freedom a priority within his administration. For instance, one of the key provisions in these executive actions states that the Attorney General must be notified if any executive agency – including the Department of Defense – fails to comply with federal laws protecting religious liberty.

For one, this means that the highest judicial official in the country will be aware of religious liberty infringements. It also gives Americans assurance that religious freedom issues could potentially be on the President’s radar. The consequences of this are profound. It will allow people of faith within the military, for example, to practice their beliefs without fear of reprisal or reprimand, because they know that there is a measure of accountability from the highest offices.”

3. Looking at the current situation in the military and the ongoing violations to service members’ religious freedom, where do you see this trend headed in the next 5 years?

MB: “Based on the actions from the President, it is becoming clear that we are in a phase of awareness. National leaders are aware that there are religious liberty violations happening. And that’s the first step in finding a solution: acknowledging there is a problem. These executive actions come at time when there is much need to recognize that religious freedom is under attack.

Because these executive orders are so recent, it will take time for major changes to occur inside the military. Nonetheless, acknowledging the issues is a positive indication that the military will develop and implement rules to comply with federal laws and protect religious liberty.”

Do you know someone in the military?
Would they know their rights?