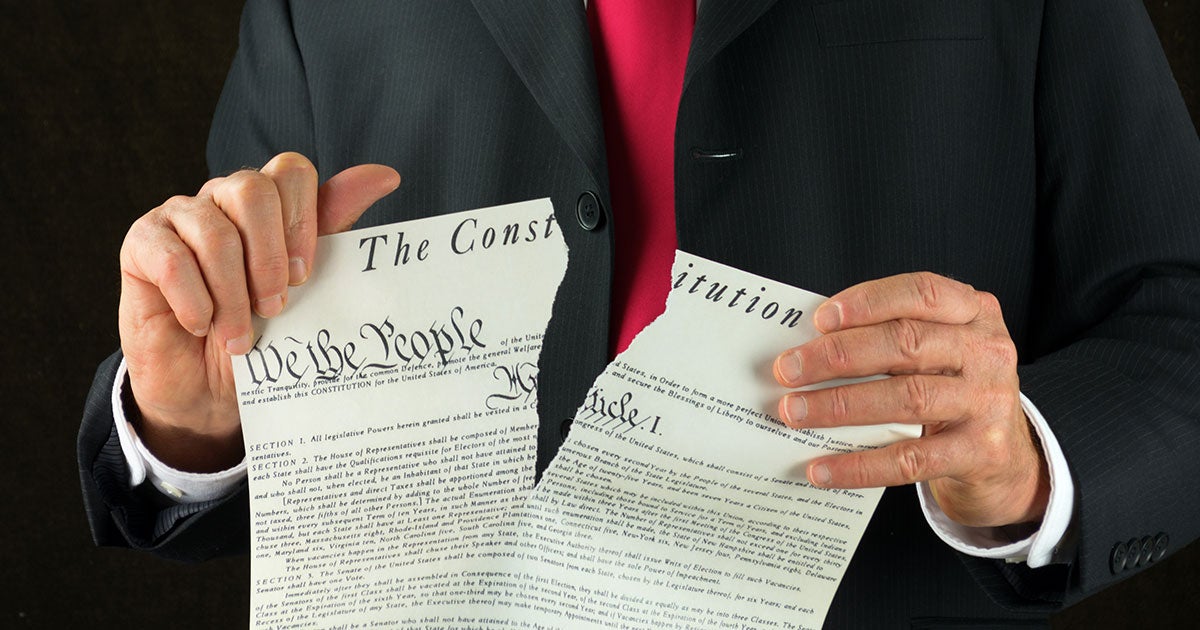 The greatest threat to America is not the COVID-19 virus.

We don’t dismiss the deadliness of a rapidly spreading illness. However, the virus itself isn’t the most pressing threat to the fabric or the foundations of our country.

The most imminent danger to our republic is the overreach of government power, especially during a crisis. Our nation faces a fatal risk when government takes actions that violate our fundamental freedoms, leading us down the road of tyranny, to the erosion of our constitutional system.

When we survey the landscape of stay-at-home orders and restrictions imposed during the last several weeks, we see officials in numerous states abusing their authority to severely cut back freedoms, as they don’t want to let “a good crisis go to waste.”

Nowhere has this been more apparent than in the burdensome policies, bigotry and discrimination directed against America’s houses of worship and religious communities.

Churches and people of faith nationwide have largely shown love for their neighbor, complied with health guidelines, gone the extra mile to adapt their religious services and continued serving communities as their faith teaches. Even still, relentless and outrageous violations of their religious freedom are constantly launched against them.

What does this say about the state of our nation?

One thing is increasingly clear. The attacks on our First Freedom during the health crisis are a warning sign that America is facing a constitutional crisis.

The first indication that the Constitution is in deep trouble comes from data showing that most Americans think it’s okay to maintain ongoing limitations on religious liberty.

A recent University of Chicago Divinity School / Associated Press poll reported that 42% of Americans think in-person religious services should be allowed with restrictions, and 48% think they should not be allowed at all.

That’s half of Americans who believe churches should be banned from meeting, even if they follow the same restrictions and all safety protocols as businesses, retail, liquor and other stores which are allowed to be open. That’s pure discrimination.

Let’s ask ourselves a difficult question: Have we elevated commercial activity so high on our list of “essential services” and downgraded religious freedom to second tier, or even further down the list?

Are we at a point now when we’re categorizing this First Freedom as “non-essential?”

This reveals something deeply concerning about our understanding of basic constitutional freedoms.

It’s almost as if religious freedom—including the inalienable right to exercise one’s beliefs by attending church—has become just like any other casual lifestyle choice. By the looks of it, many in positions of authority and a majority of Americans think this right is just a hobby we can push down the list, like going to a baseball game, or to a concert with friends.

There’s a reason why our Founders fought to ensure that religious freedom held a special (and first) place in the Constitution. They understood that people of faith and churches were essential to the fabric of our society, and therefore it was necessary to restrain government power, so that religious communities could freely live out their faith as well as contribute to the flourishing of our country.

Today, even if many state governors or local officials say otherwise, religious services and religious freedom are still indeed “life-sustaining” and essential. They are a lifeblood for millions in times of national crisis or distress.

It’s worth reminding those officials who relegate religious freedom and the religious community to second tier of a blunt truth: Religious freedom has been essential since the Constitution was drafted, and today it still is the primary and most essential of our liberties.

Here’s the bottom line: If “We the People” forget, willfully ignore or downgrade religious liberty from being first on the list of freedoms listed in the Constitution, then it’s a sign we’re in a constitutional crisis.

Another clear and present threat to our constitutional system is seen when governors and local officials across several states think they can override or run roughshod over the religious freedoms of Americans.

First Liberty intervened against this attack on religious freedom, seeking a temporary restraining order on behalf of our client, Joshua Freed, who wanted to hold a one-on-one Bible study in his home while adhering to CDC guidelines. Thanks to our involvement, Gov. Inslee backed down and Mr. Freed can have a one-on-one Bible study, and the Governor will not enforce the rules against home Bible studies on a one-on-one basis.

In Kentucky, First Liberty had to fight on behalf of churches prevented by Gov. Andy Beshear’s executive order from holding CDC-compliant religious services, a policy that even threatened them with criminal penalties. In that state, First Liberty won two seminal victories reclaiming the rights of churches to hold both drive-in and safe, in-person services.

Or take a look at the fact that in Chicago, Illinois police recently fined several churches for hosting in-person services. The situation in that state was so bad that Gov. J.B. Pritzker at one point announced he would demand places of worship keep their doors closed until a vaccine is developed (whenever that is!), despite their “over-compliance” with health regulations.

Over the course of the pandemic, there’s been no shortage of government leaders abusing their power and trampling on the Constitution by singling out and discriminating against people of faith and churches.

The Constitution is designed to protect religious institutions, so that no governor, state or local official arbitrarily singles out religious activities for restrictions that do not apply to other areas of life. But as we see from the examples above (as well as many more not mentioned here), some in positions of authority don’t really grasp the Constitution’s protection of religious freedom.

Terrible mismanagement of religious liberty at the state and local level is alarming because it poses a threat to our constitutional system, indeed to the political health of our republic.

Think of it this way. We have a constitutional crisis when governors or municipal leaders put themselves above the Supreme Law of the Land (Constitution)—like when they make policies that directly violate the First Amendment’s protection of religious freedom.

There’s a big lesson to learn here: The health crisis has brought to the forefront the reality of a constitutional crisis, a crisis caused by an impending threat of government interfering with our God-given liberties.

Right now, First Liberty is fighting for and reclaiming the First Amendment freedoms of religious communities nationwide. Protecting religious liberty is essential in this critical time, and it’s the first step in making sure we preserve America’s precious and unique constitutional system.