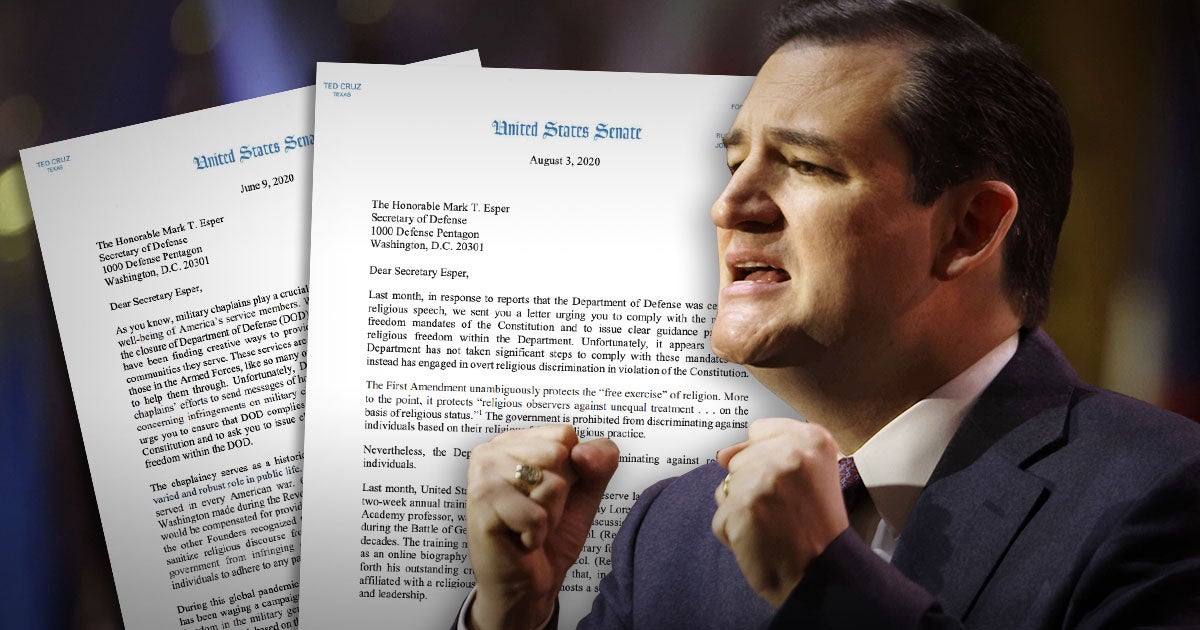 On Capitol Hill, U.S. Senator Ted Cruz (R-TX) is doubling down in his effort to protect religious freedom for our military service members. He recently sent a second letter to U.S. Secretary of Defense (DOD) Mark Esper, accusing some Pentagon officials of fostering a culture of hostility towards religion.

In his letter, Sen. Cruz calls out the deep-seated hostility that’s on display against people of faith who serve our country in uniform, stating:

Sen. Cruz’s most recent action was prompted by an incident of overt intolerance that happened just a few weeks ago, after the U.S. Marine Corps decided to remove a speaker from a training session simply because of his Christian beliefs and background.

If you recall, Jay Lorenzen—a U.S. Air Force veteran and 35-year member of Campus Crusade for Christ’s (CRU) Military Ministry—was set to speak at an annual training for Judge Advocate General (JAG) reservists. However, the deceptively-named Military Religious Freedom Foundation (MRFF) complained to the U.S. Marine Corps, who then proceeded to cancel Lorenzen because of his faith.

The MRFF not only celebrated the fact that it was able to “cancel” Lorenzen’s training appearance in just 64 minutes, but even suggested that Lorenzen and those who invited him to speak should be “visibly” punished, despite the fact that he was speaking about battlefield leadership, and not religion, during his session!

Give today and become a FORCE MULTIPLIER to reclaim faith and religious liberty for our heroes in uniform.

Only a few days later, he sent an initial letter to the DOD in response to the MRFF’s wave of attacks directed against military chaplains, who’ve continued to fulfill their duty by providing spiritual guidance to troops during the uncertainty and difficulty of the pandemic.

Not only did Sen. Cruz make it clear that chaplains are essential to the spiritual fitness of America’s troops, but also that the DOD has a constitutional responsibility to protect religious freedom:

Additionally, as government officials continue to abuse their power and attack the liberties of churches all across the country, Sen. Cruz recently authored a bill to block federal funding from governments engaging in religious discrimination. This bill, called the Safeguarding Americans from Coronavirus and Religious Exercise Discrimination (SACRED) Act, would block federal relief aid to state and local governments that discriminate against religious individuals or institutions.

The legislation comes at a critical time, as the U.S. Supreme Court’s recently rejected an emergency request from a Nevada church who sought to be exempt from a discriminatory state policy that limited attendance to 50 worshipers, while casinos and movie theaters were allowed to operate at 50 percent capacity.

There’s no denying it. This is a watershed moment for the future of religious liberty in America. Radical groups like the MRFF as well as abusive government officials have revealed their true colors, exploiting a vulnerable moment to trample on Americans’ most fundamental and cherished freedoms.

Now, more than ever, we must respond to this crisis with character, standing strong together in defense of religious freedom and the Constitution, so that our children and grandchildren get to experience the same liberties we enjoy today.

Through your faithful and continued support, YOU can be a Force Multiplier for our brave military members. Your generous financial gifts will help provide First Liberty’s Mike Berry (Lr. Col. USMCR) and his “troops” the resources necessary to continue to fight for religious freedom for our men and women in uniform.