Pres. Trump’s Nominee for the DC Circuit: Another Strong Protector of Religious Liberty 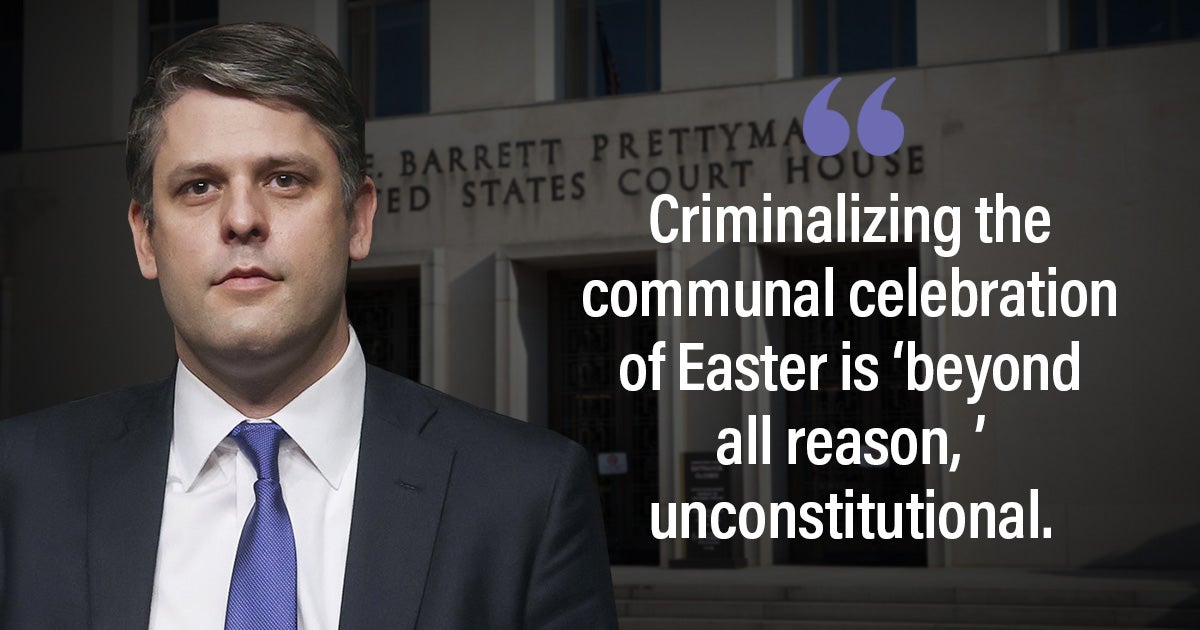 After a temporary hiatus caused by the coronavirus epidemic, the U.S. Senate recently returned to Capitol Hill and almost immediately resumed the consideration of judicial nominees for the federal bench.

Recently, Judge Justin Walker—who currently serves on the U.S. District Court for the Western District of Kentucky—appeared for consideration before the Senate Judiciary Committee.

You may recall that Judge Walker was recently nominated by the president to fill the important vacancy created on the U.S. Court of Appeals for the D.C. Circuit, often referred to as “the nation’s second most important court” after the U.S. Supreme Court.

If confirmed, Judge Walker would become the record-setting 52nd nominee appointed by the president to the nation’s circuit courts. Additionally, his confirmation would mean nearly 30% of appellate judges have been appointed under the current administration.

Of course, Judge Walker’s pending nomination is also especially important for millions of Americans because his record reflects a strong commitment to the Constitution and religious freedom.

In fact, just a little over a month ago during Holy Week, Judge Walker issued a precedent-setting decision in an important religious freedom case: On Fire Christian Church v. Fischer.

During a time of pandemic and great uncertainty about whether our constitutional system was still intact, Judge Walker entered a Temporary Restraining Order that stopped the City of Louisville, Kentucky from banning drive-in religious services under the auspices of a stay-at-home order.

With that decision, Judge Walker not only demonstrated his fidelity to the First Amendment, but also helped to restore confidence in our constitutional system and the rule of law at a critical time in our nation’s history.

In the last 50 years, President Carter holds the highest number of judges (59) appointed to the circuit courts during a president’s first four years. Also, the Carter administration reached a record-high total of 261 confirmations (including both circuit and district courts).

For perspective, the chart below gives a recent update of how confirmations under the current president compare to previous administrations: 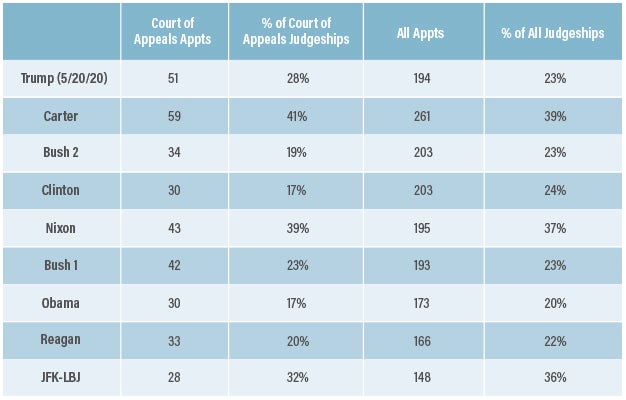 The question is: Will the Trump administration surpass Carter’s numbers, with less than a year remaining in its first term?

That depends largely on three things: the number of vacancies, how many nominees the president puts forth and whether the Senate can move quickly to confirm them.

When we look at the circuit courts, there are two (2) Trump nominees pending (Judge Walker to the DC Circuit, and Cory T. Wilson to the Fifth Circuit). If confirmed, it would bring his total to 53, putting him 6 confirmations short of Carter’s 59. But there are currently no other circuit courts vacancies for the president to fill.

Any future vacancy depends on whether federal appellate judges eligible to retire on “senior status” will do so. Close to 40 of those eligible judges are liberal-appointed, and close to 30 are conservative-appointed.

However, there’s a higher possibility that President Trump can surpass the total number of confirmations (including both circuit and district courts). With over 190 confirmations at the moment, he needs just slightly more than 65 judges confirmed to meet Carter’s record (261). And with over 70 vacancies across the district courts, this is a scenario that’s within reach.

It’s important to reiterate that those nominated for lifetime judgeships on our federal courts can have tremendous influence on our Constitutional freedoms—especially our freedom to live out our faith.

Right now, First Liberty is fighting religious freedom cases at the federal level through what could be a tipping point for our nation and our constitutional system. And now more than ever, it’s imperative for America to grow its “bench strength” with nominees (like Judge Walker) who will uphold religious freedom and follow the Constitution as the Founders intended.

* Stats and data courtesy of the Brookings Institution.