Why It’s Time to End “The Lemon Test” 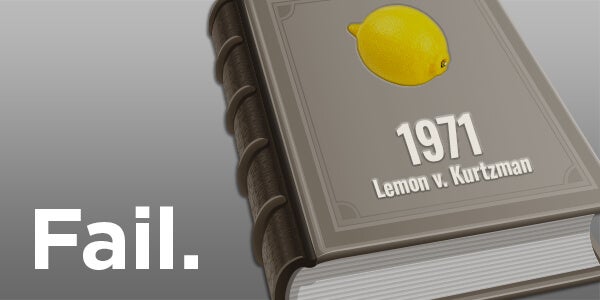 If you’re a First Liberty Insider, you’re no doubt familiar with the Bladensburg WWI Veterans Memorial, a 93-year-old veterans memorial that’s on the brink of demolition after an appeals court ruled it unconstitutional.

On February 27th, our legal team was at the the U.S. Supreme Court for the final showdown, presenting oral arguments to the nine Justices in defense of the memorial.

The High Court’s ruling could decide whether or not the memorial will continue to stand in honor of 49 fallen WWI veterans of Prince George’s County, MD.

This case is about saving AND making history. A chance to reverse decades of bad judicial precedent: the “lemon doctrine.”

Since 1971 – for almost half a century – courts have used the “Lemon,” or “endorsement” test, to determine whether the government has endorsed or established a religion by allowing public displays that may have some religious imagery. And that test is precisely what’s put many of our nation’s war memorials in the cross-hairs and under impending threat of desecration or destruction.

Why exactly is this test so bad?

In short, the Lemon test essentially gives the upper hand to feelings, rather than solid legal argument.

That kind of legal doctrine is what prompts people to flood the system with lawsuits simply because a monument or display personally offends someone’s “feelings.” Of course, what’s not taken into consideration is the heartbreak of the people who built the memorials in the first place – like the Gold Star Mothers and The American Legion, who built the Bladensburg Memorial in honor of their fallen sons and brethren.

Beyond that, the Lemon test has also caused so much confusion that government officials – especially local officials – are left unsure about what the law is when it comes to displays with religious imagery. So by default, the government ends up shutting down displays with religious imagery altogether – the kind of thing that the Founders would be appalled by.

Right now, however, we have a prime opportunity to oust the Lemon test and return to the original interpretation of the Constitution.

The Test That Keeps on Failing

If you still need more evidence that the Lemon test is bad judicial doctrine, take just a minute to ponder what the late Justice Antonin Scalia wrote in 1993.

In his formal legal opinion, Justice Scalia expressed the following in regards to the inadequacy of the U.S. Supreme Court’s 1971 decision in Lemon v Kurtzman:

“Like some ghoul in a late night horror movie that repeatedly sits up in its grave and shuffles abroad, after being repeatedly killed and buried, Lemon stalks our Establishment Clause jurisprudence once again, frightening the little children and school attorneys.”

Now that’s a rather colorful criticism, wouldn’t you say?

But this isn’t just an impulsive or capricious criticism. On the contrary, it is based on a sound, textual understanding of the First Amendment to the U.S. Constitution, which was designed to stop the government from interfering with your God-given right to practice your faith.

It was never meant to exclude religion from the public eye.

Today, fickle and subjective legal precedents like the Lemon test have allowed anti-religion interest groups to basically use the First Amendment as a weapon to sanitize the public square of all traces of religion.

That’s precisely why the Lemon test is no longer viable – and why we’re arguing in the Bladensburg Memorial case that this outdated legal standard has got to go.