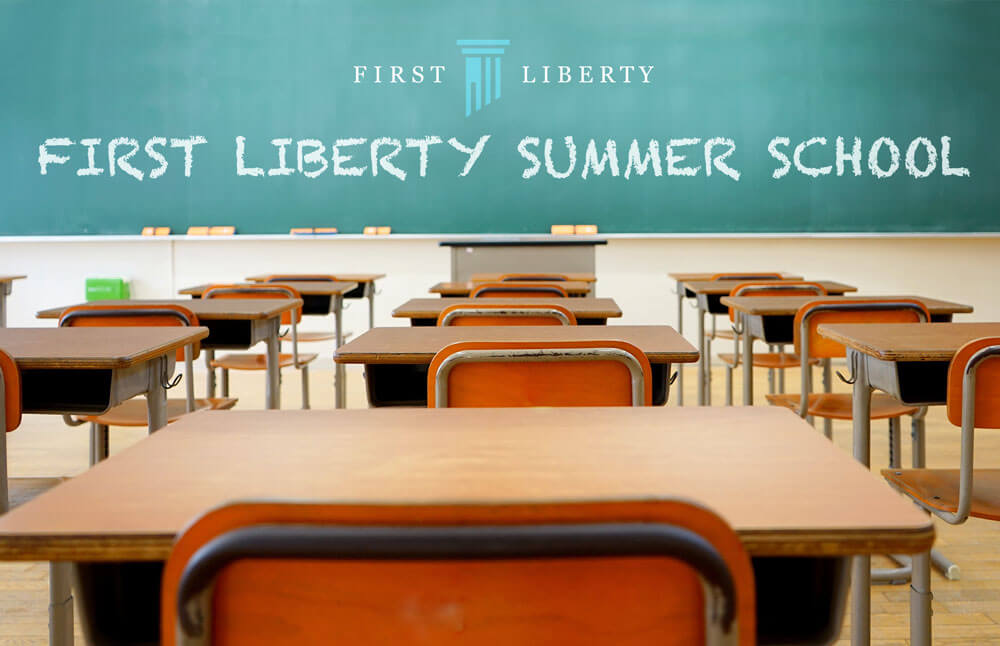 Ahh, freedom. A term that goes hand in hand with summer.

Let’s face it, as Americans, the word freedom runs deep within our DNA. It rolls off our lips, often without much thought. But do we take it – along with our history – for granted?

This begs the even bigger question: what makes freedom possible?

If you had to choose three factors that make freedom a reality, which ones would you choose?

Without a doubt, it’s not an easy question to answer. Fortunately, our history is replete with lessons and insight on what it takes to protect freedom, especially from America’s Founding Fathers.

Let’s take a short trip back to our Founding Era and see how America’s pioneers can influence us as we fight on the frontlines for religious liberty.

At the end of the American Revolution, the Continental Congress faced financial woes. Many disgruntled revolutionary soldiers didn’t think they were going to be paid. They began contemplating whether this new country would be better off with a monarchy.

What a sigh of relief that Washington refused to take on the title.

Why would an individual turn down that sort of power?

The dangers of monarchial tyranny weren’t lost on Washington, considering he and the American revolutionary troops had just won a battle for freedom from an oppressive monarchy, and he was not about to return this new country into the hands of such a system.

Washington’s refusal, in essence, had much to do with two distinctive traits: character and virtue.

Washington – as did many of the other founders – understood that liberty comes from more than just laws and regulations. They come from virtuous citizens. Specifically, freedom thrives when citizens’ character is influenced by virtue. Combined, these traits provide the self-restraint that counterbalances the social risks of giving people liberty.

In our country today, many religious freedom opponents have deceived Americans by telling that religion and government cannot be combined in any way whatsoever.

But looking back on the origins of our nation, we see that even the Founders with the least affinity to religion believed differently.

Benjamin Franklin, for example, acknowledged that religion had a central role in developing citizens’ morality. And Franklin didn’t just pay lip service to this idea. He lived it. In fact, it was Franklin who initiated prayer during a crisis moment in the Constitutional Convention.

Similarly, Thomas Jefferson – arguably one of the least religious of the founders – was clear that without faith there is very little reason to be virtuous. The Jefferson Memorial itself displays famous quotes by Jefferson connecting freedom to the moral laws of God.

Many of America’s Founding Fathers recognized that faith was a foundation from which citizens and leaders could draw virtue and character. Of course, we are not suggesting that irreligious people are not virtuous; many are. But it does mean that on the whole, a society without the freedom to exercise their faith will not have the ability to pursue virtue. And because of the religious freedom that is enshrined in the First Amendment, citizens are able to seek after virtue, morality, and character.

Taking What We’ve Learned to the Front Lines

Americans today usually associate the value of freedom with military service members’ sacrifice. And while that is indeed a large component of what makes freedom possible, we cannot forget that we as citizens also have a significant stake in preserving liberty.

Today, the amassing waves of attacks against religious liberty are much more than a cause for concern. They are a threat to the most foundational rights and bedrocks of our society. Hostility to religion – and religious liberty in particular – in today’s culture now manifests in punishment and discrimination against people of faith who practice and live according to their religious convictions.

These hostile trends are a direct affront to the values and the freedom on which America was founded. They run amiss and contradict what many of the Founding Fathers intended when they crafted the Constitution and the rights enumerated in the First Amendment.

At this critical juncture in our nation’s history, First Liberty is taking on the task of defending religious liberty with more fervor than ever before. It’s why we will continue to be first in the fight when the opposition seeks to trample on America’s first freedom.

But it doesn’t end with us. This is a crucial opportunity for American citizens and lovers of freedom to join First Liberty in that fight. If we are to continue pursuing virtue, character, and morality, then we must be willing to go to the front lines in defense of our first and most foundational freedom – religious liberty.