In a case potentially headed for the Supreme Court, the full Sixth Circuit reviews panel’s ruling against commissioners’ invocations. 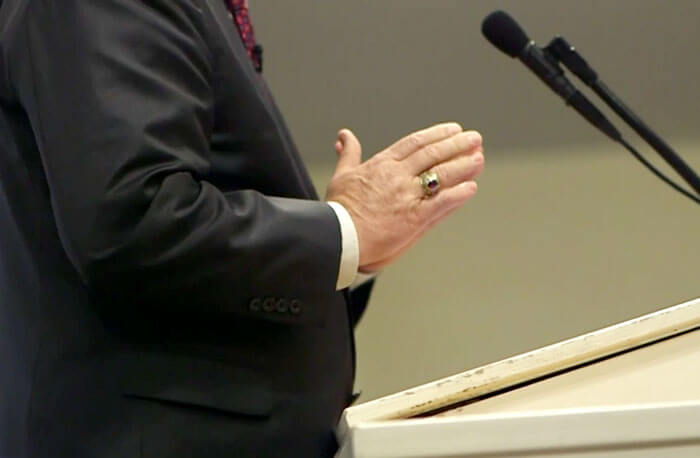 Legislative invocations have a long American tradition and heritage. Despite court challenges, the Supreme Court has upheld this practice twice in the past few decades—once in 1983 and again in 2014.

However, depending on the rulings of two en banc federal appellate courts in similar cases in different parts of the country—two cases where First Liberty is representing government officials who want the right to continue invocations—the issue could soon be headed back to the Supreme Court.

One of these cases is Bormuth v. County of Jackson—involving members of Jackson County’s (Michigan) Board of Commissioners opening government meetings with invocations. This case recently saw important court action in the U.S. Court of Appeals for the Sixth Circuit in Cincinnati. First Liberty stepped in to represent Jackson County after the Sixth Circuit panel ruled 2-1 against the commissioners’ invocations earlier this year.

Last week, on June 14, the full Sixth Circuit reheard the case en banc—with all of the court’s 15 judges reviewing the case—after the three-judge panel ruled against the commissioners.

“Legislatures at the federal, state and local levels nationwide have opened their sessions with invocations for more than two centuries, as the Supreme Court has twice recognized in upholding this widely accepted practice,” said Ken Klukowski, First Liberty Senior Counsel. “Jackson County’s invocations are fully consistent with the Constitution and the Supreme Court’s guidance on this issue.”

The nine-member Jackson County Board of Commissioners begins each meeting with an invocation given on a rotating basis by commissioners who voluntarily choose to participate. Commissioners are free to follow their conscience, whether that means offering an invocation or a moment of silence.

However, in 2013, Peter Bormuth, a local activist and self-described Pagan and Animist who had attended some of the commissioners’ meetings, sued over the invocations. He argued that invocations constitute the establishment of an official religion in Jackson County.

A federal district court ruled in favor of the county, with the judge noting that “Bormuth’s subjective sense of affront” was “insufficient to sustain an Establishment Clause violation.” However, a three-judge panel of the U.S. Court of Appeals for the Sixth Circuit overturned this decision, ruling that the invocations were unconstitutional.

ON THE PATH TO THE SUPREME COURT?

This is especially so because of the possibility of a “circuit split” in which federal appeals courts disagree. A similar major case has also been working its way up the federal court system: Lund v. Rowan County, in which the American Civil Liberties Union (ACLU) challenged the practice of county commissioners opening meetings with invocations. First Liberty is representing five Rowan County, North Carolina, commissioners in this case.

First Liberty is currently waiting for a ruling in both cases. Contradictory rulings issued by the Sixth and Fourth Circuits would create a “circuit split.” In a recent op-ed, First Liberty Senior Counsel Ken Klukowski speculated that if this occurs, both the Jackson County and Rowan County cases would be “prime candidates” to be heard by the Supreme Court.

LEGISLATIVE INVOCATIONS: AN AMERICAN TRADITION CONSISTENT WITH THE ESTABLISHMENT CLAUSE

Legislative invocations have a long and time-honored American history. In fact, the First Congress—famous for being the body that crafted and approved the language of the First Amendment, which contains the Establishment Clause—created the positions of Senate Chaplain and House Chaplain. These chaplains, who were given a salary, had the duty of giving invocations every day Congress was in session.

Legislative invocations, even those led by elected officials such as Jackson County’s commissioners, are consistent with the Establishment Clause. As Klukowski noted in his editorial, “Because these invocations do not establish an official religion, as ‘establishment’ has been historically understood, and because the invocations do not require or coerce anyone to participate, they are perfectly constitutional.”

The stage is set for legal action that could ripple into the future, affecting the religious freedom of generations yet to be born. First Liberty will continue to defend the constitutionality of legislative invocations, a time-honored practice with a rich American heritage.