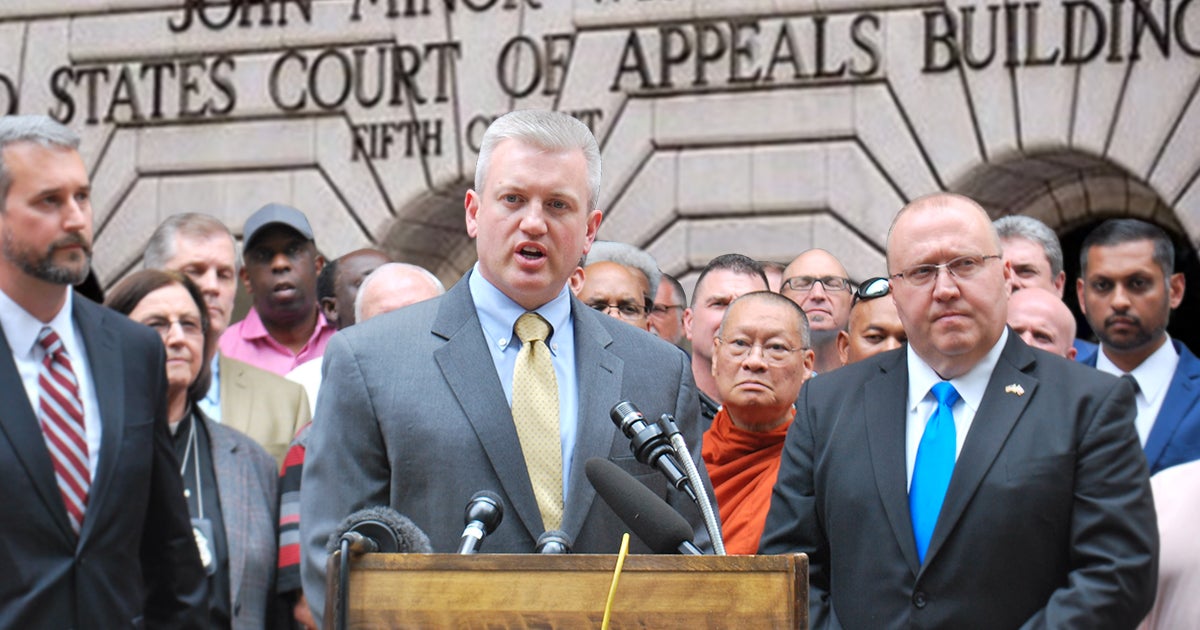 This week, First Liberty’s legal team—alongside our volunteer attorneys at Gibson, Dunn & Crutcher LLP—argued before the U.S. Court of Appeals for the Fifth Circuit in defense of our client, Judge Wayne Mack.

For more than six years, Judge Mack—a Justice of the Peace in Montgomery County, Texas—has endured relentless legal attacks. Why? Because of his volunteer chaplaincy program, to which he invites religious leaders of every faith in his community.

Through this program, they have an opportunity to offer remarks and, if they choose, a brief opening prayer before courtroom sessions. For this, the Freedom From Religion Foundation (FFRF) has persistently taken Judge Mack to court, alleging the invocation is unconstitutional.

A federal district court invalidated the volunteer chaplaincy program in May of last year. But the Fifth Circuit reviewed that bad decision and issued a stay, allowing chaplains to continue offering invocations while the case is being considered.

During this week’s oral argument, our attorneys explained why Judge Mack’s chaplaincy program is constitutional, noting that legal precedent has repeatedly upheld chaplain-led invocations. It’s a practice consistent with our nation’s rich historical tradition of opening government proceedings with an invocation—one that dates back to the Founding and even to the first Justices of the U.S. Supreme Court.

A Practice Born of Compassion, not Coercion

In attacking Judge Mack, groups such as FFRF often argue the practice of an opening invocation is coercive. But that’s simply not true.

Judge Mack goes to great lengths to inform all attendees (even those whose court attendance is mandatory) that they are free to leave the courtroom during the opening ceremony. No one who stays is required to participate in the prayer. What’s more, volunteer chaplains do not engage in proselytization or denigration of other beliefs.

Opponents of religious freedom are quick in their attempt to malign Judge Mack, but a brief look at the history of his volunteer chaplaincy program shows he’s following the best of America’s traditions and history.

Seven years ago, Judge Mack was called as coroner to the scene of a tragic accident that took a young woman’s life. While at the hospital, her family requested a chaplain, but the hospital chaplain wasn’t available.

After trying in vain to find a volunteer chaplain for the family, Judge Mack resolved to establish the chaplaincy program to help counsel and comfort grieving families at tragic death scenes or on death-call notifications. Far from the malicious attacks levied against him, Judge Mack’s program was borne out of compassion and a desire to care for the members of his community.

Although the FFRF alleges that religious expression has no place in our public institutions, chaplain-led courtroom prayers have a storied history that can be traced back more than 200 years, as far back as the Founding generation.

For example, the U.S. Supreme Court has opened its sessions with the prayer “God save the United States and this Honorable Court” since at least the time of Chief Justice John Marshall in the early 1800s.

After ratification of the U.S. Constitution, both the House of Representatives and the Senate selected chaplains. Today, chaplains continue to pray or offer an invocation at the beginning of each day’s sessions.

Judge Mack’s practice is fully consistent with the Constitution. Instead of violating any constitutional principle, chaplain-led invocations embrace our nation’s history and tradition of solemnizing judicial proceedings.

Hope for a Future Victory

As we wait for the Fifth Circuit ruling, there are reasons to be hopeful. Recall that in its stay issued last year, the Fifth Circuit said Judge Mack “made a strong showing that the district court erred” and added:

“…As to FFRF’s individual-capacity claim, that too is likely to fail. The Supreme Court has held that our Nation’s history and tradition allow legislatures to use tax dollars to pay for chaplains who perform sectarian prayers before sessions.”

With this key ruling in hand—plus ample legal precedent upholding the constitutionality of chaplain-led invocations—First Liberty is confident we can bring an end to FFRF’s harassment of Judge Mack.