This year’s award went to one man who has repeatedly partnered with First Liberty in defense of veterans memorials and religious freedom. 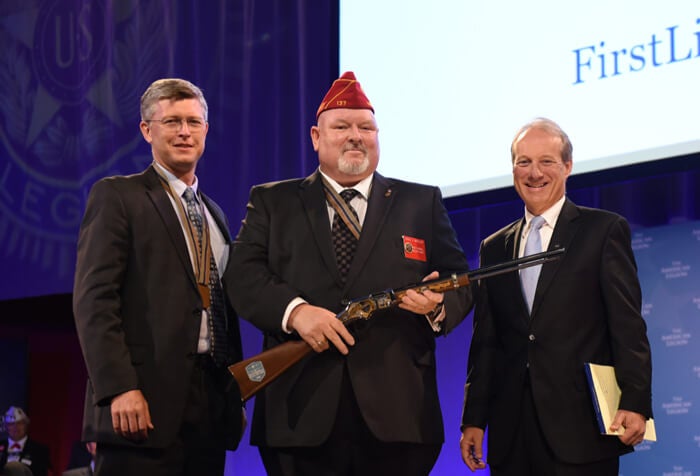 For the second year in a row, during the main session of The American Legion National Convention, First Liberty President and CEO Kelly Shackelford presented on Tuesday the Philip B. Onderdonk Jr. Religious Liberty Award to a champion of religious freedom.

Named after Phil Onderdonk, the Legion’s longtime judge advocate and the award’s inaugural recipient, each year the award recognizes one of the many heroes that have worked alongside First Liberty to restore and defend religious freedom for all Americans.

Wheeler “has been with us every step of the way as we have defended the religious liberty of our veterans, the memorials that honor them and our national heritage,” Shackelford said as he presented the award at the convention in Cincinnati.

Each year, First Liberty presents the recipient of the Onderdonk Award with a Henry Repeating Arms Military Service Tribute Edition .22 caliber lever action commemorative rifle specially engraved for the award. The rifle is donated by Henry Repeating Arms, who are huge supporters of military service members and veterans.

Wheeler—who did not know he would receive the award—was visibly shocked when his name was announced.

Wheeler is a proud Vietnam War veteran of the U.S. Navy. After his service in the military he became a journalist. Today he oversees all of The American Legion’s national offices, including the national headquarters. He previously held multiple positions with The American Legion Magazine, including publisher and editor in chief.

But one of Wheeler’s most important roles as a leader of The American Legion has been taking up legal arms against attacks on memorials and displays that honor the nation’s military veterans. Indeed, Wheeler has led the way in coordinating the Legion’s efforts to partner with First Liberty in defense of religious freedom as veterans memorials around the country have come under attack by organizations such as the ACLU.

Shackelford said it is thanks to Wheeler that The American Legion has partnered with First Liberty so many times throughout the years to preserve such critically important memorials and other patriotic expressions of our national heritage.

“His leadership has been essential to the Legion’s work defending our national heritage from continued and unrelenting attack,” Shackelford said Tuesday.

THE BATTLE TO DEFEAT ANTI-RELIGIOUS DISCRIMINATION

Once upon a time in America, veterans memorials with religious imagery or text were beyond question. Then in the 20th century, secular organizations gained a powerful foothold in society and government. And veterans memorials that include religious text or imagery, no matter how traditional or ingrained in the culture, became targets.

In response, First Liberty and The American Legion have worked side-by-side for years to defend America’s veterans memorials and other expressions of patriotism and gratitude to our military veterans.

The teamwork has paid off. The American Legion’s commitment to veterans and First Liberty Institute’s promise to defend veterans’ religious rights and memorials with religious imagery combine to create a strong alliance that honors the service and sacrifices of our nation’s military service members.

In recent years, First Liberty and The American Legion have worked together to save several veterans memorials:

“The American Legion has been absolutely instrumental in helping us defend the rights of veterans and veterans memorials,” Shackelford said.

To read more about The American Legion’s 98th National Convention in Cincinnati, visit their website.