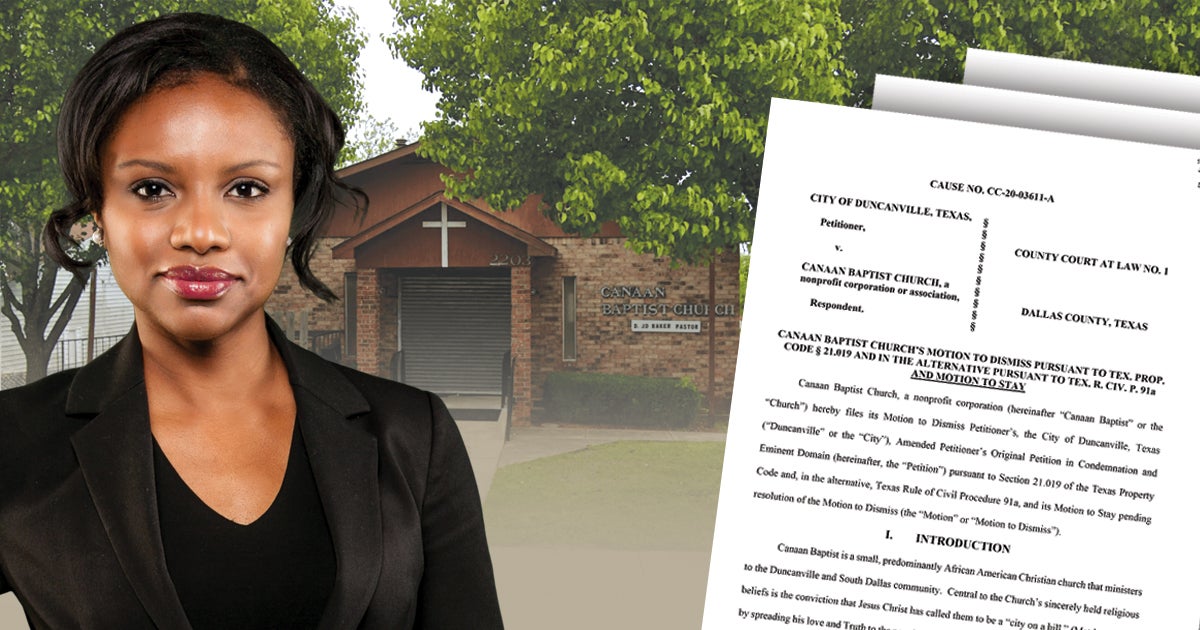 The city wants to acquire the church’s property to build “a fire station, public safety facility and/or other related improvements.” What’s most confusing about the city’s petition is that there are other properties available to the city that would not require them to take the church’s land.

Of course, the city’s use of eminent domain isn’t just a threat to the church’s property, it would also violate the Texas Religious Freedom Restoration Act and undermine the church’s ministry to the local community.

Like thousands of houses of worship nationwide, CBC uses its property to serve the community in the South Dallas and Duncanville area.

CBC actively lives out its beliefs by tending to the needs of “the least of these.” For over 50 years, CBC has served its community in a variety of ways, through clothing giveaways, care for the homeless, voter registration drives and countless others. Those they serve include many low-income, underserved and disenfranchised community members.

Unfortunately, this isn’t the only threat to religious freedom that First Liberty is currently fighting in the Lone Star State.

In the City of Magnolia, local authorities have levied an “institutional fee” (which really amounts to nothing more than a tax in disguise) on churches, faith-based schools and other nonprofit organizations. Knowing they can’t impose taxes on a religious institution, Magnolia officials have developed an underhanded scheme to squeeze money out of houses of worship and faith-based entities.

Let’s keep in mind that in America, we have a longstanding history of protecting and exempting our religious institutions from taxes because of the incredible contributions, services and impact they have in local communities all across the country.

In their search for revenue, local officials in Magnolia increased the water and wastewater fees of local churches and nonprofits to significantly higher rates than that of commercial businesses. In one case, a church’s water bill increased by 178%.

The city administrator even publicly stated the water fee scheme “would allow the city to collect funds from these entities in place of taxes or other fees.”

Officials went as far as to travel several hours away to Austin, the state’s capital, without the churches knowing, where they sought approval for their water fee scheme and to block out any possibility of a legal remedy. Only when the local congregations sued Magnolia several months later did they learn of the city’s subterfuge.

That’s why First Liberty presented our case at the Texas Third Court of Appeals on behalf of three churches arguing that cities must, at the very least, give due process to churches before raising their water fees.

Houston Discriminates Against a Jewish Congregation

A short drive south of Magnolia, religious discrimination is also taking place in the city of Houston, where authorities are seeking to enforce restrictive city ordinances against religious communities. In fact, local officials have barred a Jewish congregation from holding worship services in their neighborhood, even though other businesses are operating there.

The members of the congregation, Heimish of Houston, are limited to holding religious gatherings in their communities because their religious beliefs prevent them from driving on the Sabbath. Many members purchased homes near the location of the synagogue for this very reason.

In this case, First Liberty has intervened and asked the city to stop its attack on the religious liberty rights of Heimish of Houston and allow its members to meet without interference.

Not only is it unconscionable for government officials to seize church property, but the open threats and discrimination towards religious communities also rips at the very fabric of our nation’s heritage and history as a religious safe haven for people of all faiths.

America’s Founders crafted the Constitution (and more specifically, the First Amendment) to ensure government couldn’t trample and take away the rights (and property) of the church.