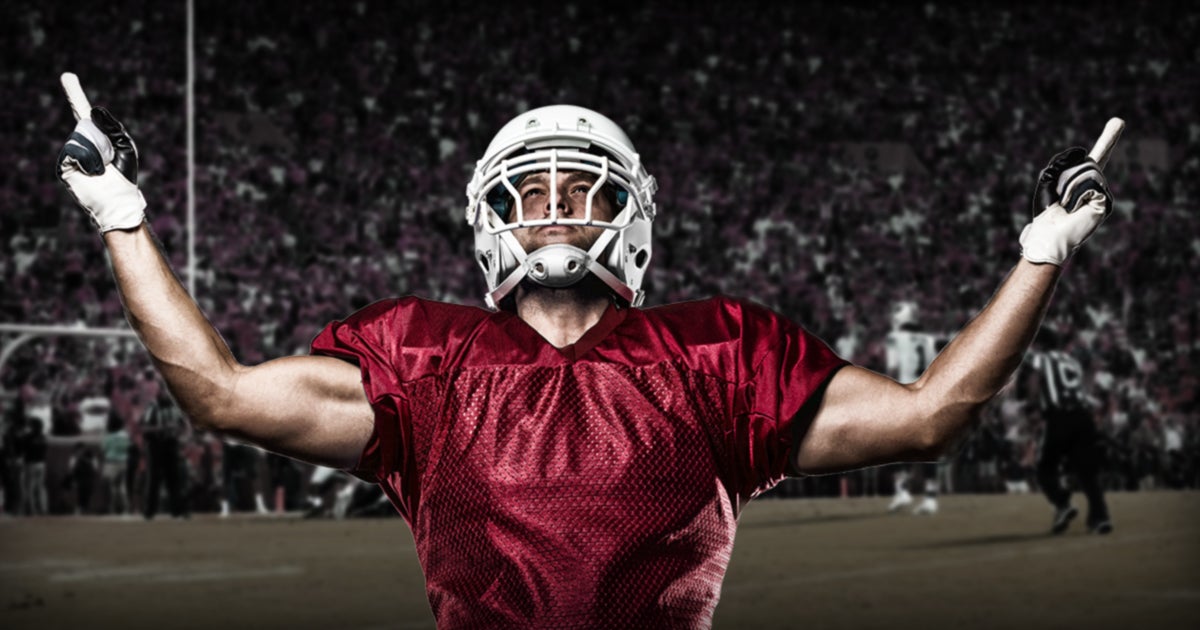 With Super Bowl Sunday only a couple of days away, millions of Americans are focused on getting ready for the Big Game.

However, Super Bowl weekend is about much more than just watching some of the nation’s best athletes go head-to-head. For many fans, it’s an opportunity to carry out their favorite game-day traditions with friends and family.

Whether it’s sitting down to enjoy a hot bowl of chili, potluck tailgating before the game, wearing a jersey for good luck or making sure that you don’t miss a single commercial…football fans nationwide have peculiar traditions they do every year.

Even the White House gets in on the action. It’s a longstanding tradition for the President to predict who he thinks will win the game.

Super Bowl traditions are likely the most visible to Americans. But there are many other game-day traditions that accompany football all throughout the year.

Though often overlooked, faith continues to be a big game-day tradition…and fans, players and coaches—even franchise CEO’s—across the nation are living it out more boldly than ever before.

Growing attacks on people of faith mean you can no longer sit on the sidelines. We need supporters like YOU on our team. Will you join us in the fight to reclaim religious liberty nationwide?

To highlight one example, consider how important faith is for the staff at the Kansas City Chiefs, who will be making their first Super Bowl appearance in 50 years on Sunday.

A devout Christian, Chiefs owner and CEO, Clark Hunt, seeks to make faith a top priority for his staff, which is why he’s built an organizational culture centered on spiritual development. Since becoming the Chiefs chairman in 2005, Hunt has employed a chaplain for the team.

But his commitment to spiritual fitness isn’t just limited to players or employees of the Chiefs franchise.

Since 2014, the Chiefs have partnered with the Fellowship of Christian Athletes and local churches to offer their fans a nondenominational pre-game chapel service at Arrowhead Stadium. Football schedules often conflict with normal Sunday worship services, which means fans may miss the opportunity to attend church if they go to a Chiefs game. With this initiative, however, fans can attend a worship service held in a pavilion at the stadium before the game, which features a message and religious songs.

This recurring service is the first of its kind in the National Football League (NFL) and takes place every week the Chiefs play a noon home game. Mr. Hunt, his wife and family regularly attend.

Beyond the NFL, expressions of faith are also commonplace in collegiate, as well as high school football.

At the College Football National Championship Game a few weeks ago, for example, players from both Louisiana State University and Clemson University could be seen kneeling at the end zone praying together before kickoff.

And if you were watching the pre-game show, you’d have noticed Grammy-award winning Christian singer, Lauren Daigle, was invited to perform the national anthem at this event, serving as more evidence that people of faith continue to actively participate in some of our nation’s most beloved football traditions. 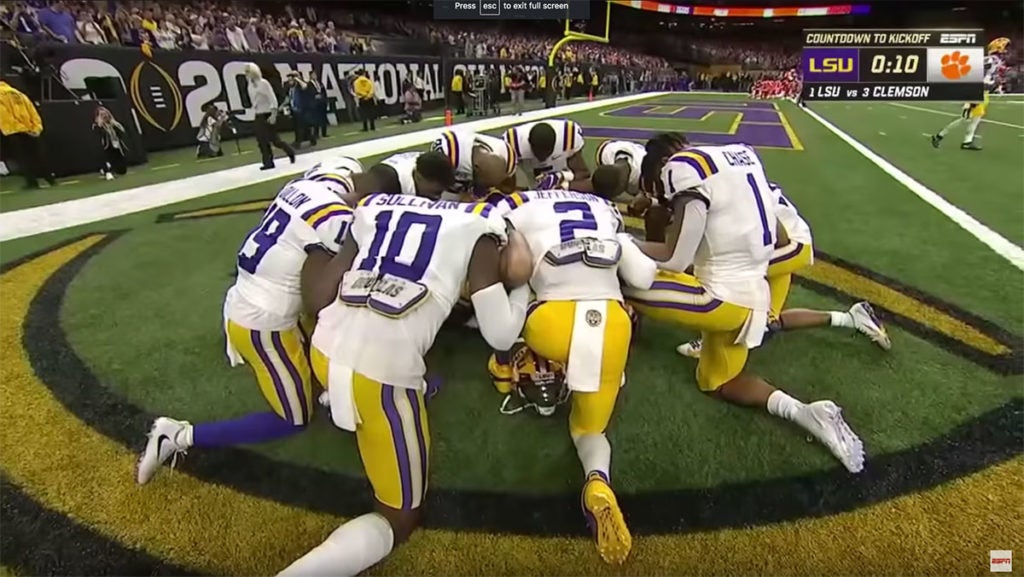 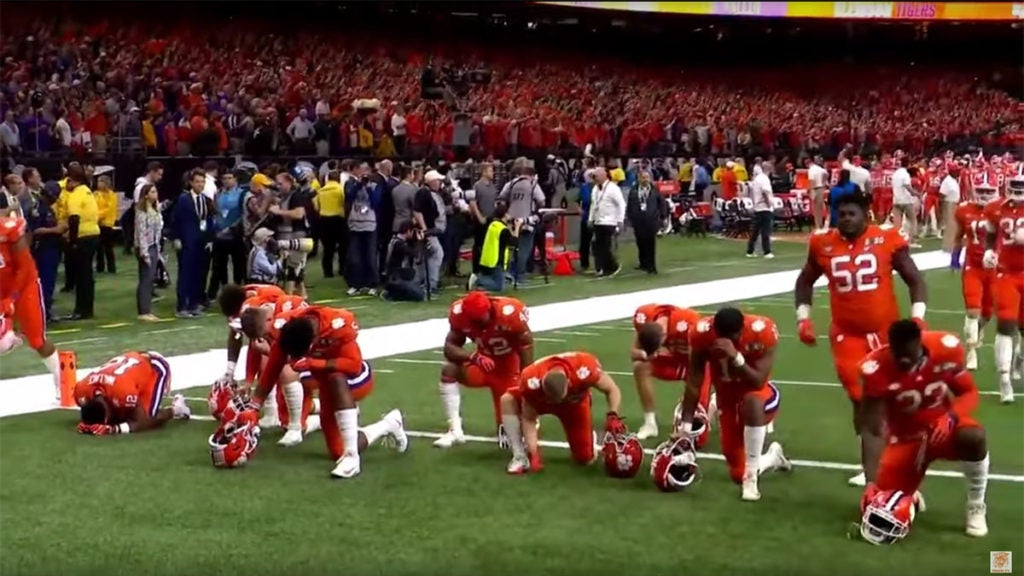 Similar to the Chiefs organization, Clemson football coach William “Dabo” Swinney uses faith as a core part of his development plan and as a way to bridge the gap between players and coaches.

Like his predecessors, Coach Swinney integrates faith into Clemson’s football culture, allowing freedom for all, providing players voluntary opportunities to pray with him and other coaches, as well as making a team chaplain available, holding chapel services for the team every Friday and inviting players to come to church with him if they would like—all common practices in football programs nationwide today.

In America, it should come as no surprise to find religion mixed with sports, especially when you consider that people of faith have been living it out on the field for decades and have helped shape the rich history of football in our nation.

From former quarterback Tim Tebow’s famous Bible verse eye paint, to teams huddling and holding hands to pray, to players openly giving glory to God after games, athletes and other members of the football community routinely live out their faith—before, during and after games.

Sadly, you’ll increasingly find anti-faith activists and the zealots of the “cancel” culture doing whatever they can to stop these emotive expressions of faith.

Perhaps the most glaring example of this All Out war on faith on the field is Coach Joe Kennedy, who was fired from his high school coaching job because he knelt for a private, silent prayer on the field after games. His case made it all the way to the U.S. Supreme Court and now First Liberty is currently fighting for Coach Joe a second time at the district court level to achieve a final victory that will vindicate his rights.

Yet, while opponents of religious freedom are dialing up their attacks, people of faith aren’t afraid to put their beliefs into practice. What’s more, many of them, like Coach Joe, are standing strong by their religious convictions because they know a playbook called the U.S. Constitution is what safeguards their right to live it out.

With the unprecedented reclamation of religious liberty happening in our country—and with First Liberty’s championship legal team ready to be their first line of defense—Americans should feel more encouraged and hopeful than ever before. Whether on the field, on the sidelines, in the locker room or in the stands, this is a unique moment to allow freedom for all and keep faith a vibrant part of our football tradition.