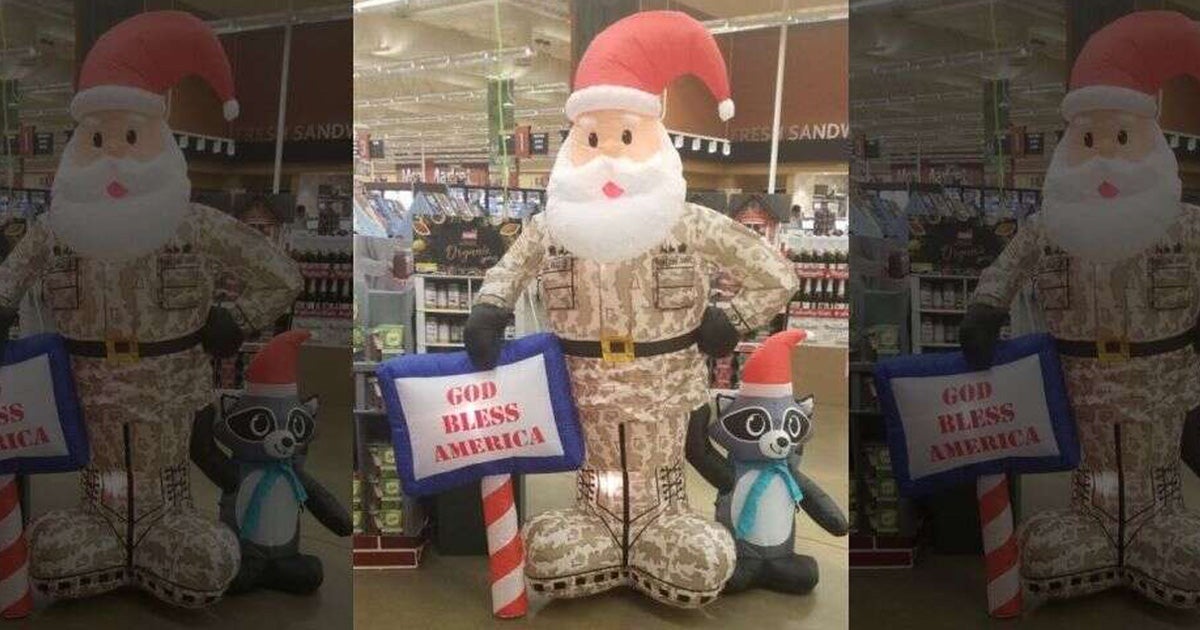 For the anti-religion activists at the Military Religious Freedom Foundation (MRFF), it’s not enough to insult our military service members by attacking their constitutional right to live out their faith.

Now, they’ve even found a way to undermine military religious freedom and deflate the holiday cheer at the same time…in one of the most ridiculous ways you can imagine.

They recently complained about an inflatable Santa Claus on an Army base.

Yes, this time they’re going after a “Soldier Santa” that’s on display in the commissary at Fort Belvoir in Fairfax County, VA, which stands wearing operational camouflage and whose lapel reads “Christmas Force.”

The MRFF has once again invented a problem where none exists, claiming the figure is unconstitutional because it’s holding a small sign with the phrase, “God Bless America.”

Not only that, they really blew up the Christmas spirit by arguing the inflatable display is supposedly creating “mandatory situations where they’ve [soldiers] been forced to engage in blessing for Jesus Christ.”

These zealous opponents of religious liberty apparently think that an inflatable Santa Claus is an actual military officer who speaks for the government…someone with sufficient authority to force and impose his religion onto others.

Of course, the MRFF is just blowing more hot air by making those claims.

It’s completely within the bounds of the Constitution and military law for service members, including officers, to say “God Bless America,” just as the Commander-in-Chief does on a routine basis.

And while we may initially look at this most recent attack on “Soldier Santa” as silly or abnormal, it does point us to a more serious and pervasive problem.

It shows us the extent that enemies of religious liberty are willing to go in order to scrub all religious expression from American life—and our brave military heroes aren’t immune to the all-out war against faith.

Please join us as we fight for the rights of our veterans and service members.

They need YOUR financial support to help put a stop to the barrage of violations against their religious liberty.

In that case, the MRFF sent a legal demand to the Department of Defense claiming Shields of Strength tags are unconstitutional, and that it’s illegal to display religious messages on them because they use the emblem of several military service branches. What’s more, they demand the tags be pulled immediately.

It would seem that a beloved source of encouragement and inspiration for those who serve would be something everyone could agree on.

Instead, the MRFF insists on threatening the fundamental rights for which our service members sacrifice—the freedom to live out their faith.

This certainly isn’t the first time opponents like the MRFF have launched a brazen and desperate assault on religious liberty in the military. And as we prepare to usher in a new era of religious freedom and prosperity in 2020, it’s more than likely that some will ramp up their hostility against people of faith who serve and sacrifice for our freedoms.

So, whether it’s a beloved and cherished source of inspiration like a Shield of Strength dog tag, or a harmless Santa Claus display during the Christmas season, First Liberty is always ready to be First in the Fight ® and make sure outside, anti-faith groups don’t get away with blatant anti-religious harassment.