Since its founding, America has shined as a beacon of freedom worldwide. For over two centuries, our nation has been a safe haven for the religiously oppressed, a place where people of all faiths can peaceably live according to their beliefs and their faith.

But within the past year, we’ve witnessed an unprecedented assault on America’s First Freedom.

In 2020 alone, we’ve seen government officials abuse their power to deem churches as “nonessential,” threaten pastors with arrest and impose unconstitutional orders to keep people of faith locked down indefinitely. Indeed, to assume religious oppression is a far-off threat is to ignore the rising tide of anti-faith hostility in our nation.

Of course, America hasn’t been the only nation plagued by rising intolerance and restrictions on religion, including this recent surge in attacks on religious liberty.

The Pew Research Center recently reported that in 2018 “the global median level of government restrictions on religion—that is, laws, policies and actions by officials that impinge on religious beliefs and practices—continued to climb, reaching an all-time high since Pew Research Center began tracking these trends in 2007.” 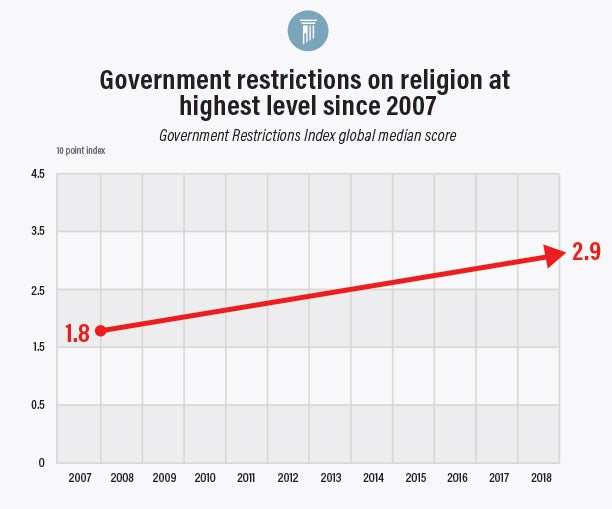 According to Pew’s research methodology, this represents approximately a sixty-one percent (61%) increase in government restrictions on religion in the past decade.

But if this weren’t alarming enough, consider that this latest report doesn’t factor in the recent coronavirus lockdowns and emergency orders that have forced churches to remain closed, penalized religious organizations with excessive fines, threatened to send pastors to jail and attacked the fundamental right of people to freely gather for worship.

Coupled with the wave of restrictions and government mandates, there’s been a spike in violence, vandalism and destruction of houses of worship and religious symbols, a pattern that’s clearly made its way into America’s shores:

Additionally, Pew’s analysis and data reinforce the notion that authoritarian regimes will always seek to destroy and undermine religious liberty first, because these regimes cannot tolerate their citizens having an allegiance above the government.

In other words, once government seeks to throw religious freedom by the way side, it has the precedent to set aside other fundamental liberties.

Why Should This Concern Us Here in America?

Pew’s data leaves us with an important lesson…or more appropriately, a warning: Nations with high levels of religious oppression and restrictions are more prone to chaos, social unrest, hostility, corruption and ultimately, the downfall of freedom and democratic values altogether.

Here in America, we would be wise to heed the warning signs and consider these violations of freedom could only be the beginning of more pervasive forms of discrimination and violence. Every new restriction and every new attack that violates the Constitution could take our nation—built on the promise of religious freedom for all—one step closer to tyranny.

In 1774, John Adams so presciently warned:

“Nip the shoots of arbitrary power in the bud, is the only maxim which can ever preserve the liberties of any people.”

In light of the threats and attacks surfacing both at home and abroad, it’s clear why the fight for our First Freedom is the most essential fight of our lifetime. For our nation to continue to exist as the land of the free, we must protect the right of all Americans to live out their faith without fear of punishment, repression and without having to seek the government’s “approval” to safely gather for worship during a pandemic.