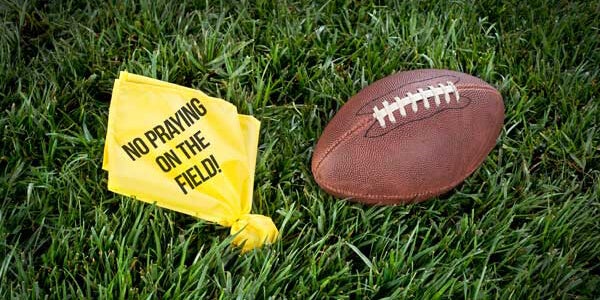 For opponents of religious freedom, the football field has somehow become the “red zone” of religious liberty.

They constantly clamor, “No praying on the field!”

Now, as summer camps heat up and players start pouring over their playbooks, First Liberty brings out a winning game plan of our own. Our playbook has all the X’s and O’s necessary to help ensure your team is well-equipped physically and constitutionally.

Students Have First Amendment Rights On The Field

First, students often don’t exercise their faith in public schools because they believe it is illegal to do so. Radical opponents fabricated this misguided notion in an effort to suppress religious expression, but it is simply a distortion of the freedoms afforded to students by the First Amendment.

The fact is that students retain First Amendment rights even in a public school setting. As the U.S. Court of Appeals for the Eleventh Circuit once explained, the Constitution “does not permit [a public school] to confine religious speech to whispers or banish it to broom closets. If it did, the exercise of one’s religion would not be free at all.”

And let’s not forget that the U.S. Supreme Court has also clarified that students and teachers do not shed their constitutional rights at the schoolhouse gate – and that includes the football field.

Coaches, Staff, & Guests Don’t Have To Check Their Rights At The Stadium Entrance

Secondly, coaches, school staff, and even invited guest speakers do not have to check their constitutional rights at the admissions gate before entering the field of play.

The First Amendment, for example, protects coaches and religious leaders who engage in private religious expression when they are on the football field. One common argument against displays of faith is that based upon your occupation – i.e. being a coach or a pastor – you have to forfeit your constitutional rights while you are on school grounds.

In fact, First Liberty has had to step in on two cases concerning this violation of rights – Coach Kennedy and Pastor Konnor McKay.

Bremerton High School fired Coach Kennedy from his coaching job because he kneeled in a private, silent prayer on the field after each of his games. More recently, an atheist group asserted that, because he was a pastor, Konnor McKay should be disqualified from giving an inspirational talk at a summer football camp.

Coach Kennedy and Pastor Konnor both took actions fully within their rights. But because they did so on public school property, they were mistakenly told that they had no First Amendment rights. Simply put, no one should have to check their rights at the gate. What keeps the playing field level for religious freedom in our nation’s schools and the football field is the playbook we call the U.S. Constitution.

Finally, simply because an action takes place on public property, does not mean it is a government-endorsed event. For example, a religious school and its students praying before a game is an action protected and upheld by the First Amendment, and it is not the same as government endorsing or preferring a specific religion. Exercising your religious beliefs, whether it be on government property or not, is a constitutionally protected right for every American.

In the case of Cambridge Christian School, its football team was denied the right of praying over the loudspeaker before a state championship game, a tradition carried out in nearly every game since the program’s inception. Officials with the Florida High School Athletic Association prohibited the prayer because they thought it would be an endorsement of religion, merely because the prayer offered by the Christian school would be on government property.

But the law and the Constitution affirm that students can pray, either individually or as a group, at school athletic competitions, student assemblies, or other extracurricular activities. First Liberty continues in the fight to defend the fundamental rights of Cambridge’s players at the U.S. Court of Appeals for the Eleventh Circuit, only one step below the U.S. Supreme Court.

A Legal Team With a Winning Record

While radical groups create hostile uproars, they can’t ignore that First Liberty has a championship legal team of its own. And we have a winning record that speaks for itself.

On multiple occasions, we’ve successfully defended students and their rights to express their faith in school as protected by the Constitution, including cases like the Kountze Cheerleaders, whose religious-themed run-through banners were banned by school officials.

And of course, our victories aren’t just on the football field. We’ve restored the First Amendment rights of numerous students, teachers, and other public employees in our nation’s schools.

The next time that you are told not to express your faith on school grounds, make sure you have First Liberty’s top-notch legal team on your side to defend your rights.

Don’t Be Blind-Sided By Their Attacks!

Make the right call by contacting us immediately
if your rights are infringed while on the field.