Hanukkah: The Jewish Festival of Lights 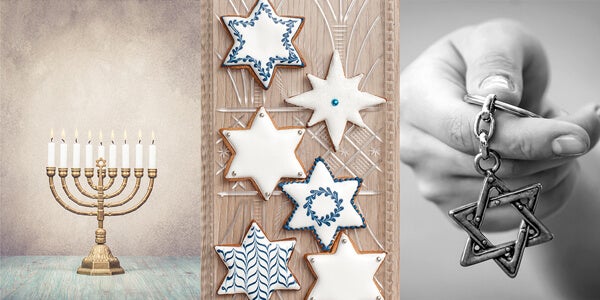 In this special feature for Spiritual Literacy Month, we are looking at the celebration of Hanukkah, a holiday with traditions that span over two thousand years. Let’s take a look back at what this celebration is all about.

At sundown on the 25th day of Kislev (the ninth month of the Hebrew calendar), Hanukkah commences. This Festival of Rededication, often known as the Festival of Lights, is an eight-day celebration of remembrance and rededication.

But what led to this celebration? Let’s find out!

The Origins and History of Hanukkah

When Israel was under the Syrian-Greek Empire, the Temple in Jerusalem had been desecrated and set up as a house of worship to Zeus. A faithful Hebrew priest, Mattathias and his family, known as the Maccabees, led a rebellion for several years to restore Israel’s independence and their ability to worship Yahweh properly. According to the second book of Maccabees, the time for the festival of Sukkot (The Feast of Tabernacles, which is a remembrance of Yahweh’s provision for the Israelites in the wilderness) passed shortly before their victory. But the Jewish people did not celebrate because the Temple was not in order.

However, when they did achieve victory, they began to restore the Temple and they celebrated the Feast of Tabernacles in conjunction with a rededication of the Temple to Yahweh.

As part of their Temple worship, the Jewish people used oil to light a golden menorah (a golden lampstand with 7 branches) from evening until morning each day. But the oil in the Temple had been desecrated by the Greeks, which prevented them from carrying out the menorah lighting. Fortunately, they found a trace of uncontaminated oil, enough to last for one day. It was used to light the menorah and miraculously lasted eight days, allowing time to bring in pure oil.

And from this, Hanukkah came to be.

The Feast of Tabernacles resumed its proper time of observance, but a new celebration formed. Hanukkah: a time to remember Yahweh’s deliverance of His people from their enemy, the rededication of the Temple to the worship of Yahweh, and remembrance of the miracle of the sustained oil.

Today, Hanukkah is still emblemized through the use of a lamp. Originally, Hanukkah lamps did not have branches. Over time, however, linguistic similarities used in speaking about the lamps led to the hannukiah, a lamp with nine branches: eight level branches with an additional elevated central branch for the shamash, the candle used to light the other candles. Traditionally, the hannukiah is placed in a window or to the left of an external door.

During Hanukkah, families gather each evening around sunset for prayer. Then the candles, or sometimes oil, will be added to the hannukiah, one per day, from right to left. The previous day’s candles are replaced with new ones each day. The candles are then lit from newest to oldest while singing the “Hanerot Halalu,” which is translated to say:

“We kindle these lights to commemorate the miracles and the wonders and the acts of salvation and the battles that You fought in behalf of our ancestors long ago, at this time, through Your righteous priests. And during all the eight days of Chanukah, these lights are holy! And we have no right to make use of them, but only to behold them, in order to give thanks and to praise Your great Name, for Your miracles, and Your wonders and Your acts of salvation.”

Song may continue after the lighting with “Maoz Tzur,” a remembrance of Jewish history, and additional prayers may be offered.

Latkes, fried potato pancakes, and sufganiyot, jelly doughnuts, are traditional Hanukkah foods, prepared because they are fried in oil, in remembrance of Yahweh’s provision of oil. Today, a modern addition to Hanukkah celebrations is giving children gelt (money) in the form of chocolates shaped like coins, wrapped in gold foil. And, in addition to gelt, in modern Western cultures, it is not uncommon for gift giving to also occur on one or all of the nights of Hanukkah.

Finally, throughout Hanukkah celebrations, families will play games with dreidels, small spinning tops. Each side of the dreidel is inscribed with a Hebrew letter: nun (נ), gimel (ג), hei (ה), and shin (ש), which when put together mean, “A great miracle occurred there.”

Each player begins with the same number of items, typically gelt or other treats. To start, each player will put one item into a common pot. Then players spin the dreidel and act according to their outcome: nun (נ): there is no action; gimel (ג): everything in the pot goes to the player; hei (ה): half the pot goes to the player; shin (ש): the player adds one piece to the pot. If a player loses all his or her items, he or she is out. Once a player acquires all the items, he or she is the winner.

Now you know a bit more about Hanukkah, one of the many different religious practices people across the world participate in at this time of year. But we encourage you to keep exploring many of the other religious festivities that are practiced during the holidays.

And while you expand your knowledge, make sure to join First Liberty in the fight to preserve and protect religious liberty in America. Because, after all, the only way that these rich and diverse holiday celebrations and traditions can take place is by ensuring that we protect our most foundational, God-given freedom: religious freedom.