Henry Sandoz, Hero of Supreme Court Mojave Desert Cross Victory, Passes Away Even as His Legacy Lives On

Religious liberty in America will be saved or lost by the choices of everyday people in moments when their freedom is tested.

Henry Sandoz’ test began in the middle of a California desert in 2000 when a government official showed up at his door and requested Henry tear down the historic veterans memorial cross of which Henry was caretaker.

This week, Henry Sandoz’ family, friends, fellow veterans, and his attorneys, which included Liberty Institute and some of the most high-level lawyers in America, mourned his passing at age 76. And they celebrated his life—including his still-living legacy of case law that protects veterans memorials with religious imagery.

His mark on American law began that day in the desert. Henry looked back at the U.S. National Park Service (NPS) superintendent and emphatically told him he would absolutely not take down the memorial cross.

“I thank God he’s a stubborn guy,” his wife Wanda later recalled to a reporter for World News.

Hiram Sasser, Deputy Chief Counsel for Liberty Institute, which defended the memorial at the Supreme Court, said, “If Henry Sandoz had caved in, the only World War I Memorial designated a National Monument by Congress would have come down, and the ACLU’s campaign to single out and take down veterans memorials with religious imagery would have claimed its most prominent victim.” Sasser is scheduled to offer a eulogy at Henry Sandoz’ memorial service in California.

“It would have been over and done,” Wanda told World News, commenting on her husband’s refusal to back down, “and there’d be no World War I memorial.”

Henry’s decision that day began a path to the U.S. Supreme Court, which eventually resulted in a victory for religious liberty and veterans after a decade-long legal brawl. 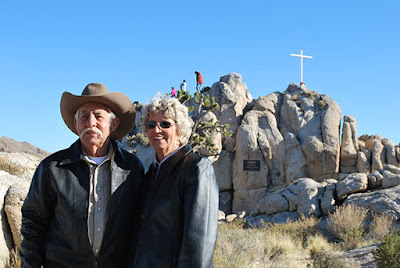 For more than 70 years, a Mojave Desert Veterans Memorial Cross stood proudly atop Sunrise Rock in the middle of the 1.6 million-acre Mojave National Preserve in California. The Veterans of Foreign Wars (VFW) first erected the memorial in 1934 in honor of World War I veterans—and near a quiet location where many of them came for healing from the trauma of war.

Riley Bembry, one of the founders of the memorial and a veteran of World War I, took care of the cross until his death in 1984. Shortly before his passing, he asked his friend, Henry Sandoz, to care for the memorial. Since that time, Henry and his wife Wanda faithfully looked after the cross.

But former NPS employee Frank Buono, living nearly a thousand miles away in Oregon, sued for the removal of the cross with the help of the American Civil Liberties Union (ACLU), contending the cross was potentially offensive, and thus a government establishment of religion since it sat on federal land.

Federal judges agreed, ordering the removal of the cross. Sandoz then offered to give the government a piece of his own land in exchange for having the memorial site transferred to the VFW. Congress approved the deal, but the ACLU and Buono continued their suit—claiming the exchange was still favoring Christianity—and they prevailed again in federal district and appeals courts. Once more, the cross was ordered torn down.

That led to the chambers of the U.S. Supreme Court for a final showdown.

THE CROSS IN THE PADLOCKED BAG 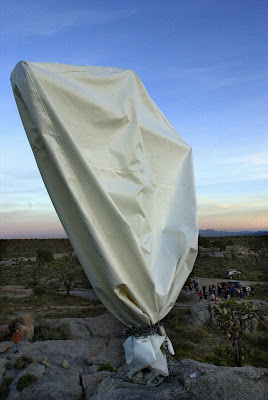 In a heartbreaking move to veterans, judges ordered a huge, heavy bag padlocked over the cross during the lengthy appeals process. Later, the bag was replaced by an even uglier wooden box. The cross was also the target of numerous vandals.

Liberty Institute stepped in and filed a critical amicus brief with U.S. Supreme Court on behalf of the VFW, The American Legion, Military Order of the Purple Heart and American Ex-Prisoners of War.The brief was written by Liberty Institute volunteer attorneys at two of America’s most prestigious firms who were well-known experts on both monuments and federal appeals law—a brief certain to have impact.

At the same time, Liberty Institute launched a nationwide awareness campaign featuring Henry and Wanda Sandoz telling the story of the memorial on a video that received nearly 2 million hits,galvanizing the veteran community. Henry, Wanda, and the Mojave Memorial Cross were Internet sensations!

In 2010, decision day arrived, and the Supreme Court reversed the lower courts’ ruling. By a 5-4 majority, the Court declared that both the transfer of the memorial and the land upon which it stood were constitutional.

And importantly for future memorials, the Court’s opinion reaffirmed the principle that religious symbols—and in particular, the cross in an appropriate setting—can have meaning and value to the culture that transcends its religious significance. That bodes well for similar memorials.

This crucial principle is still being cited today in cases such as the legal battle over the Mt. Soledad Veterans Memorial Cross in San Diego, recently settled in favor of allowing the cross to remain after an ACLU challenge, and the historic Maryland WWI Memorial cross, currently challenged by the American Humanist Association and defended by Liberty Institute and the top volunteer firm Jones Day.

In these cases and others—with massive implications for monuments with religious imagery in America—the legacy of Henry Sandoz lives on.

Kelly Shackelford, President & CEO of Liberty Institute, said, “Without Henry Sandoz, the Mojave Desert Veterans Cross would be gone. And if it had fallen, who knows what dominoes might have followed: Mt. Soledad? Maryland? Arlington National Cemetery’s crosses and religious symbols? When Henry stood up to the ACLU, he stood between them and a long line of memorials honoring our veterans. That’s the power of one humble person standing up for freedom.”